Noam Chomsky vs. Al Franken: Behind the odd progressive divide between senators, intellectuals on Gaza

Senate progressives join unanimous resolution backing Israel, but the reaction has been different elsewhere on left 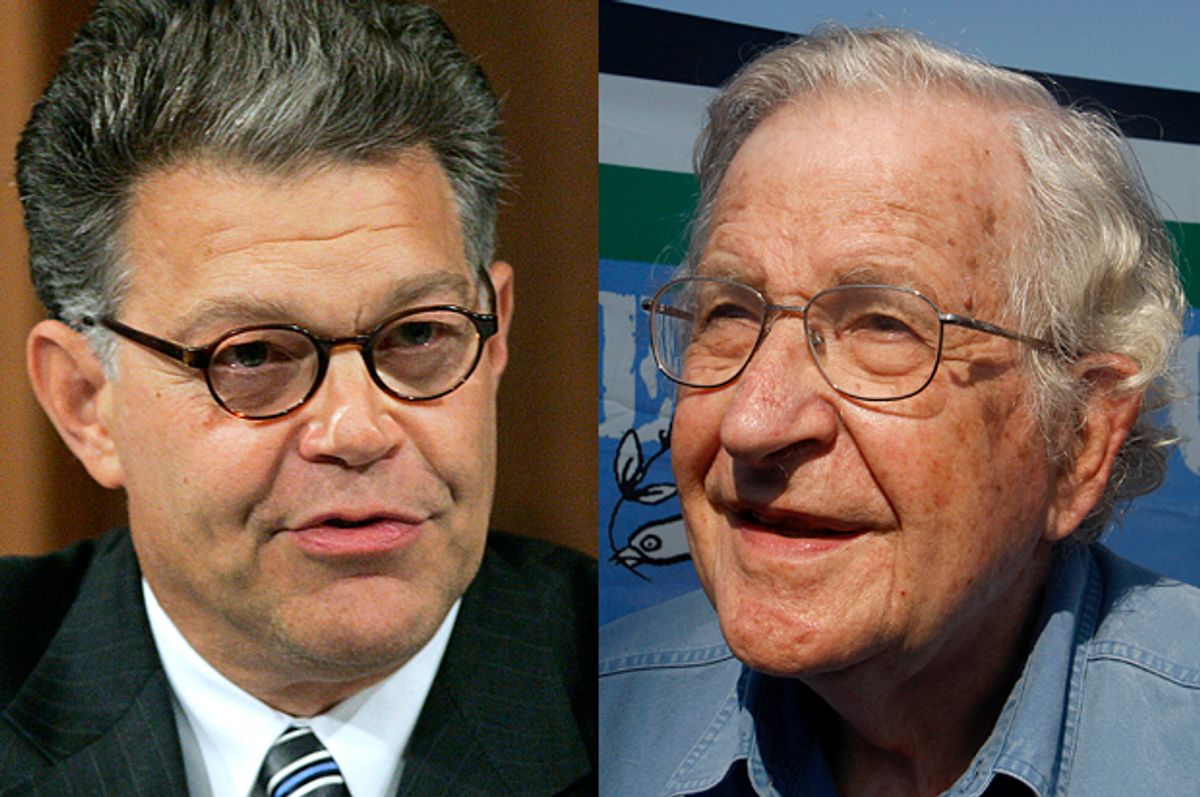 Very recently, former U.S. national security advisor Zbigniew Brzezinski had this to say about Israeli prime minister Benjamin Netanyahu’s brutal attack on and now invasion of Gaza: “He is isolating Israel. He's endangering its longer-range future. And I think we ought to make it very clear that this is a course of action which we thoroughly disapprove and which we do not support and which may compel us and the rest of the international community to take some steps of legitimizing Palestinian aspirations perhaps in the U.N.”

While it is to be expected that not all of Washington would sign on to this, it is shocking to find the U.S. Senate voting unanimously for Senate Resolution 498, which gave U.S. support for the Israeli defense forces' invasion and urges Palestinian Authority president Mahmoud Abbas to dissolve the unity governing arrangement with Hamas and condemn the attacks on Israel. The resolution calls on Hamas to immediately cease all rocket and other attacks against Israel.

Sen. Lindsay Graham, R-S.C., a co-sponsor of the resolution, was absolutely right when he said, “The United States Senate is in Israel’s camp.”

For many outside the U.S. Senate, the discovery that even progressive stalwarts such as Bernie Sanders, I-Vermont, Elizabeth Warren, D-Mass., and Al Franken, D-Minn., voted for the resolution is more than disappointing. It does more than confirm U.S. Senate support for Israel. It pushes that statement beyond any rational or ethical or moral framework imaginable.

The resolution not only gave the green light to the invasion—it gave the IDF a high-five and armaments as they crossed the intersection. All this after more than 400 civilians already had been killed by Israeli forces, the vast majority of them children. It was as if that bloodshed were not of a sufficient quantity.

The notion that the invasion would bring peace and calm is delusional. A people described by even David Cameron as living in a prison camp have no incentive to stop defending themselves from a full-scale military invasion. As one young person wrote from Gaza, “What do we have to lose?”

In its vote, the Senate decided to accept Israel’s version of the story—that it is simply defending itself against Hamas—and throw fuel on the fire. As Dennis Kucinich says in his aptly titled article, “Israel Invades Gaza Because It Can.”

While the vote was heralded by Israel and its sympathizers, it was met with outrage from not only those in the U.S. but also those abroad, who clearly read it for what it was—the signal that there would be no political solution on the horizon, at least one that would in any way be just.

To counter such symbols and to agitate toward action that will work against those murderous attacks, a number of noteworthy public campaigns have been launched.  Most important are those which have engaged a broad, international body of support, and which have appeared in multiple venues—they each form essential lifelines between scholars in Israel-Palestine and the rest of the world.  They remain active and more effective each day.  These efforts run in tandem with the world-wide demonstrations now occurring in both large metropolitan cities and small towns.

Among these international acts of solidarity are petitions, statements, letters co-authored and co-signed by people from sometime different ideological perspectives, political parties, national institutional settings, working in different languages.  One could see this as a multi-lingual, global intellectual public sphere engendered by a sense of outrage, compassion, and commitment.

To cite just a few examples, on July 10, Richard Silverstein, Joel Beinin and I wrote a statement critiquing and deploring the violence, and gathered over a hundred key endorsements from the U.S., Europe, Israel-Palestine and elsewhere.  It ran as an ad in both English and Hebrew in Hareetz, and was picked up in the United States by Truthout.  We are still taking signatures.  Also, a distinguished group of seven Nobel Peace laureates including Archbishop Desmond Tutu, Adolfo Peres Esquivel, Jody Williams, Mairead Maguire, Rigoberta Menchú and Betty Williams and 64 other international public figures signed a letter to The Guardian urging a military embargo against Israel.  The letter was then opened for more signatures, which are now pouring in.  Another such example is a French petition, emanating from The Association of Scholars for the Respect of International Law in Palestine (AURDIP), created by Ahmed Abbes, Sonia Dayan-Herzbrun, Ivar Ekeland, Jean-Marc Lévy-Leblond and Étienne Balibar, which forms solidarity with Palestinian scholars and international scholars as well.

One of the most impressive and meaningful efforts was created by Professor Haim Bresheeth, an eminent filmmaker, photographer, and a film studies scholar teaching at the School of Oriental and African Studies (SOAS) in London, who conceived of and issued “An Open Letter to Israeli Academics.” Bresheeth explained why he started this effort:

As the son of Holocaust survivors, who was born in a DP camp in Italy, and grew up in Jaffa in the evacuated home of Palestinians who were made refugees by Israel’s army and never allowed to return, I am acutely sensitized to the meaning of refugee life and its injustices.

Academics and intellectuals have, I think, a moral and socio-political duty to speak up against oppression and injustice. They enjoy heightened status and many social benefits, and must ‘speak truth to power’. If they do not, then a social collapse of the kind that happened in Germany in the 1930s or in the USA during McCarthyism, brings about a destructive social process. This has now happened in Israel, where fascist and racist tendencies have taken over the public sphere. We have called on our colleagues in Israel to play an active role in stopping the immoral, illegal war on Gaza, and assisting towards bringing about a political solution, leading to a just peace and the end of the occupation. So far, they have not risen to this challenge, unfortunately.

This letter, signed by figures such as John Berger, Angela Davis, Naomi Klein, Richard Falk and Noam Chomsky, as well as over 1,200 others, both asks Israeli scholars to voice their opposition to the attacks, and offers them international support in so doing.  This Open Letter was prompted by a call from academics in Gaza.  So far, over 60 Israeli academics have bravely responded.

As I have reported elsewhere, in Israel it is not only academics who are protesting.  On July 20th, a group of more than 200 Israeli citizens sent a letter to the European Council, Commission and the European Parliament calling on the EU to pressure Israel to accept Hamas’ terms of truce.  And as of that date, 725 Israeli citizens signed a Hebrew/Arabic language online petition supporting Hamas’ conditions as a basis for immediate and direct negotiations. Hopefully the mass demonstrations worldwide will help more dissenters to step forward as these individuals have.

As the death count rises, as Israel is more and more encouraged by votes like the one undertaken in the U.S. Senate to continue its genocidal undertaking, the task of opposing this unconscionable rampage against an already entrapped civilian population is both immensely challenging and absolutely necessary.  The enormity of the onslaught and the political machinery behind it need to be answered by a massive international movement. This is a start.