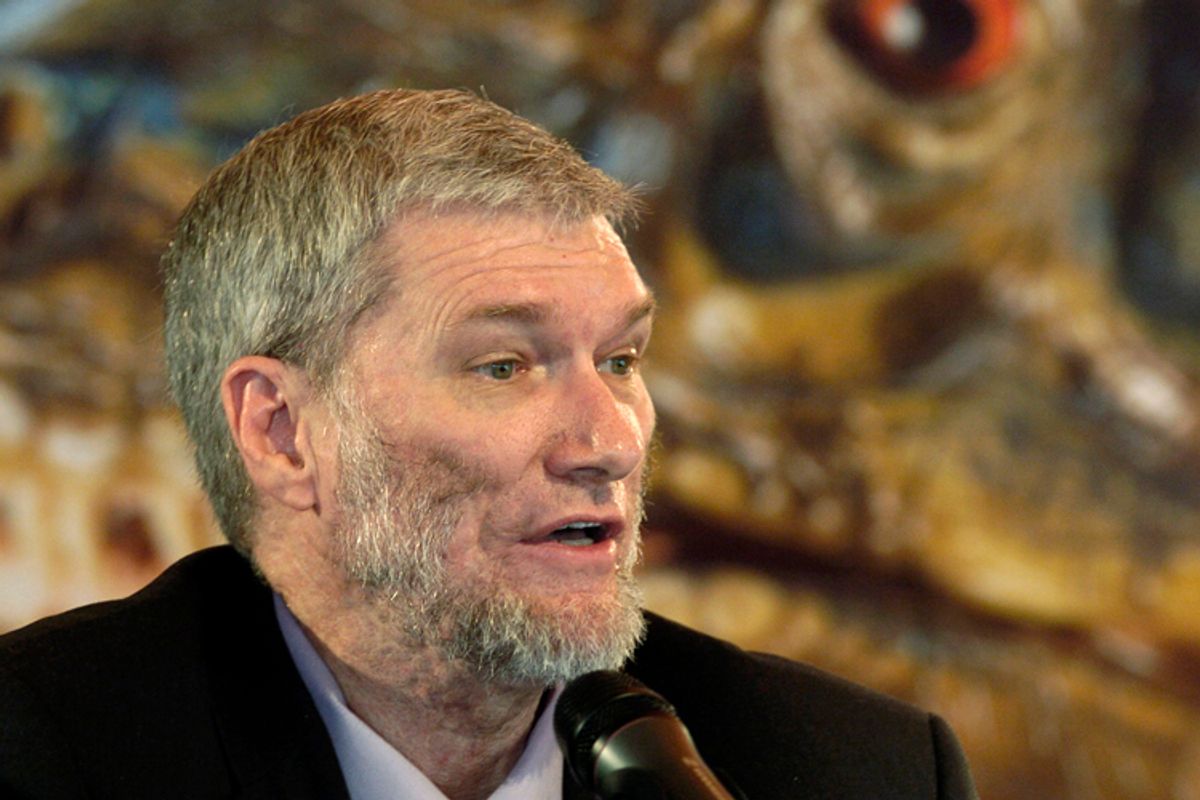 Ask certain vocal members of the Christian right about science, and it won't take you long to discover that their conception of the discipline is somewhat different from how it's normally understood. Their version of it isn't like the kind practiced at universities and in hospitals; it's a special, watered-down version of science, one that adapts to fit into their biblical view of the world.

In this Christian-right version, scientific evidence is checked against the Bible and if the evidence contradicts – or at least if they believe the evidence contradicts– a single verse in a single chapter, they simply reject the evidence and the science, no questions asked. (Exhibit A: Intelligent Design.) This method of conducting science has led the Christian right to make some incredible -- as in, not credible -- scientific claims in the past, almost too many to document. But here are five of the most ridiculous examples of biblically informed science.

1. Aliens would go straight to hell, if they existed

You probably saw this insane story for the first time earlier this week. According to Ken Ham, the creationist most famous for losing a debate against Bill Nye the Science Guy about evolution, the space program is a useless waste of money, informed as it is by nefarious secularists who want to use science to undermine religion.

Ham doubts that aliens exist, because they are not mentioned in the Bible, but goes on to say that even if they did exist, they would totally not be worth discovering, because they would not be direct descendants of Adam, and thus would go straight to hell. Ham believes that only hard-left secularists care about finding life on other planets, and that their motivation is to create an illusion that evolution is real and disprove the Biblical accounts of creation. As he puts it:

Secularists are desperate to find life in outer space, as they believe that would provide evidence that life can evolve in different locations and given the supposed right conditions!  The search for extraterrestrial life is really driven by man’s rebellion against God in a desperate attempt to supposedly prove evolution!

Of course, among the things scientists concern themselves with, Ham’s beliefs about the exploration of space probably fall pretty low on the list. But if Ham had his way, and NASA were defunded out of existence, this is just a few of the types of inventions we might be missing out on.

In what was called the “ABC Hypothesis,” a bogus claim based on zero scientific evidence, groups such as the Coalition on Abortion/Breast Cancer (ABC) have attempted for years create the impression that abortion and breast cancer are linked. Of course, the National Institute of Health (NIH) has long since debunked these claims. And so, in a 2003 press release, the Coalition insisted that there was a massive coverup to suppress evidence of such a link.

"Not one of the cancer groups had the political courage or the integrity to protect women's health by blowing the whistle on the misconduct of their benefactor, the U.S. National Cancer Institute (NCI), because they covet the government's funding," said ABC president Karen Malec.

When facts and evidence contradict your claim, you can always go the route of conspiracy theory.

In a highly controversial decision from the Supreme Court in the case of Hobby Lobby Stores v. Burell, the court ruled that an employer could deny birth control coverage to employees if that coverage interfered with the employer’s religious beliefs. Hobby Lobby claimed that being anti-abortion meant they could not provide certain types of birth control because they were abortifacients, meaning they don’t stop a pregnancy from happening, but actually terminate a pregnancy.

The claim is actually bogus, as no birth control method on the market today induces an abortion, not even Plan B (in which case, the egg is prevented from adhering to the uterine wall, falling short of the medical definition of pregnancy). The Supreme Court failed science and the American people that day by voting to side with religious belief instead of scientific facts and failing to uphold the constitution that provides the U.S. with the foundations for a secular society. Yet, the Christian right is claiming both a personal and moral victory, and celebrating the lives they have "saved" from these abortion methods, while ignoring the fact that none of these methods are even abortions.

4. "Climate change is false because the Bible tells us so"

A tried and true stamp of the political right -- climate-change denialism -- is also a well-established cause for hardline Christian fundamentalists, who cannot accept the claims of global warming because the Bible makes no mention of it.

In a radio interview with Voice of Christian Youth America’s radio program "Crosstalk with Vic Eliason," the host asked Republican Sen. James Inhofe about his new book, "The Greatest Hoax: How the Global Warming Conspiracy Threatens Your Future," in which the senator claims that Genesis refutes the claims of global warming.

Well actually the Genesis 8:22 that I use in there is that ‘as long as the earth remains there will be seed time and harvest, cold and heat, winter and summer, day and night,’ my point is, God’s still up there. The arrogance of people to think that we, human beings, would be able to change what He is doing in the climate is to me outrageous.

Never mind the overwhelming majority of climate scientists are in agreement about climate change.

Ken Ham also has an opinion on climate change, believing that it is just a natural occurrence that dates back to the time of Noah’s flood. What accounts then for the scientific consensus? Another secularist conspiracy!

Western governments have invested so much in the carbon dioxide theory that they probably won't change their minds any time soon. But Scripture tells us what really happened: We live on a young Earth that has undergone radical climate changes from the global flood.

Ham is not alone in citing Noah’s flood either. Congressman Joe Barton, R-Tex., has also argued this case — in front of Congress no less:

I would point out that if you’re a believer in in the Bible, one would have to say the Great Flood is an example of climate change and that certainly wasn’t because mankind had overdeveloped hydrocarbon energy.

5. My grandmother was no monkey!

This is the flagship of the Christian right's anti-science propaganda machine. Nothing upsets certain Christian fundamentalists more than knowing public school students are being told they share a common ancestor with apes.

After two rulings in 1987 and 2005 that removed the teaching of both creationism and intelligent design from the public school classroom this argument should be long dead. This has not stopped the Christian right from fighting tooth and nail to sneak religious teachings on the matter back into curricula. Attempting to pass laws that reintroduce creationism to classrooms via sneaky back doors, while lobbying textbook manufacturers to remove evolution from science textbooks, are the norm in the anti-evolution movement today.

The Christian right is also putting heavy pressure on politicians to speak out against evolution in public education, and with some success. House Science Committee Member, Paul Broun, -Ga., told a group at the Liberty Baptist Church Sportsman’s Banquet in 2012 of evolution:

All that stuff I was taught about evolution and embryology and the Big Bang Theory, all that is lies straight from the pit of Hell,” he continued, “and it’s lies to try to keep me and all the folks who were taught that from understanding that they need a savior.

And this man sits on a committee that makes science-related decisions for the country.

Science denial is the art of cherry -picking. If a scientific discovery works for their very narrow conception of religion, then science denialists still love it. One imagines, for example, that they get their flu vaccine every year. (A vaccine, funnily enough, made possible by our understanding of evolution.) They use the Internet, fly in planes and take advantage of the latest medical breakthroughs. These scientific advancements improve their lives, so they don’t question how it was discovered.

Yet, science denial stifles scientific progress, it hurts children’s education, it has a lasting impact on our ability to protect the environment and it is used a tool to control a women’s right to bodily autonomy. These types of arguments against science need to be removed from discussions on public policy as they deter us from the facts and pander to beliefs of a dwindling majority.