When it comes to gay characters, TV's not that much better than movies 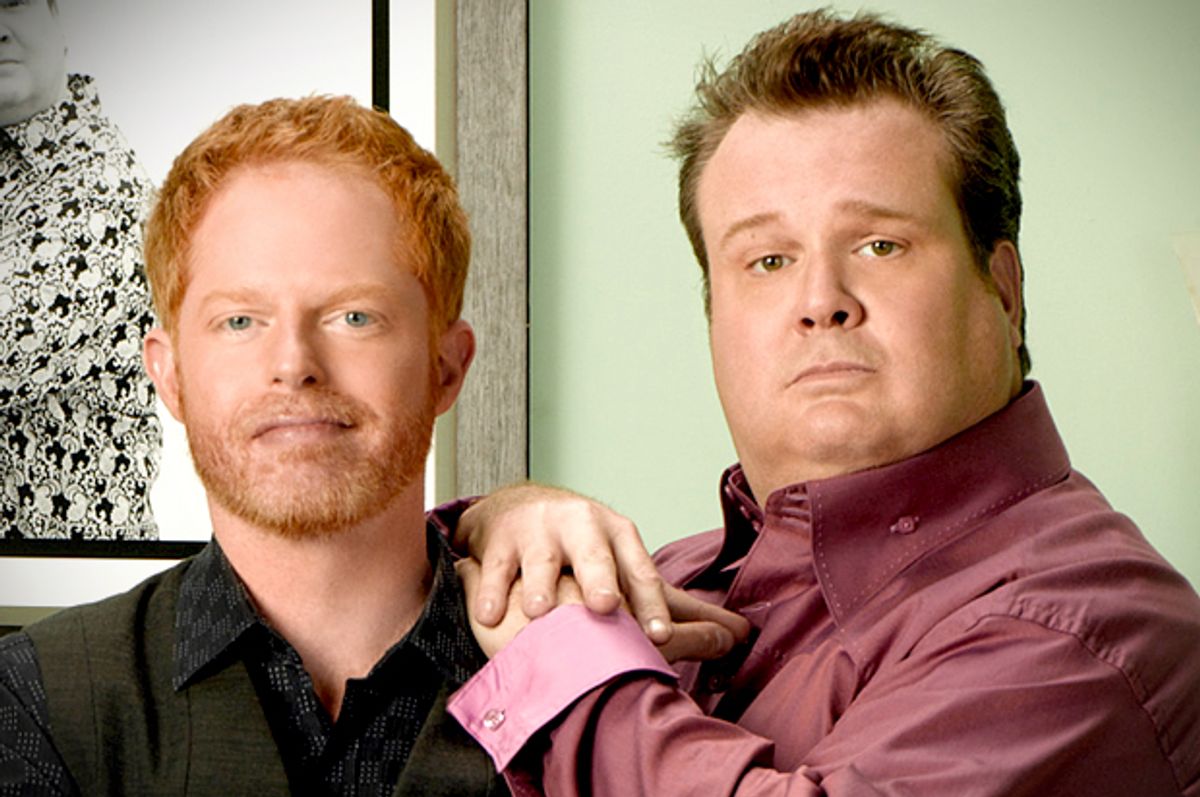 This morning, Vanity Fair ran through a new study put out by GLAAD that decries the lack of LGBT characters on movie screens; in the study's telling, only 17 studio films featured such characters last year. And calling the gay folks in some of those 17 movies "characters" is pretty generous -- one is the guy who gets dangled over the edge of a building, briefly, in "The Wolf of Wall Street," and another is real-life news anchor Thomas Roberts fleetingly appearing in "Iron Man 3."

Most of the characters, as Vanity Fair points out, exist only to fulfill plot points about homosexuality (either straight characters' tolerance or intolerance) and could be removed from the movie without any substantive change. But studies of this sort tend to be frustrating because of their narrow focus. The GLAAD report is not particularly prescriptive in any specific sense; though it tells filmmakers "Not only should there be a greater number of substantial L.G.B.T. roles, those characters should be more gender-balanced, racially diverse, and from many backgrounds," it doesn't actually provide a roadmap for getting there.

Nor, maybe, should it -- those counting up gay characters in the GLAAD offices are not themselves filmmakers. But while it's easy to look to TV, as Vanity Fair does, as a place where gay folks are treated better and given more robust personalities, the tube is not quite there yet.

For one thing, the GLAAD study looks only at major studio films and excludes independents. A similar consideration, then, would exclude the more prestige-y and less viewed projects like Showtime's "Masters of Sex" and Netflix's "Orange Is the New Black," both of which Vanity Fair cites as evidence that TV has outpaced movies when it comes to tolerance. Those projects have comparable creative freedom to the indie films GLAAD excludes -- and broadcast TV is a grimmer picture.

On ABC, there's "Scandal," which featured a semi-realistic depiction of a married gay couple who loved one another even as they plotted to destroy one another. Their homosexuality was less important than their love of power. But elsewhere on the network is "Modern Family," a show that still relies on hoary old clichés in its depiction of a gay married couple, and consistently treats those characters as vehicles to show how tolerant straight people are. CBS's "Survivor" manages to be diverse in all aspects of its casting but sexuality -- the show's biggest villain in recent years, the nasty and vituperative Colton, was one of the rare out gay castaways. Fox is, as usual, a standout, with the openly gay teens on "Glee" and the police chief on "Brooklyn Nine-Nine," but both shows are rightly treated as outliers even today (and both shows, as long as we're dealing with character size and impact, focus on the lives of straight folks). Shows like "The New Normal" and "Smash" were hardly great, but both shows were cancelled by NBC last year and neither has been replaced with a show that similarly foregrounds LGBT people.

It's easy to treat TV as a place that's inherently more sophisticated than film -- and, looking at the totality of the dial, it is in many ways. But comparing Hollywood's most mainstream output with stuff on premium cable isn't a fair fight. The stuff pitched at the broadest possible audiences is, on big screen and small, pretty tightly focused on straight people's stories. Maybe that's okay, too -- so long as interesting work gets to happen in the margins.