GOP's emptiest faux-outrage: Pretending to be aghast about fundraisers

Louie Gohmert and co. like to bash the president for fundraisers. Don't like it? Eliminate the need for fundraising 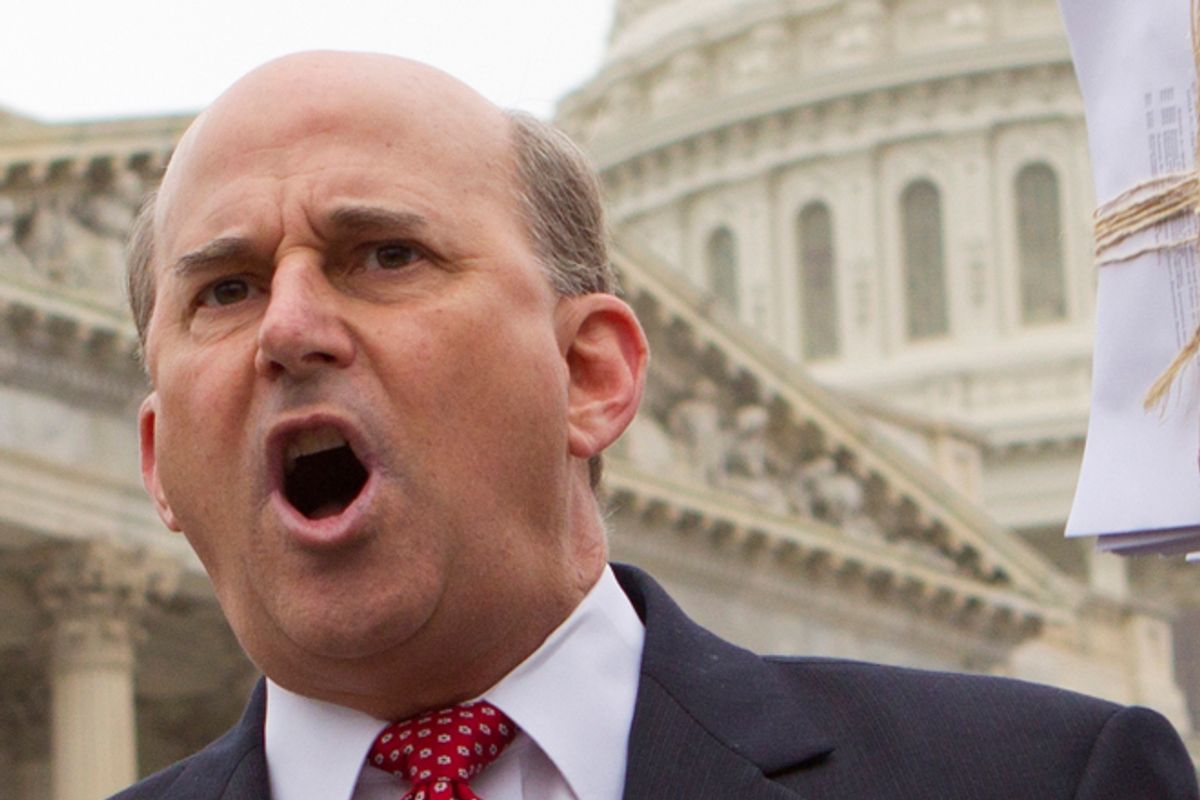 There may be no more simplistic, bad-faith and ubiquitous political attack than "While [X thing was happening somewhere in the world], my opponent was attending a fundraiser."

On any given day approximately 52 to 190 percent of campaign communications people will be trying to sell this line as an effective attack, implying that that the target is not serious about performing the duties of his or her job, because he or she is a monster, displaying a level of soulless depravity the likes of which we've rarely seen in this or any other epoch.

Let's scan the airwaves for a few current examples.

Rep. Bruce Braley, a Democrat who's challenging Republican Joni Ernst for Iowa's open Senate seat, is "under fire" for going to three fundraisers on a day in 2012 when he was supposed to be at a Veterans Affairs oversight hearing. What's especially comical about this attack, as Dave Weigel points out, is that Braley didn't skip the VA hearing in order to attend any of those fundraisers. The fundraisers were staggered around his schedule. Instead he skipped the VA hearing to attend another hearing about Operation Fast and Furious, then seen as a critical scandal among Republicans. Still, the implication's out there -- "Bruce Braley chooses fundraisers over his VA hearing," in the words of NRSC staffer Bill Murphy -- that Braley hates veterans and would much rather be at a fancy high-dollar fundraiser.

Next, let's examine a missive sent by Matt Canter, a staffer at the NRSC's Democratic counterpart, from Wednesday.

"Wha?" Matt Canter is shocked, shocked, that North Carolina Republican Senate candidate Thom Tillis would be attending a fancy Capitol Hill fundraiser while his state is trying to put together a budget. The tweet includes a clip, shot by Democratic super PAC American Bridge, of Tillis and an aide emerging from the Capitol Hill Club, GOP lawmakers' haunt near the Capitol. How can Tillis raise money for his campaign when he's also a sitting legislator? He must be the first person to have to find some way to balance these two roles!

There's something special about staffers for the Senate campaign committees, which exist to raise money for Senate campaigns, criticizing someone for going to a fundraiser.

But of course the major target for "he went to a fundraiser when [literally anything was happening in the world]" is the President of the United States, who is currently Barack Obama. This is because the President has a press pool following him at all times, recording each move. If there was a press pool following every member of Congress, we'd hear a lot more about how often every member of Congress spends hours, daily, raising money for themselves and the party.

Right now President Obama is on trip to the West Coast where he'll attend five fundraisers in three days. Meanwhile, a plane was recently shot down over eastern Ukraine, and the Israel Defense Forces is running a group operation in Gaza. Combine those things and you have a perfect lede for a pretend accountability journalism piece (including deep thoughts by Louie Gohmert): "President Obama began his three-day West Coast fundraising tour in Seattle with an admission that mushrooming global crises were adding anxiety to an American public already concerned about the economy." There's much to love in that sentence beyond the basic fundraising-during-crises clash. We also have a flourish in the form of "mushrooming," which invokes certain nuclear imagery. And then there's that bit at the end about how the economy, also, too, isn't in top shape.

We'd like to think everyone understands that Bruce Braley can still care about veterans' affairs even though he attends fundraisers, that Thom Tillis is still in the loop about how budget negotiations are proceeding while he makes a fundraising jaunt to DC, and that President Obama is just as able to respond as necessary to events in the Middle East and Ukraine while he's on a three-day trip that includes giving a handful of fundraising speeches. But since these While (S)he Was At A Fundraiser attacks are so common, campaigns must conclude that they have some traction.

And so to anyone who's so concerned about the ability of politicians to do their jobs while having to raise funds, you should come out in full support of public financing for campaigns, or some other measure that would reduce members' fundraising obligations. It's probably not well understood just how much time politicians spend on fundraising now, as more and more campaign finance restrictions are lifted and the demands of the arms race call for ever-increasing quotas. If it's gotten so bad that politicians are unable to perform their jobs because of fundraising obligations, call for the burden of such obligations to be lifted. Public financing wouldn't stop the whole campaign cash problem -- super PAC fundraising would still take up plenty of time, for example. But... it would solve a lot of the problem?

If you're going to complain about how someone attended or held fundraisers while they should have been doing something else, call for reducing the central role of fundraising to contemporary politics. Otherwise, spare the outrage. Stop it. Stop being so obviously fake, please, just as a general rule.