Hey, "women against feminism": Feminism still has your back so you're welcome

Lucky for you, the cultural and policy achievements of the movement don't only apply to members in the club 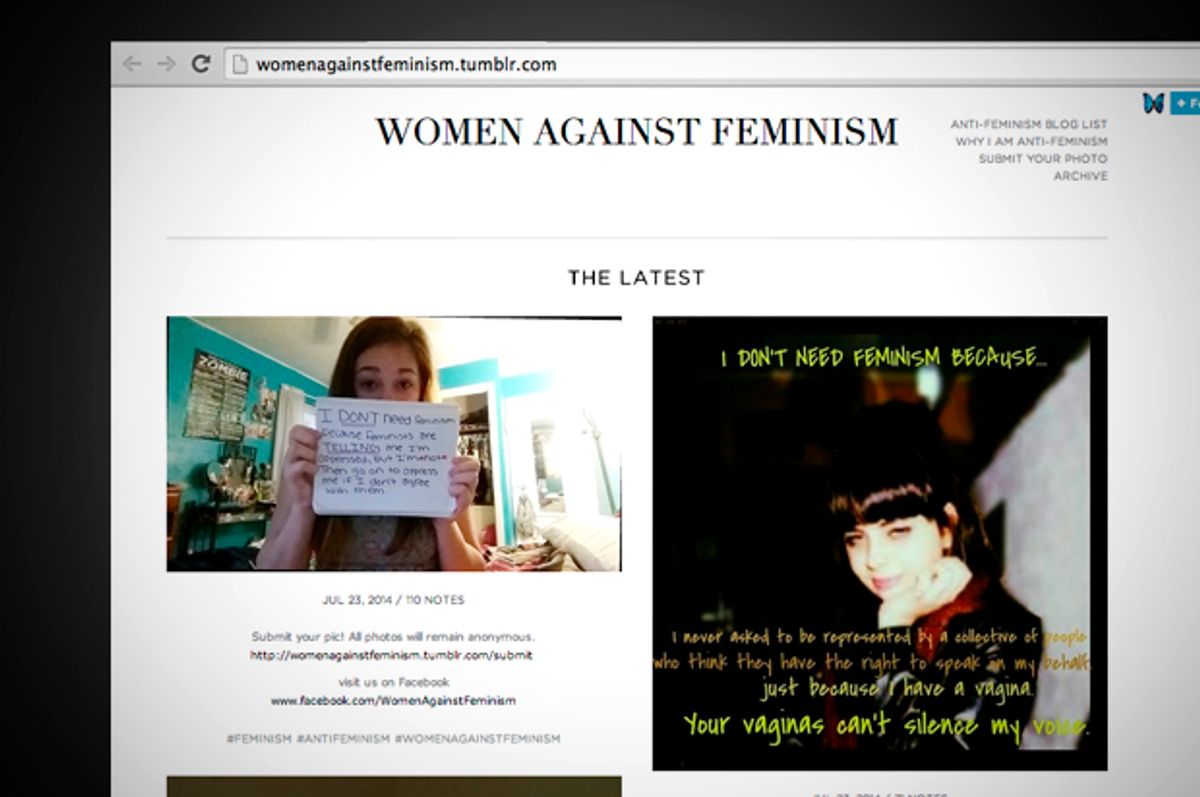 I am not really surprised by the Women Against Feminism thing because I already knew that some women think "the pay gap is a myth" and that feminism "demonizes traditional family constructs." Phyllis Schlafly is still yelling at clouds and Renee Ellmers is a real person in Congress right now, you know? So while I understand that the meme is having its moment, I'm also not sweating it very hard because it's not new.

But these women kind of do need feminism, at least judging by their signs.

Like this woman, who says she doesn't need feminism because she wants to be a mother who works in the home: Do you know what feminism has to say to that? (I am speaking on behalf of feminism here, which is kind of presumptuous but let's just go with it.) "Cool. We'll keep working to make sure that your husband is making a living wage to help support your family on one income, and that there is a system in place so you have health insurance for you and your children even if he loses his job. After all, financial instability can be a major source of stress for married couples, and that can hurt families. In the meantime, you keep being you."

Or this woman who wants to work hard and achieve things in life:

[caption id="attachment_13733092" align="aligncenter" width="500" caption="Here's feminism: "Cool. We'll fight to make sure that you are fairly compensated for your hard work, since you're probably making less than your male colleagues. And if you're already being fairly compensated, that's great! Maybe your boss is a feminist!"Or this woman who really loves her daughter:"] Feminism is all like: "Your daughter is really cute! You do your thing and we'll be over here pushing for affordable prenatal health services for everyone who needs them as well as family-friendly work policies that will help you (and your partner if you have a partner) spend more time with her."

And this woman who doesn't want her sex life to be a political agenda: That's not "fem-splaining," that's just how the movement works. Feminists work for change, everyone wins.