"I was illegally terminated": A working mom's Wal-Mart nightmare

An absurd policy allowed the mega-retailer to run roughshod over Tiffany Beroid. Here's how bad it really got 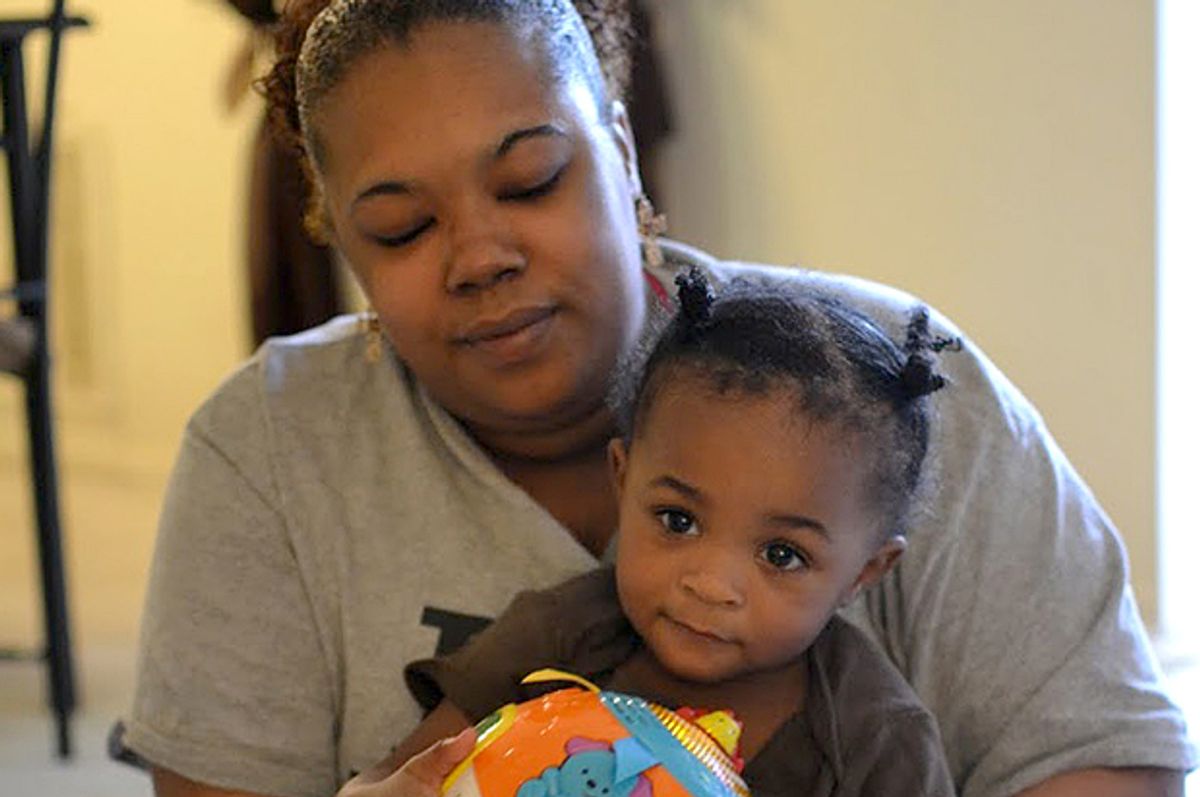 Politicians love to talk about working moms managing their busy lives, particularly when those working moms managing their busy lives decide to go back to school. Add in a pregnancy, and you basically have the ideal hypothetical woman, tailor made to be praised and lionized during some campaign speech from some candidate explaining just how focused they are on the needs of women.

But Tiffany Beroid isn't a political abstraction, she's a real person who wanted to finish her degree while managing the demands of work, family and a high-risk pregnancy. And despite a lot of lip service from lawmakers, policies that support working mothers are few and far between. Beroid was employed at a Wal-Mart in Laurel, Maryland for about three years when she decided to go back to school part-time. She said she tried to work out a schedule that could accommodate the demands of work, family and school, but the company responded by cutting her hours. In fact, her hours -- and income -- were cut so drastically that Beroid eventually had to drop out of school. When her high-risk pregnancy meant that she needed to be put on lighter work, she was placed on unpaid leave. When she raised these problems to Wal-Mart, she was fired.

"Wal-Mart fired me for speaking out,” Beroid said of the ordeal.

And this is where the policy vacuum comes in. She had no legal recourse, just like millions of working women in her exact situation have no legal recourse when they show up to work only to be told that their shift has been cut, their hours reduced or their weekday schedule has been changed to a weekend schedule. But a measure introduced by Democrats in the House and Senate this week is attempting to address at least one of the problems Beroid faced -- erratic scheduling that made planning to attend class, arranging for child-care and receiving a reliable paycheck nearly impossible. Put simply, the Schedules That Work Act would stop companies like Wal-Mart from retaliating against workers like Beroid for asking for scheduling accommodations, and make it easier for them to juggle work, school and family.

This is a huge issue for working families and working mothers in all industries. As recently noted by Jana Kasperkevic at the Guardian, data from ROC-United found that of the 200 mothers with young children they surveyed, 46 percent had an unpredictable work schedule, with nearly 40 percent reporting that their schedules changed on a weekly basis. These erratic schedules often result in a frantic scramble for child-care, made all the more challenging by unpredictable wages that come with your hours changing on a weekly basis.

Salon spoke with Beroid about her experience as a working mother at the "pro-family" company, Debra Harrell (the South Carolina mom arrested for letting her daughter play in the park while she was at work) and why policy -- rather than corporate self-correction -- is needed to bolster the wins organizers like her have been making with the retail giant.

What was your experience as a working mother with erratic scheduling?

Working with erratic scheduling was really rough, particularly when I became a student and requested a steady schedule. Wal-Mart did end up giving me a steady schedule, but they cut my hours. So even though I was full-time in their system, some weeks I would get 19 hours, some weeks I would get 35. It all depended on what they wanted to give me that week.

Right after that incident, I became pregnant. Wal-Mart had no sympathy toward my situation already with the scheduling change, and then they put me on unpaid leave, which made it even more of a struggle with my classes. Eventually, I had to drop out.

Was this your first pregnancy, or did you already have children while managing all of this?

My older daughter was 7 years old at the time.

The average wage at Wal-Mart is just above $8 an hour. Even if you have the time or advance scheduling notice to put child-care into place, was affordability an issue here?

It was a little rocky, especially with my first child, but after I had my second child it was definitely a struggle. I had to pull my children out of child-care, which meant that -- especially for the little one -- they weren't able to play with children in their own age group.

I'm reminded here of Debra Harrell in South Carolina, a mother who was jailed after allowing her daughter to play at a nearby park while she worked a shift at McDonald's. This is a situation -- no child-care, few options -- that a lot of working mothers find themselves in.

It was already a struggle where I was, but then when I was no longer able to afford child-care, I had to further limit my availability at Wal-Mart. It meant I could only work weekends, because I couldn't send my children to child-care Monday through Friday.

My husband ended up having to work double shifts to ensure we could make ends meet.

It's the managers who make those decisions. I think it was retaliation, because as long as I was able to work nights and then come back in the morning, I was able to get ample hours. But the minute that I set a steady schedule, they cut my hours. Because Wal-Mart isn't designed to work around scheduling needs; they can always find someone to just work weekends or only work during the day.

So they retaliated whenever I limited by schedule by cutting my hours.

What do you make of these policies from a company that claims to be pro-family?

Their public image is that they are a family-oriented company and that they work with every individual to accommodate his needs; however, it isn't a fact.

Recently, we made a change where we had access to a full 40 hours, which eventually went national. But even though it's a national policy, Wal-Mart doesn't notify employees that it exists.

Their image, publicly, they'll say they are a family-oriented company. But when it really comes down to it, they're not. Because they don't enforce their own policies for parents or associates working there.

Business groups have criticized this measure as a lot of bureaucracy, and would prefer to let Wal-Mart self-regulate. You've had some major victories with getting policy change enacted at the company, but the implementation has been uneven. Do you see a limit to letting Wal-Mart self-correct?

I think it's a way to show the public that they're listening, but they're not actually enforcing the changes. It's really more up to the associates to notify other associates about the policy change and enforce them.

Do you think your termination from Wal-Mart was also related to your work as an organizer?

I was illegally terminated due to speaking out in my activism and making sure that workers knew of these policies and the policy changes.

What was the explanation they gave you when they fired you?

They said it was about attendance. They looked at very old attendance [records] from years ago and held them against me.

And I'm guessing that your attendance was also related to your high-risk pregnancy and your part-time schedule at school, which Wal-Mart ostensibly should have made accommodations for.

The days that I was out as a result of being in school or with my children were overlooked and weren't accommodated.

This policy could go a long way toward helping working parents -- particularly working mothers -- balance their jobs, educations and families. But it also stands very little chance of passing the Republican-controlled House. What do you think the disconnect is?

I feel like they should help us better enforce the policy changes we already have, and to help us make change as well.

It affects our communities as well as our children. When we're able to have a steady work schedule and the 40 hours, we can put them in child-care and have them among their peers, so we know where they are and don't find ourselves going to jail [like Debra Harrell] while trying to provide for them.