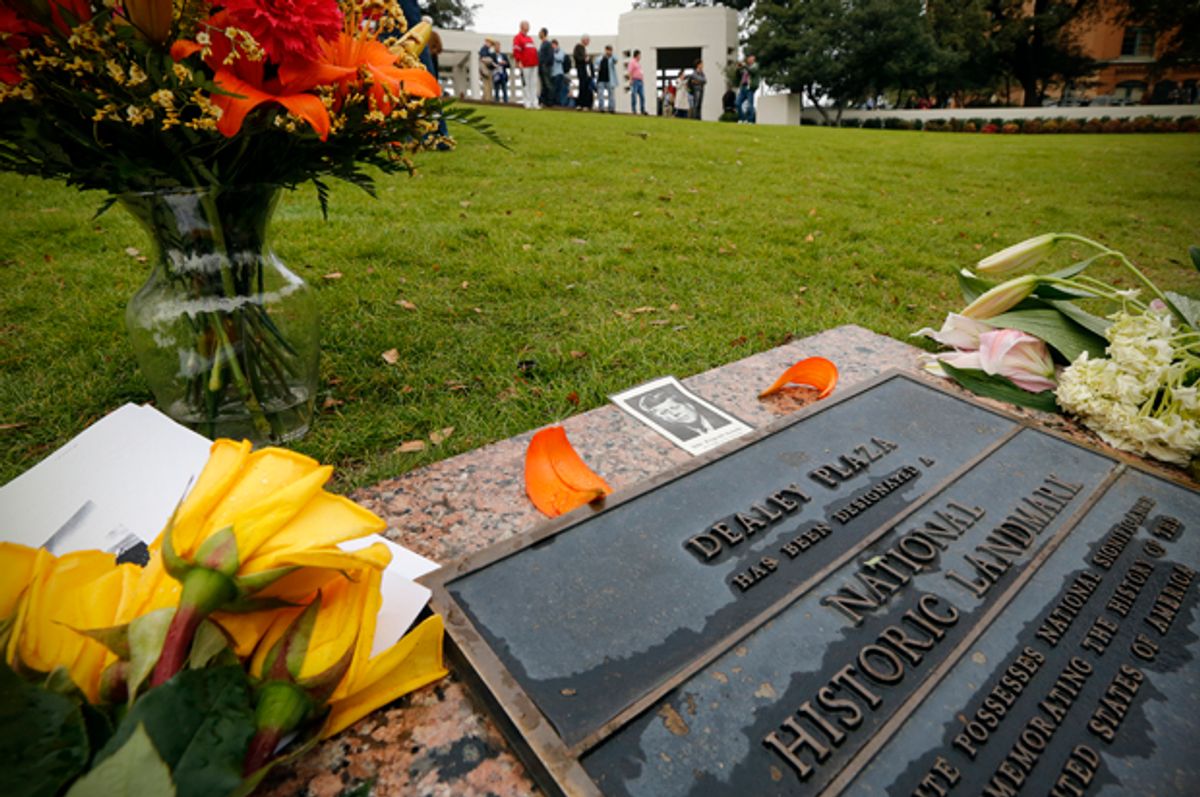 Dallas's Dealey Plaza, near the spot of the 1963 assassination of John F. Kennedy. (Reuters/Jim Bourg)
--

Three weeks before the assassination of John F. Kennedy, a concerned citizen from Dallas named Mrs. Nelle M. Doyle wrote a letter to White House press secretary Pierre Salinger. She was worried about the president's visit. This is what she wrote:

Although I do not consider myself an 'alarmist', I do fervently hope that President kennedy can be dissuaded from appearing in the city of Dallas, Texas as much as I would enjoy hearing and seeing him.

This 'hoodlum mob' in Dallas is frenzied and infuriated that their attack on Ambassador Adlai Stephenson on the 24th, backfired on them. I have heard that some of them have said they "have just started."

No number of policemen, plainclothes men or militia can control the "air" Mr Salinger --- it is a dreadful thought but all remember the fate of President McKinley.

These people are crazy, or crazed, and I'm sure that we must realize that their actions in the future are unpredictable.

Unfortunately, her prediction wasn't alarmist enough as it turned out.

The right-wing hatred for John F. Kennedy was in some ways as extreme as the hatred for Barack Obama and nowhere was it more energized than Dallas in 1963. Three years earlier, right-wingers in the city had signaled their anti-Kennedy zeal by turning on its native son, Lyndon Johnson, after he accepted the nomination for vice president. He and his wife, Lady Bird, were accosted by a shrieking mob of conservative women in front of their hotel armed with signs saying he'd sold out to "Yankee Socialists." It was downhill from there. Over the next three years the simmer burst into a full boil as various luminaries of the John Birch Society such as millionaire oil man H.L. Hunt and the anti-communist fanatic Gen. Edwin Walker, a zealot so far to the right that he even believed Eisenhower was a communist, fanned the flames of anti-Kennedy hatred.

Walker was at the center of the plot against Adlai Stephenson to which Mrs. Doyle referred in her letter. He had exhorted his followers (some of whom belonged to group that unironically called itself the "National Indignation Convention") to confront the U.N. ambassador when he came to town and they did, hitting him with signs and spitting in his face before he could be rescued by the police. At the scene he famously asked, “Are these human beings or are these animals?”

It's estimated about 5,000 of these fliers were distributed all over downtown Dallas in the days leading up to the presidential visit.

The morning of Nov. 22, the Dallas Morning News featured a full-page ad "welcoming" the president to Dallas.  After a preamble in which they proclaimed their fealty to the Constitution and defiantly asserted their right to be conservative, they demanded to be allowed to "address their grievances."  They posed a long series of "when did you stop beating your wife" questions asking why Kennedy was helping the Communist cause around the world.  Here's an example:

WHY has Gus Hall, head of the U.S. Communist Party praised almost every one of your policies and announced that the party will endorse and support your re-election in 1964?

WHY have you banned the showing at U.S. military bases of the film "Operation Abolition"--the movie by the House Committee on Un-American Activities exposing Communism in America?

WHY have you ordered or permitted your brother Bobby, the Attorney General, to go soft on Communists, fellow-travelers, and ultra-leftists in America, while permitting him to persecute loyal Americans who criticize you, your administration, and your leadership?

WHY has the Foreign Policy of the United States degenerated to the point that the C.I.A. is arranging coups and having staunch Anti-Communists Allies of the U.S. bloodily exterminated.

WHY have you scrapped the Monroe Doctrine in favor of the "Spirit of Moscow"?

MR. KENNEDY, as citizens of the United States of America, we DEMAND answers to these questions, and we want them NOW.

You get the drift. And you probably recognize the tone. The subject may have changed somewhat but the arrogant attitude combined with the aggrieved victimization is a hallmark of right-wing politics even today.

As we all know, later that day the president was gunned down in Dealey Plaza. The entire world was shocked and traumatized by that event and the course of history was changed.

So why bring this up today? That was a long time ago and we've moved on from those days, right?  The John Birch Society is a relic of another time.  Anti-communism is still a rallying cry on the right, but without the Soviet threat, it's lost much of its power.

Unfortunately, the venom, the incoherent conspiracy-mongering, the visceral loathing still exist.  In fact, in one of the most obliviously obtuse acts of sacrilege imaginable, Dealey Plaza is now the regular site of open-carry demonstrations.  That's right, a group of looney gun proliferation activists meet regularly on the site of one of the most notorious acts of gun violence in the nation's history to spout right-wing conspiracy theories about the president while ostentatiously waving around deadly weapons.

Travelers from other nations who come to Dealey Plaza to pay their respects are undoubtedly startled to see yahoos carrying guns and passing out extremist literature very much like the literature that was distributed in Dallas in the fall of 1963. In most places in this world such contempt for national hallowed ground would be frowned upon by decent people.  But in America, armed men and women marching around spouting hatred for the president at the very spot where a former president was assassinated is business as usual. We are "free" here to carry guns in public and dare others to argue with us. But that doesn't make it any less vulgar and profane to do it in a place of national grief -- and what should be a monument to right-wing ignominy.

On the 50th anniversary of the assassination, historian Darwin Payne, who was a journalist in Dallas in 1963, said, “You could feel it in the air. When I hear some people express hatred for Obama, it feels the same. But I never have felt we are on the verge of anything like the events I witnessed back then.” Let's hope he's right. There are a whole lot of people with a political ax to grind who are wandering around our streets armed to the teeth. As Mrs. Doyle said in her letter, "These people are crazy, or crazed, and I'm sure that we must realize that their actions in the future are unpredictable."

Here's the video of the Dealey Plaza open carry event.