The right's anti-healthcare jubilee! Why they can't quit the Obamacare obsession

Conservatives' gloating over Halbig reveals why the right's insular, fact-resistant world is so dangerous 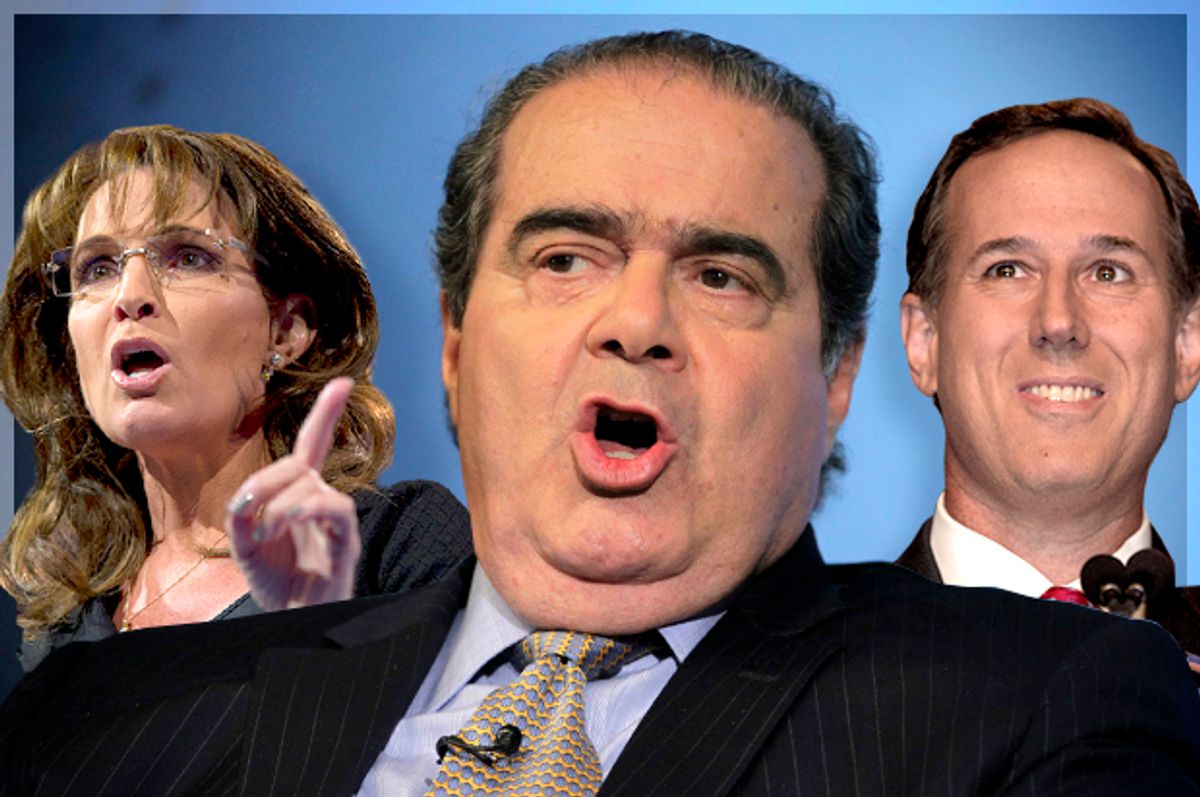 Tuesday’s Halbig ruling, in which a three-judge panel of the D.C. Circuit Court employed suspect legal reasoning to invalidate some of the Affordable Care Act’s health care subsidies, hasn’t had a tangible impact on health care policy. The subsidies are still going out to people who need them, and the White House has said it will petition for a review before the full D.C. Circuit Court, which observers tend to believe will shake out in the administration’s favor. So for all the apocalyptic and over-the-top rhetoric hinting at Obamacare’s coming demise, the law is no less whole than it was last week.

But Republicans and conservatives are no less jubilant, and they’ve spent much of the past few days popping corks and telling anyone who will listen that Halbig is the magic bullet that will finally, after years of frustration, kill Obamacare once and for all. “ObamaCare in death spiral after federal appeals court strikes down some subsidies,” blared a Fox News Op-Ed by longtime ACA fabulist Betsy McCaughey.

The unseemly side to all this celebrating is the fact that these conservatives are, in effect, throwing a party over a judicial ruling that would strip millions of people of their health coverage. “The next time Republicans are wondering why so many people think their party is cruel and uncaring and will gladly crush the lives of ordinary people if it means gaining some momentary partisan advantage, they might think back to this case,” wrote Paul Waldman in the American Prospect.

Conservatives, obviously, wouldn’t see it that way, even though the policy ramifications are clear. In that way, Halbig has offered a stark reminder of just how vast the differences between the two sides in the Obamacare fight are. It’s not just a simple matter of policy disagreement – conservatives and Republicans have constructed a separate and impenetrable reality in which the Affordable Care Act is a catastrophic failure that has not provided a single measurable benefit.

That’s not an exaggeration, if recent polling is to be believed. CNN conducted a survey recently asking respondents if they believe that families other than their own are better off now that the ACA is largely in place, or if they think the “legislation has not helped anyone in the country.” According to the partisan breakdown, 72 percent – nearly 3 in 4 – of self-identified Republican respondents believe that the ACA has helped precisely no one.

There is not a mote of factual evidence one can bring to bear in defense of that belief, and yet it’s where a supermajority of Republicans land when asked about the Affordable Care Act. The only way to explain such widespread and entrenched misinformation is the closed loop of conservative media, which uniformly and consistently portrays the Affordable Care Act as a “disaster,” or a “fiasco,” or a threat to liberty, or pernicious socialism, or an active threat to your health and perhaps your life.

Viewed from that perspective, and safely insulated from any countervailing factual information, you start to understand how one could cheer on Halbig’s promise of depriving people of their newly obtained Obamacare benefits. If you believe the law is a dangerous failure that hasn’t done any good at all, then seeing it abruptly dismantled is a good thing.

Within that conservative bubble, the Halbig case is not the long-shot stab at legal sabotage that pretty much everyone else thinks it is. To conservatives, it’s an open-and-shut case that will, in the end, result in Obamacare’s demise. Charles Krauthammer wrote in June that the case will make it to the Supreme Court, and “it is hard to see how the court could do anything other than overturn the federal-exchange subsidies.” Vox’s Matt Yglesias pointed out that the Halbig coverage at National Review was “extensive” and “unanimous” in promoting the notion that the case was rock-solid on the merits. Writers at other, non-conservative publications have been picking apart the many logical and legal errors that form the heart of the case, but none of that will penetrate the conservative bubble.

It’s tempting to merely write this off as another case of epistemic closure, but there is some danger here. I wrote last month that the success of Halbig “ultimately rests on the willingness of one or more conservative judges to put ideology ahead of sound legal reasoning — something that very well could happen for the simple reason that it happens all the time.” It happened with two judges on the D.C. Circuit Court, and there’s every chance it could happen again.

At least four Supreme Court justices are part-time or full-time inhabitants of the alternate conservative reality, and they have demonstrated a hostility toward Obamacare and a willingness to bend their own legal reasoning in the service of tearing the law down.

It’s still unlikely that Halbig would be upheld by the Supreme Court, but if the conservatives on the court were to pull it off, the decision would throw millions of Americans’ personal lives into disorder and create chaos in 36 states. And the right would be okay with that, so long as Obamacare gets hurt.