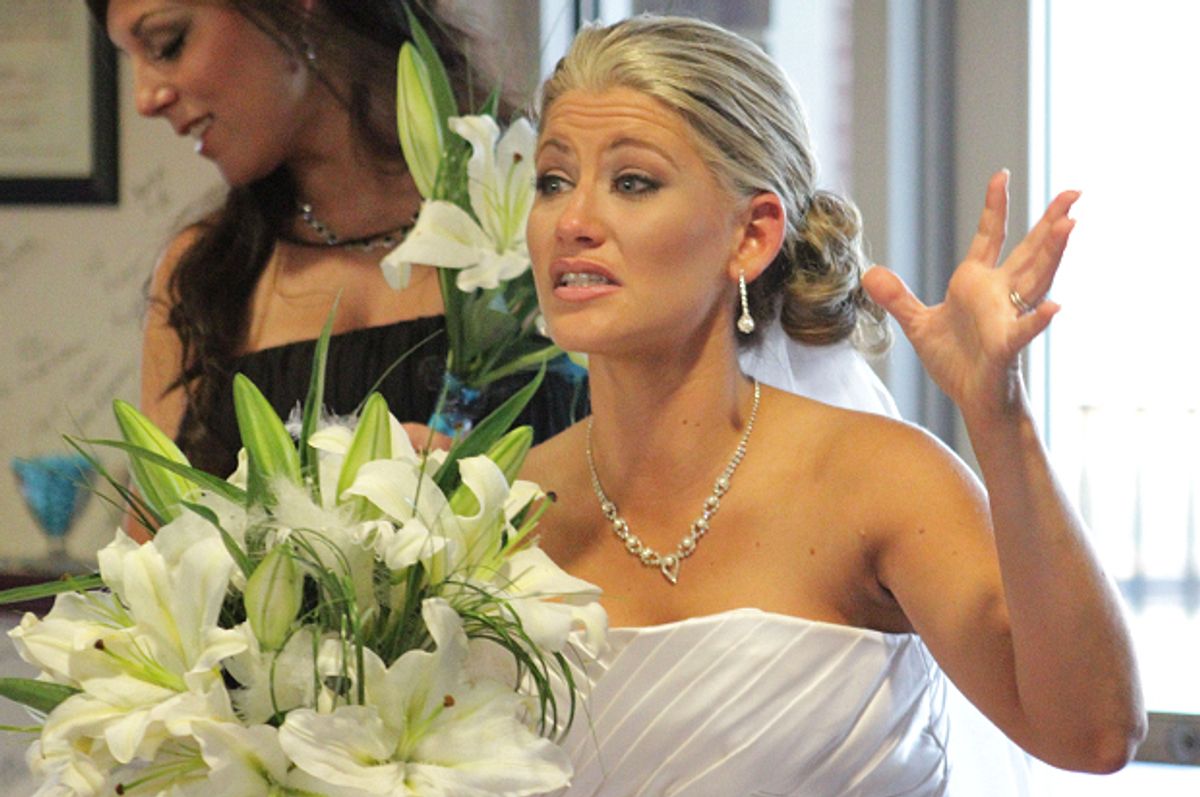 The wedding-industrial complex is a seductive, sinister one.  All the pins, bridal websites, sunlit blogs; it’s a rabbit hole of cultural, social and economic pressure. So it's little surprise that it’s found a home in reality TV. The wedding complex’s double-edged sword of anxiety-based marketing and aspirational pressure to spend is evident nowhere more than in this genre of programming wherein bridezillas take center stage. Values align perfectly, as women are the audience, targets and victims of two institutions that specialize in exploiting and vilifying them: the wedding-industrial complex and reality TV.

WE tv’s “My Fair Wedding” advances infantilizing, cotton-candy fantasies of princess perfection while TLC’s “Four Weddings” and WE tv’s “Rich Bride, Poor Bride” paint women as materialistic and childish. “Bridezillas,” also on WE tv, evokes nasty classist tropes and TLC’s “My Big Fat American Gypsy Wedding” gapes at another culture’s rituals, leaving us as pitying spectator to women portrayed as passive and ignorant at best, inbred subhumans at worst. Reality TV’s bread and butter is in pathologizing women, and wedding programs have a corsage-encrusted hand in it.

We know there’s money in marrying. Bridal juggernaut the Knot, to which eight of 10 U.S. brides are registered, reported 2013’s average wedding cost as $29,858 (excluding honeymoons, which 99 percent of couples take). It's most expensive to wed in Manhattan at an average of $86,916, but budget brides could opt for a Rocky Mountain affair, as Idaho came in last at $16,159. It’s not just the one day anymore; the entire weekend’s getting pricier. Last year, rehearsal dinners cost $1,184 and morning-after brunches $457. Wedding dresses came in around $1,281 (though tuxedos only $248). That's intense information for brides-to-be; however, publishing average numbers instead of median engenders unrealistic thinking about budgets and higher industry pricing. Less tangible pressure than the fiscal is that pursuit of photogenic, do-it-yourself authenticity. Inspiration comes from blogs, magazines, Etsy and Pinterest, of which more than 90 percent of activity is created by women and where one can find tens of thousands of wedding boards and more than 700 boards with the word “bride” in the title.

But the wedding industrial complex encourages women to consume while also punishing them for it. Buy Pninas, panicky cleanses and rustic wheelbarrows full of typewriters for the reception -- but don’t be vain, materialistic or crazy about it, ladies! Thus, all pleasures become guilty, and disparaging narratives about women become normalized. Maddie Eisenhart, media analyst and managing editor of A Practical Wedding, believes the wedding industrial complex  “trades in regret” as “weddings are one space women can own, where we’re given a lot of power and where our voice matters. But then we’re told there’s major, real-world consequences for, say, buying the wrong flowers.” The Bridezilla who told her bridesmaids that “if money is tight and you cant [sic] afford to contribute ... or won’t be able to afford a dress, etc. then [I] don't have time to deal with that, I'm sorry” went viral; USA Today covered the South Carolinian who stabbed her fiancé, supposedly over wedding colors, on Christmas. We laugh at a woman murderously attached to the Pantone wheel, but cartoonish tropes about brides pervade our culture.

And reality TV (a major guilty pleasure; women account for the majority of reality viewership) exaggerates these narratives even more. “Rather than use it to apply pressure, they employ it to generate spectacle and invite the masses to revel in that spectacle along with them, generating income via gawking eyes on the screen,” says wedding planner Laura Guerrie, who herself has been courted for a wedding show.

Having edited dozens of different reality programs, Christina M. is straightforward about wedding shows’ manipulation and use of nasty archetypes. If the network wants “any type of discontent within the bridal party,” a reality staff has a range of tactics to deliver drama including goading bad-mouthers and bringing up painful memories to elicit tears. “Sometimes, we even get the cast to play along and flat-out act these scenes for us.” After meetings with a network for a potential show about unconventional couples, Guerrie said of the outline she was given: “Naughty little buzz words like ‘weird,’ ‘crazy,’ ‘strange’ and ‘bad-taste’ peppered the paragraphs ... they assured me it was an early draft, that each episode would have a ‘happy ending.’” she writes. “But as I read further, the general gist unfolded like an acid-trip vision — bringing to mind images of ... animal cars full of rabid brides in tattered day-glo dresses.” Seeing those red flags, she tweaked the treatment and made it clear the show couldn’t denigrate her couples. Then, “my phone got very quiet.”

TLC boasts a stable of highly rated bridal programming, with Fridays rechristened “BrideDay.”  Bridetestants on “Four Weddings,” TLC’s answer to "Mad Max Beyond Thunderdome," could make a reception tent from the shade being thrown.  It quantifies romance, not only by displaying each woman’s budget, but by assigning points for venue, food, dress and experience. In determining the “best” wedding, points are docked for infractions like too-chunky potatoes, a too-sunny sun and overly ceremonial ceremonies. The editing is tough to watch, as the frenemies advance on the camera arm-in-arm. One might marvel at “how beautiful everything looks!” before a cut to her confessional: “She shoved some fake orchids into a vase. And put them in the center of the table.” Whether smirking at DIY efforts or diminishing vows, it’s a win for tired cultural narratives; sisters until the losers can push the winner into the fountain come scoring time, all for a free honeymoon.

CMT’s short-lived “My Big Redneck Wedding” relished regional stereotypes and pink bridal shotguns. And casting guidelines? One participant says that a verifiable redneck “don’t take no shit from nobody, especially his future wife.” These programs reinforce classist messaging about the kind of women who “deserve” perfect weddings. It’s especially evident in the laughingstocks of “Bridezillas,” WE tv’s cheap-looking homage to back-fat meltdowns and catfights underscored by cartoon music. It’s also, tellingly, one of the only programs to regularly feature women of color, furthering negative racial stereotyping.

An overrepresentation of outlandish budgets, badly behaved women and silent Ken doll grooms create a lousy perceived reality. Sure, City Hall weddings and mature, capable women don’t get enough play in media, but defamatory gender narratives are damaging beyond the bridal blogs. “Bridezillas” is cut from the same ideological cloth as “Teen Mom” and true crime programming like “Wives With Knives.”  On WE tv’s “Marriage Bootcamp,” wherein “couples are faced with the ultimate question: How do you stay married to a bridezilla?,” the misogyny is palpable as a man chokes with rage to his stunned wife, “You. Made. Me. Hate. Women.” That moment, shaded with scarily real violence under the guise of cheeky escapism, speaks volumes.