When you're a heroic avenger trying to slay criminals, sometimes the only sidekick you can count on is four-legged 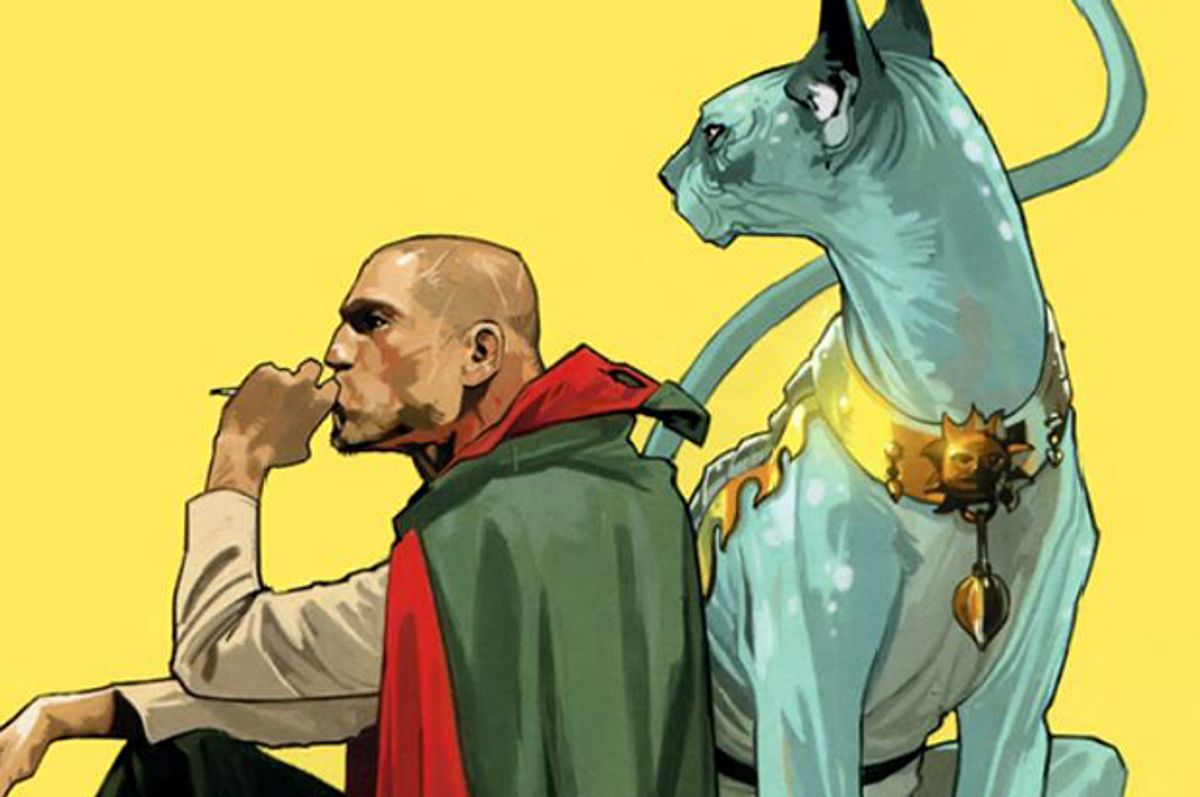 Comics have long been a home for animals, whether you’re a fan of Carl Barks’ classic Scrooge McDuck or the last canine survivor of Krypton, Krypto the Super-Dog. Marvel has been home to many animals over the years: Falcon’s partner Redwing, Kitty Pride’s dragon Lockheed, Lockjaw of the Inhumans, not to mention gun-toting Rocket Raccoon, who’s part of “The Guardians of the Galaxy.” Still, the glory days of superhero animals were probably the ’50s and ’60s at DC. That’s when Ace the Bat-Hound fought crime beside Batman, and the Legion of Super-Pets were an actual team, composed of similar beasts such as Streaky the Super-Cat and Beppo the Super-Monkey.

Comic books were sillier back in the Silver Age, but the appeal of comic book animals hasn’t diminished, even when comic books are generally more serious fare. These days, you can find critters aplenty at nearly every comics company, and they aren’t just pets: they’re partners, swashbuckling rogues, and — in one case — a cyborg chicken.

As in real life, comic book animals offer great comfort. Whether you’re an average person trying to get through the day or a grim avenger trying to wipe out every criminal scumbag in the world, sometimes the only one you can count on is your dog, cat or coyote.

In real life, Laika, a Russian dog, was the first animal in space. In Jonathan Hickman and Nick Pitarra’s “The Manhattan Projects,” she’s also a talking dog who, unlike her real-life namesake, is a willing participant in sci-fi shenanigans. This enormously inventive series gives real history many demented twists, as the scientists open portals to alternate universes, commit alien genocide, build a robo-FDR and deal with the fact that Robert Oppenheimer was replaced by his twin brother, the cannibal Joseph. Amidst the cannibalism and genocide, Laika has added a sweet element to the series.

Introduced back in “Hawkeye” #1, this pooch, formerly named Arrow, officially named Lucky, has been a recurring character and the focus of what might be the best issue of any comic book in donkey’s years: the already legendary “Hawkeye” #11, which is told entirely from the point of view of Pizza Dog. David Aja’s remarkable art, which is very reminiscent of Chris Ware, functions as a map of Pizza Dog’s smell-coded canine brain. I felt like I knew my own dog better after reading this issue: it’s that great. The continuing adventures of Pizza Dog can be found every other month in “Hawkeye,” where female archer (and series co-lead) Kate Bishop absconded with Lucky to California.

Though absent so far from the current arc of “Saga,” Lying Cat has been a powerful presence throughout this wonderful series. As her name implies, Lying Cat is a human — er, feline — lie detector, who is capable of saying only one word: “Lying.” Lying Cat is the sidekick, not pet, of The Will, a bounty hunter who undergoes a Han Solo-like transition from murderous rogue to still-murderous-but-also-pretty-honorable rogue. Like Wonder Woman’s truth-demanding lasso, Lying Cat is there to call other characters on their bullshit. The awesomeness of Lying Cat shouldn’t be a surprise. Writer Brian K. Vaughan is also the author of “Y: The Last Man,” which gave us a comic book pet hall-of-famer: Ampersand the Capuchin monkey.

Valiant's “Quantum and Woody” features estranged brothers brought back together to investigate their father’s death, use their new superpowers and team up with a goat that has laser-beam eyes: Vincent Van Goat. Everything about this series is humorous, and their goat sidekick — who, bizarrely, is pretty much the brains of the team — adds to the overall absurd flavor. I’d love to see a Valiant/Marvel crossover between Vincent and Thor’s goats, Toothgnasher and Toothgrinder.

Avatar Press’ “Rover Red Charlie” features three dogs trying to navigate an apocalyptic world after a plague has wiped out humanity. Michael DiPascale’s art is a mix of adorable and horrifying, and the story is likewise touching and disturbing. That’s no surprise, since Garth Ennis is a comics legend who has penned some of the greatest runs in comics history, including his creator-owned series “Preacher” and his work on “The Punisher” for Marvel. For a different (and even more heart-rending) twist on a trio of animals in a tough spot, check out Grant Morrison and Frank Quitely’s “We3.”

Though not new, these two pets — the dogs of Jughead Jones and Archie Andrews, respectively — have taken on new and heartbreaking prominence in "Afterlife with Archie," a very strong series that shows what happens when the zombie apocalypse dawns in Riverdale. Without spoiling anything, I’ll just say these two dogs have crucial rules to play in the first arc. The person-pooch bond adds considerably to the overall drama.

I’m cheating by including Poyo in this article — he is the furthest thing from a pet imaginable — so sue me. Poyo is a character in John Layman and Rob Guillory’s “Chew,” and he is one of the most ridiculous and terrifying characters in comics: a government-sanctioned cyborg chicken super-soldier. In a world where eating chicken has been outlawed due to a bird-flu outbreak, this live chicken is far more dangerous than even the KFC Double Down. Do not mess with Poyo, but do get the upcoming  one-shot “Warrior Chicken Poyo.”

Before Batman’s son Damian Wayne died, (don’t worry, he seems due for a resurrection soon) he assembled a trio of pets that added an adorable element to Grant Morrison’s sprawling, mythic run on various Batman titles. Alfred is a stray cat named, of course, for Alfred Pennyworth. Bat-Cow is a genetically modified bovine with markings that look preposterously like a Bat-mask. Titus, meanwhile, is the successor to Ace the Bat-hound, much as Damian is the successor to previous Robins Dick Grayson, Jason Todd, Tim Drake and Stephanie Brown. While Damian is “dead,” Titus has stuck around, recently accompanying Batman on a search for his son’s body and adding a distinctly Scooby-Doo element to what would otherwise be a morbid quest.

The Punisher is a tough character to get right if you’re not Garth Ennis or Jason Aaron, but Nathan Edmondson and Mitch Gerads’ new series has done a nice job with Frank Castle, moving his location and temperament to the West Coast. (Don’t worry: the Punisher hasn’t started sipping chai lattes while asking lowlife scum about their childhoods during Pilates. He’s still a single-minded serial killer — the Dexter of Marvel.) But this version of the Punisher is more sociable than usual, having breakfast at the real-life Nickel Diner and even semi-adopting a coyote named Loot (short for Lieutenant). I wouldn’t call the Punisher a responsible pet parent, but he does look out for his new pal. If even a murdering wacko like the Punisher can find comfort in a pet, maybe there’s hope for us all.