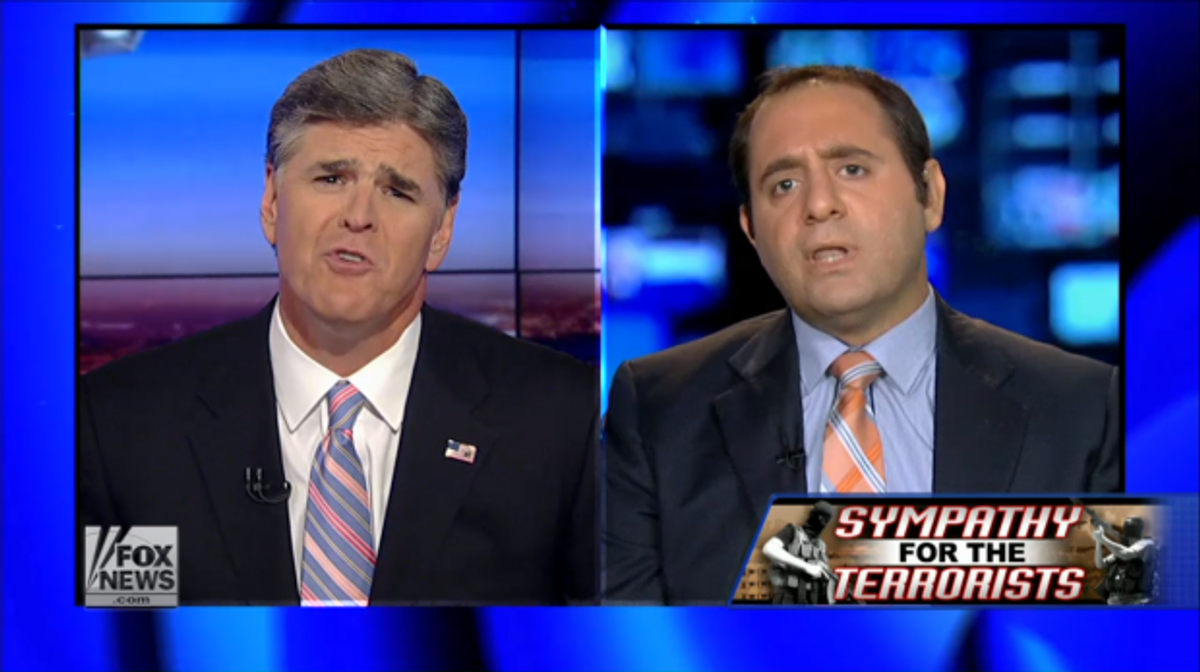 Taking a break from his program's usual steady diet of smart takes from Ann Coulter and Sarah Palin, Cliven Bundy super-fan Sean Hannity had Yousef Munayyer, the Palestinian-American executive director of the Jerusalem Fund, as a guest on his Thursday night show.

Munayyer, who is frequently invited on other cable network shows to provide the Palestinian perspective, likely thought his appearance would involve a discussion of the ongoing fighting in Gaza; but it turned out that Hannity had other plans.

After struggling slightly to pronounce Munayyer's name during his introduction, Hannity immediately started berating Munayyer, asking him, "What are you going to do!?" after presenting a hypothetical in which Munayyer himself is receiving rocket fire from a hostile force.

When Munayyer tried to answer by noting that the roots of the Israeli-Palestinian conflict go back decades, Hannity repeatedly cut him off, repeating, "What are you going to do!?" He then interrupted Munayyer some more by claiming he was "making a rationalization" for Hamas' aggression.

Inevitably, the segment devolved into a McCarthyite farce, in which Hannity started yelling that Munayyer must give a yes or no answer to the question of whether Hamas is a terrorist organization. Munayyer's attempts to have a rational discussion that did not require him to bend the knee and prove his decency to Hannity by calling Hamas terroristic were not successful.

"What part of this can't you get through your thick head!?" Hannity eventually bellowed. Munnayer responded by looking exhausted, and probably wondered to himself why he agreed to appear on Fox News to begin with.

You can watch the part where Cliven Bundy's biggest supporter, Sean Hannity, yells at his guest for refusing to adequately distance himself from people who use threats of violence to intimidate a lawful and legitimate government entity below: