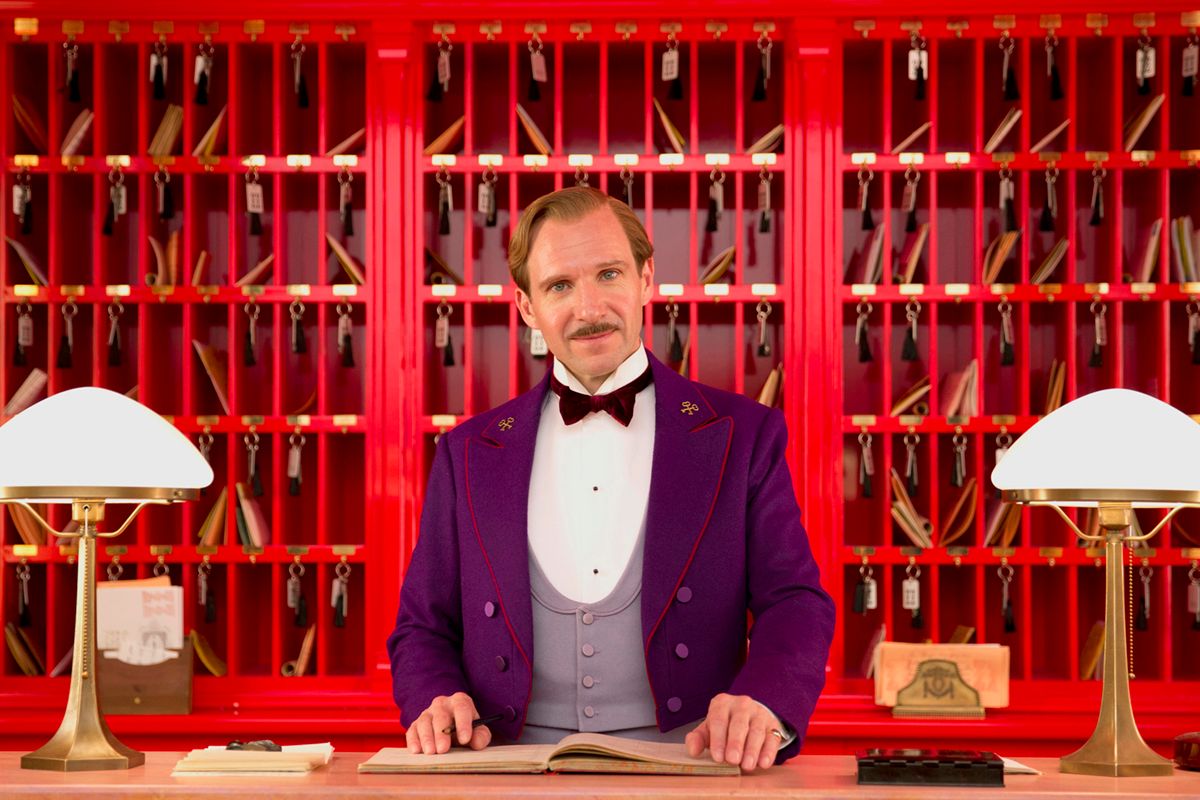 GOERLITZ, Germany — Standing on a ladder, workman Roland Freund dips his trowel into a bucket of mortar and carefully smoothes a wall under a molding. The work is painstaking and the air choked with dust, but he’s happy to be here.

That’s because he’s taking part in a project locals hope will herald the revival of their town in the former East Germany, which industrial decline and an exodus of people has left depopulated and depressed since German reunification in 1990.

Expectations are high because this is no ordinary construction project.

Recently made famous as the setting for Wes Anderson's film “The Grand Budapest Hotel,” the Goerlitz department store is a majestic, airy structure with a beautiful leaded glass dome over the atrium, striking brass chandeliers and a grand staircase leading to the balconied terraces of the upper floors. When it opened in 1913, the Art Nouveau establishment rivaled London's Selfridges and Berlin's Kaufhaus Des Westens (KaDeWe).

Recently facing a battle for survival, however, the store is now in the midst of a $30-million facelift financed by entrepreneur Winfried Stoecker, the founder of a multimillion-dollar medical technology company based in nearby Luebeck.

He wants to leverage Goerlitz's growing reputation as a movie-shooting location to help rejuvenate the town, which is among the poorest in Germany.

“This is crucial for the revitalization of the downtown. But it is also a beacon of hope for the entire city of Goerlitz,” says Rainer Mueller, chairman of an earlier citizens' initiative to attract a buyer for the site. “With the planned for October 2015 re-opening of the store, the dead heart of the city will begin to beat again.”

After escaping World War II unscathed, the Goerlitz department store had been closed for years when Anderson chose it for “The Grand Budapest Hotel.”

Even though Goerlitz had managed to attract a steady flow of film crews from Hollywood and Germany's Babelsberg over the years, featuring in “The Reader,” “The Book Thief,” and “Inglourious Basterds,” among other films, the town itself was slowly dying.

Like others in former East Germany, it lost many of its young people to the more vibrant West in the years following the fall of the Berlin Wall in 1989. Although Siemens and the Canadian aircraft manufacturer Bombardier still operate facilities here, unemployment ranges around 12 percent.

The elderly outnumber the young and the town ranks dead last among German cities in purchasing power, according to a recent study by Germany's Association for Consumer Research.

Many are optimistic the renovation will change that, says Corinna Schneider, the area manager for the German Parfumerie Thiemann, the last company to operate a boutique in the department store.

“Many people came to Goerlitz especially to see the Kaufhaus,” she said, seated at a nearby cafe. “They all said they'd be back when it opens.”

Still, it's hard to make the potential foot traffic numbers add up for retailers, even though locals like Mueller say the time of outward migration is over and tourism figures are up, thanks to the so-called Goerliwood phenomenon.

On a sunny summer day at least, tables are packed at the swish outdoor restaurants near the Hotel Boerse, where Anderson and actors Jude Law and Ralph Fiennes stayed during the filming of “Grand Budapest.”

“Everyone says this is a pensioners' town, but suddenly stores and kindergartens are opening, so something is definitely happening,” says Stefanie Eggers, spokeswoman for the renovation project who notes that 4,000 people turned up for the project's recent open house.

Across the Neisse River from Poland, Goerlitz's local boutiques are already attracting Czech and Polish shoppers, whose purchasing power and thirst for Western products is growing faster than their hometowns can satisfy. Moreover, the picturesque town lies directly on the route from Poland to the larger city of Dresden, the current shopping Mecca for wealthy Poles.

“On the motorway, the first exit across the German border from Poland is Goerlitz,” Friedel says. “We'd like to make sure the Polish people take that exit and don't go to Dresden.”

The key to success, however, will be turning the Kaufhaus into a “destination store” that customers are willing to make the centerpiece of a day trip. In the US, that has mostly worked for megamalls or specialty stores such as Cabela's outfitters, which incorporates attractions like a simulated trout stream where anglers can test-drive fly rods.

Friedel says Garhammer — a 65,000-square-foot, family-owned fashion boutique located 60 miles from Munich — proves that the right package of top products and personalized service can work in Germany, too.

Gourmet restaurants, espresso and Prosecco bars and other signature features are planned for every floor, and the team has sketched out ideas for festivals and events to recapture the sense of the department store as a center of sophistication and culture — as dramatized in the popular ITV series “Mr. Selfridge.”

Still, it’s a battle to get potential vendors to come look at the place, Friedel says. But if he can get them into town, he adds, most of them bite.

“Once they see the building and the town,” he says, “they can imagine how nice it will be.”