The right's pathetically low curve: How it got a pass on race and poverty

Paul Ryan, Rand Paul and the Koch brothers get hailed for baby steps in reversing the GOP’s racial and class bias 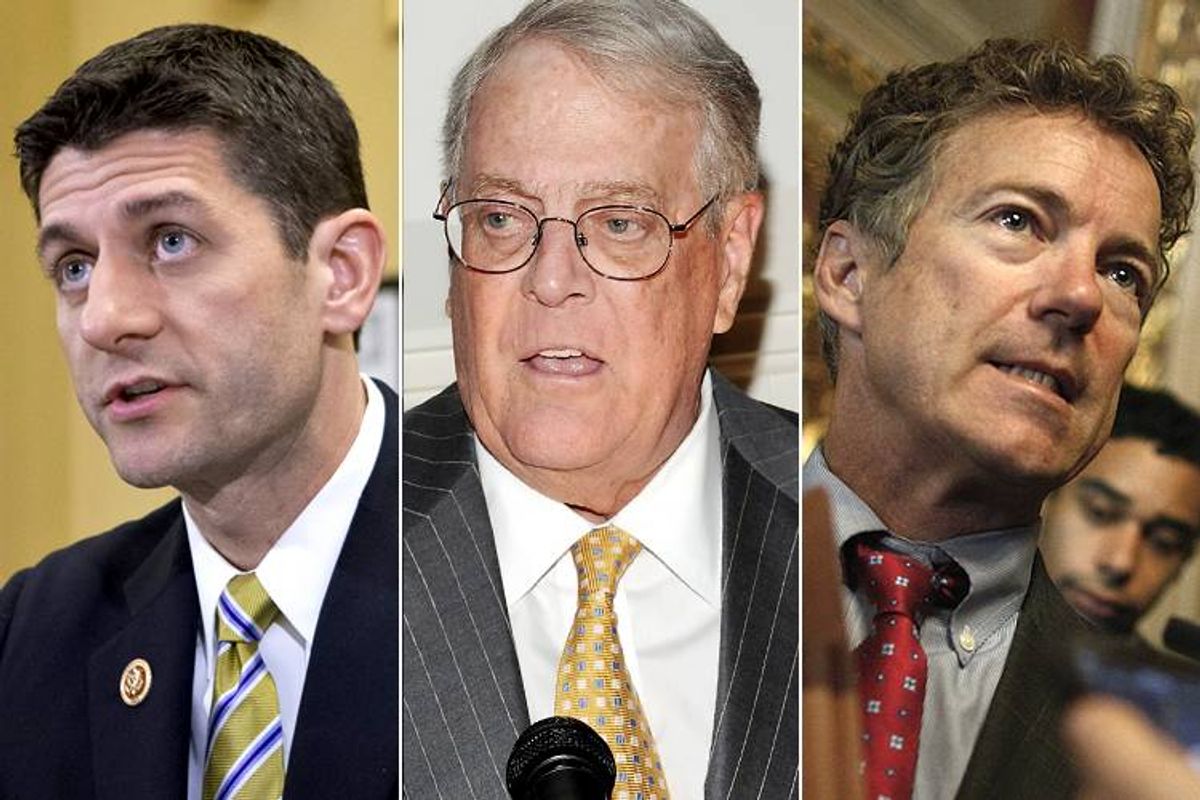 And each winds up hailed, even by some liberals, as taking a big step for the Republican Party when it comes to questions of race and poverty. Why do people settle for so little when it comes to the right trying to signal a change in its damaging approach to both?

Ryan’s one good idea is expanding the earned income tax credit, originally a Republican policy that Republicans turned against because Democrats embraced it too. The EITC is one big reason for the “47 percent” of people who pay no taxes that Ryan’s running mate railed against. Now Ryan says he wants to expand it, and some other programs – which doesn’t square with his infamous budget proposals of recent years.

So MSNBC’s Chuck Todd politely asked Ryan to reconcile his poverty plan with his budget plan – which cuts $5 trillion over 10 years, and takes 69 percent of the cuts from low- and moderate-income families – and he couldn’t do it.

“Does this mean you would change your budget proposal to reflect your new poverty plan?” Todd asked.

“No,” Ryan answered. “I didn’t want to get into a debate over the funding levels of the status quo. I want to talk about how to reform the status quo.”

Todd tried again. “So we should ignore your budget proposal for these programs?”

“No, Chuck, what I’m trying to tell you is, let’s not focus on dollars and cents for these programs,” Ryan replied, a little peevishly. “Let’s focus on reforming these programs so they work more effectively.”

Paul Ryan: a profile in equivocation.

Then there’s Rand Paul, continuing his “outreach” to African-Americans with his visit to the Urban League annual convention. Paul actually deserves credit for trying to tackle issues of criminal justice reform with Sen. Cory Booker. But in his Friday speech he also seemed to decry voter suppression laws, insisting his goal is to “help more people vote,” in the words of the Louisville Courier-Journal.

"We have to be together to defend the rights of all minorities," Paul said.

But Paul flip-flops on this issue every chance he gets. "I don't think there is objective evidence that we're precluding African-Americans from voting any longer,” he said last year, after the Supreme Court curtailed the Voting Rights Act. But a few months later, he seemed to have second thoughts.

“Everybody’s gone completely crazy on this voter-ID thing,” Paul the New York Times. “I think it’s wrong for Republicans to go too crazy on this issue because it’s offending people.”

That was big news. But then, confronted by his friends at Fox, he lurched into reverse. Paul assured Sean Hannity he was fully on board with the Republican voter ID strategy. “No, I agree there’s nothing wrong with it. To see Eric Holder you’ve got to show your driver’s license to get in the building. So I don’t really object to having some rules for how we vote. I show my driver’s license every time I vote in Kentucky … and I don’t feel like it is a great burden. So it’s funny that it got reported that way.”

"It's funny it got reported that way," when that's what Paul said. Maybe that’s where Paul Ryan learned how to equivocate.

Then there are the Koch brothers. I said everything I needed to in this story. I’m sympathetic to the UNCF wanting more scholarship funding. But “Koch scholars”? A no-strings gift would be one thing, but scholarships Koch foundation appointees help award, based on a student’s affinity for "entrepreneurship" and the free market is something else entirely.

Liberals who applaud UNCF taking the money, and decry AFSCME’s parting ways with the group, insist it’s possible to separate the principle of education for black children from the Kochs’ funding of efforts to break unions in the public sector – which disproportionately employ their parents – and suppress their voting rights.

But it’s true that all of these moves are preferable to outright race baiting and demonizing black people and the poor, so liberals give them extra credit. Applauding minimal GOP gestures toward decency reflects the soft bigotry of low expectations once again.