From "Saw" to "Cabin Fever," the scariest — and most fascinating — ethical quandaries of the horror genre 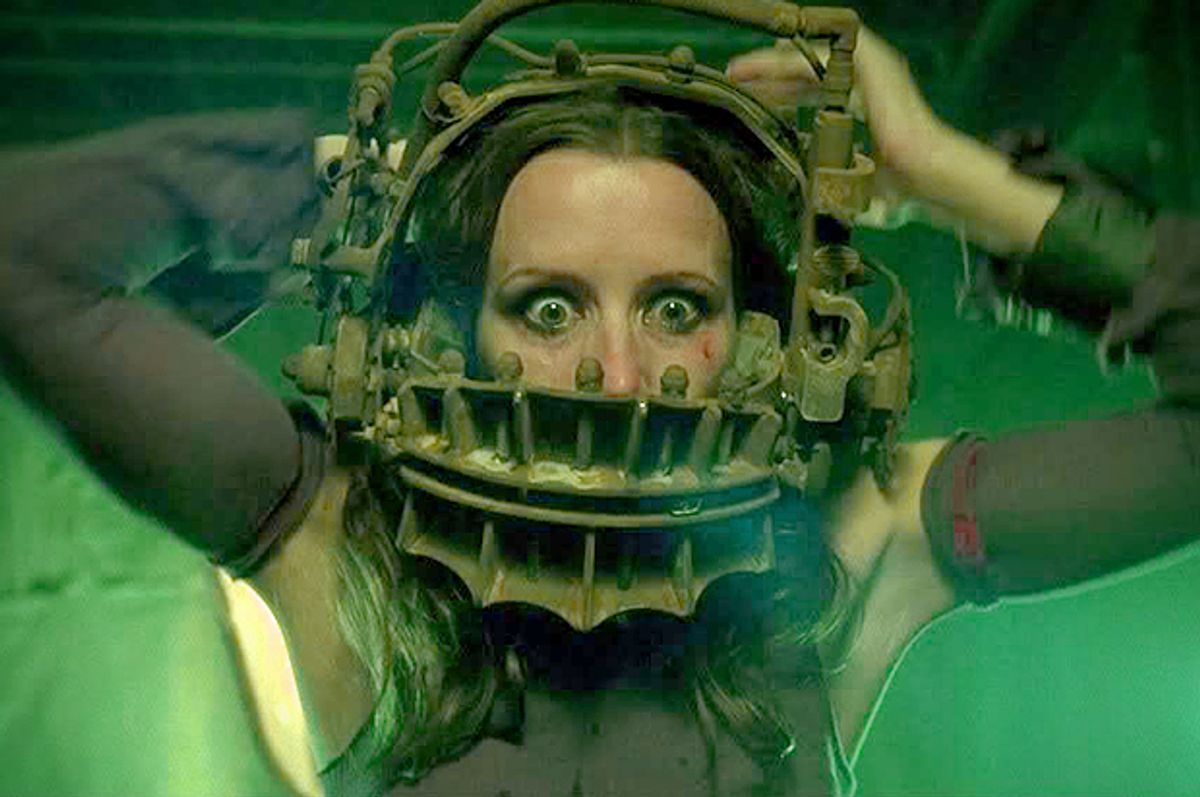 I can’t help but put myself in the characters’ situations: How would I react? Who and what would I prioritize? And would I, under intense pressure, make the best decision?

I find an uneasy pleasure in watching characters onscreen make bad decisions — when they think they are doing the right thing, but it turns out otherwise. So here of the most terrifyingly compelling ethical dilemmas in this sadistic cinematic genre:

"Saw" (2004) Its two main characters, Dr. Lawrence Gordon (Cary Elwes), and Adam (co-writer Leigh Whannell) are forced to consider the true meaning and value of life when they are imprisoned in a room with a body lying in a pool of blood between them. As the film reveals (in flashback) how they came to be in this predicament, it eventually shows us what fates they will each suffer. The movie's poster memorably and bluntly asks: “How much blood will you shed to stay alive?” The film also prompts various characters to contemplate unpleasant tasks that range from murdering a mother and her child, to crawling through razor wire and finding a key to disable a device that will otherwise destroy the victim’s jaw. Each test of will/nerve (and stomach) is designed (or jerry-rigged) to lay bare the fears and insecurities of the characters. Watching the would-be victims come to acknowledge, if not fully understand, what "bad behavior" caused them to be chained up -- with the only option to saw off a limb to escape -- is gratifying because the punishment somehow fits their ostensible crime.

"Irreversible" (2002) While torture porn purists may scoff at the inclusion of Gaspar Noé’s infamous revenge thriller, it is a singular achievement. In the dizzying, virtuoso opening sequence, Pierre (Albert Dupontel) violently bludgeons a man to death with a fire extinguisher in a gay S&M club called Rectum. Pierre believes the victim raped his friend Marcus’ (Vincent Cassel) wife Alex (Monica Bellucci). Yes, the killing is brutal, but it is not nearly as horrific as the film’s extended, unflinching rape sequence. Noé audaciously unfolds this spellbinding tale backwards, which not only involves the viewer in justifying/condoning this act of revenge, but also emphasizes the cruel irony of the murder, and its twisted ethical implications.

"Evil Dead" (2013) The original is untouchable, but this effective remake excels because it sets up its heroine, Mia (Jane Levy) as a drug addict hoping to quit cold-turkey. Viewers want her to survive and recover, but things become, er, complicated after Eric (Lou Taylor Pucci) reads the “Book of the Dead” despite warnings not to open it. Eric unleashes the Evil Dead, a supernatural force with a nasty wrath. Fede Alvarez’s graphic, gore-filled shocker is a terrific allegory for addiction, depicting the hell and healing process that is recovery. What is our responsibility to addicts? This rhetorical question, combined with the morality of interventions, and the perils and repercussions of addiction, makes "Evil Dead" a tense and traumatic analogy for how people on drugs become “possessed,” and end up doing harm to themselves and others. It’s easy to root for the characters’ unlikely survival, even as tongues, arms, thighs and other body parts are sliced off.

"No One Lives" (2012) is a deliciously nasty thriller in which a gang kidnaps passing travelers Driver (Luke Evans) and Betty (Laura Ramsey), hoping for a payday. What the gang gets, however, is payback. No one realizes that Driver is a sadistic serial killer hell-bent on revenge, and as promised by the movie's title, no one lives. The sticky wicket here is that Driver has a kidnap victim in the trunk of his car, and even though he’s the film’s hero, he’s entirely amoral. "No One Lives" offers a murky morality tale colored by buckets of blood as Driver exacts his gory hardcore brand of justice, gleefully and unapologetically, dismembering, disemboweling and dispatching his victims in creative ways that reverse everyone’s fortune -- well, except his. Viewers have the unenviable task of rooting for the serial killer, which, for most folks, is clearly a moral quandary.

"Wolf Creek" (2005) This “based on a true story” torture porn flick features a cold-hearted, xenophobic villain. It falls under the “innocent victim” category, as its casualties are vulnerable backpackers — not unlike the victims in the better known but less impressive "Hostel" (2006). This creates a ethical dilemma for the trio of leads: Brits Liz (Cassandra Magrath) and Kristy (Kestie Morassi) and Aussie Ben (Nathan Phillips), who do nothing more wrong than get stranded in the outback and ask for help. Do they deserve to be drugged, trapped and tortured? Mick Taylor (John Jarratt), the initially ingratiating but utterly despicable sadist, thinks so. "Wolf Creek" effectively creates a palpable sense of dread as the characters are bound and gagged or dismembered and try to escape. As each tries to survive, can they save the others? Will they experience survivor’s guilt? Can they kill Mick? "Wolf Creek" featured a head on a stick, and an open ending, which led to "Wolf Creek 2," released earlier this year. The sequel offers more of the same, but it’s actually a much worse film. Learn from the first one, and don’t take the second trip.

"Hard Candy" (2005) A squirm-inducing, darkly comic thriller that has Jeff (Patrick Wilson) flirting seductively with Hayley (Ellen Page in her star-making performance) on the Internet. When they meet in person, she agrees to go back to his house, only to turn the tables on him. She drugs him, ties him to a chair and threatens him with castration (a procedure he can even watch on a nearby monitor!) Hayley believes Jeff to be a pedophile as well as a rapist and murderer, and as such, she is exacting a vigilante’s revenge, even if her methods seem to be extreme. What transpires, however, is a clever if morally bankrupt game between Jeff and Hayley. Hayley has a much more nefarious fate than castration in mind for Jeff. How and if he survives the various levels of torture, which grow increasingly more severe, is what makes "Hard Candy" illicit fun. Well, for everyone but Jeff.

"Cabin Fever" (2002) Eli Roth built his reputation on this horror-comedy, which operates as an AIDS or Ebola parable as a flesh-eating virus infects the characters — college graduates who have, among other offenses, accidentally killed a man asking for help. That the disease-carrying corpse ends up in the reservoir adds an environmental ethical quandary to the proceedings. Do the twenty-somethings deserve bloodletting punishment? In this universe: Of course they do! And Roth doles it out in Grand Guignol style as characters are bitten by children, their skin falls off and/or is eaten by dogs and they are sprayed with copious amounts of blood, much of it dangerous, and none of it decent.