When the far right scapegoats immigrants, it makes inequality worse -- by empowering the real villains. Here's how 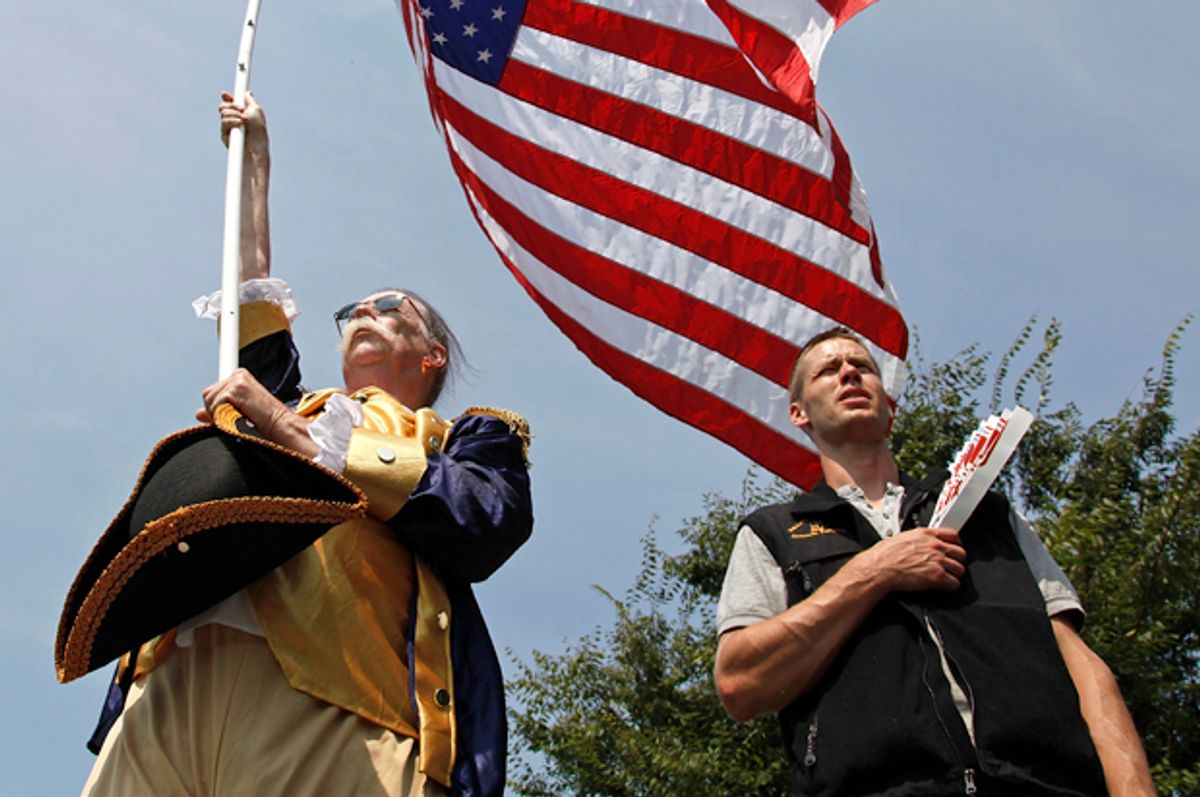 When it comes to hating immigrants, the Tea Party has nothing on Samuel Gompers.

Gompers, the founder of what became today’s AFL-CIO, was so appalled by the immigrants pouring into the United States in the late 19th century, and so convinced that they were undermining wages for his union members, that he penned an anti-Asian pamphlet entitled "Meat vs. Rice: American Manhood Against Coolieism: Which Shall Survive?"

“Caucasians are not going to let their standard of living be destroyed by Negroes, Chinamen, Japs or any others,” Gompers fulminated on another occasion, expanding his race-baiting from Asians to black people.

Gompers and the Tea Party have this in common: Both rose to prominence during times of tremendous economic inequality in America. Gompers was the most significant labor leader of the Gilded Age. The Tea Party is a nativist, populist reaction to our modern Age of Inequality. And both blamed immigrants for the nation’s distress.

The Gilded Age and today’s Great Divergence occurred when the nation’s foreign-born population was at historic highs. By contrast, America’s wealth has never been shared more broadly than it was in the late 1960s, at the end of a four-decade ban on immigrants. There is evidence that mass immigration lowers wages and widens the gap between the wealthy and the middle class. But don’t blame the immigrants. Blame the companies that exploit them as a source of cheap labor, and the laws that allow them to do so. In fact, scapegoating immigrants makes inequality worse, because it creates an opportunity for corporations and politicians to drive a wedge between native-born workers and those from foreign lands, to the disadvantage of both.

Consider what happened after the Civil War, when refugees from the peasant kingdoms of Italy, Austria-Hungary and Russia began thronging the United States. Uneducated and accustomed to subservience, they were ideally suited for exploitation by the titans of the era. Andrew Carnegie (an immigrant himself, but from Scotland) used Hungarians and Slavs to break a strike by native-born coal miners in 1884. When the Hungarians and Slavs went on strike a few years later, he imported Italians. There were always newcomers willing to work for less. Steel mill foremen deliberately organized polyglot work gangs -- a Pole, an Italian, a Bohemian, a Serb -- so they couldn’t talk about how much they hated the pay and the working conditions.

But that wasn’t the only reason unions couldn’t gain traction in the Gilded Age. Instead of inviting immigrants into the labor movement, native-born unionists treated them as job-stealing rivals. The Amalgamated Association, which mounted a failed 1892 strike at Carnegie’s Homestead Works, refused to admit black people or those from foreign countries. Its resentment had roots in economic reality: In their book, "Migration and the International Labor Market, 1850-1939," T.J. Hatton and Jeffrey G. Williamson estimated that without the wave of Southern and Eastern European immigration that began in 1870, “the real wage would have been about 9 percent higher.”

Not surprisingly, Gompers and other labor leaders supported the Johnson-Reed Act of 1924, an anti-immigrant law inspired by the same nativist backlash that had brought about Prohibition. Through a system of quotas restricting the number of visas for each country to 2 percent of the nationality living in the U.S. in 1890, the act essentially cut off immigration for the next 40 years. While Great Britain (from which Gompers himself had emigrated) was entitled to 34,000 visas a year, as a reflection of America’s British stock, Italy was limited to 3,800. Chinese and Japanese were banned entirely.

In the first decade of the 20th century, 8.2 million immigrants arrived in the United States. From the 1930s through the 1960s, only 7.2 million came here. During those decades, 6 million black people moved north to fill jobs that would otherwise have gone to Europeans. (The Great Migration of African-Americans was a direct result of the Johnson-Reed Act. Factory owners had always preferred hiring Europeans to black people, because Europeans didn’t speak English and could be deported if they agitated for higher wages. Suddenly, black people were getting the dirty coal-shoveling work that had once to gone to Poles right off the boat from Danzig.) The only accommodation for unskilled foreign workers was the bracero program, which allowed Western ranchers to import seasonal Mexican pickers -- who provided no competition in the industrial marketplace.

By 1970, foreign-born Americans made up 4.7 percent of the population, an all-time low. Their total number was 9.7 million, the fewest since 1890. Most were elderly Europeans, retired from the workforce.

It’s no coincidence that America’s economic inequality also reached its all-time low around that time. Economist Stanley Lebergott concluded that cutting off immigration had resulted in higher wages, especially for low-skill workers. Advances in productivity could not account for all the wage gains since the 1920s, Lebergott wrote in his 1964 book "Manpower and Economic Growth: The American Record Since 1800." “Instead we find that halting the flow of millions of migrants… offers a much more reasonable explanation.”

The year after Lebergott published his book, President Lyndon Johnson signed the Immigration and Nationality Act, eliminating the quota system. The bill was sponsored by Rep. Emanuel Celler of New York, who had voted against the Johnson-Reed Act and devoted his career to overturning it. Rev. Wayne Poucher, a conservative commentator of the day, opposed the Act on both racial and economic grounds: “In effect, this would change the entire ethnic makeup of America, permitting mass immigration to the United States from Africa and Oriental countries,” Poucher wrote, adding “the rank and file of organized labor certainly do not favor opening the doors of America to further competition for their jobs.”

Passed just as the U.S. was about to lose its industrial hegemony, the Immigration and Nationality Act turned out to be a double whammy for the middle class. Mass immigration, as it has traditionally been practiced in the United States, serves the interests of those at the top, by providing them with low-paid workers. It serves the interests of those at the bottom, by offering them a chance to earn more money than they could in their native countries. But like so many other social and economic trends since the 1960s, it has squeezed those in the middle.

Harvard economists George J. Borjas and Lawrence Katz found that between 1980 and 2000, immigration lowered wages by 3 percent for all workers, and by 8 percent for high-school dropouts.

“Immigration has labor market consequences,” Borjas wrote. “A larger pool of competing workers lowers relative wages. This does not imply that immigration is a net loss for the economy. After all, the wage losses suffered by workers show up as higher profits to employers and, eventually, as lower prices to consumers. Immigration policy is just another redistribution program. In the short run, it transfers wealth from one group (workers) to another (employers).  Whether or not such transfers are desirable is one of the central questions in the immigration debate.”

Low wages for immigrants are justified on the grounds that newcomers to this country, without skills, education or the English language, deserve to earn less. This falls apart, though, when you consider that native-born citizens used to earn more money for the same jobs immigrants are doing today. It’s a canard to suggest that Americans won’t mow lawns, slaughter chickens or clean hotel rooms. How do we know this? Because lawns were mowed, chickens were slaughtered and hotel rooms were cleaned in 1962, when there were no immigrants to do that work. The “unskilled” argument was also used by steel barons when their mills were manned by Poles, Bohemians and Croats. Once those workers became citizens -- and, significantly, could not be replaced by a new class of immigrants -- those jobs were successfully unionized.

It is not surprising that immigration is a focus of the Tea Party’s populist resentment. Non-college-educated whites may always be skeptical of mass immigration -- and of politicians who support it. Their opposition to immigration isn’t just about race. It’s about money, too.

So, if banning immigration drove up wages in the 20th century, why don’t we do it again? For one thing, no matter the wishes of today’s nativists, a new Johnson-Reed Act would be impossible to pass, or enforce. It was an isolationist measure that has no place in a globalized world. We could, theoretically, cut off immigration from Africa, Europe and Asia, but the United States shares a border with a much poorer neighbor, which provides a constant supply of unskilled labor. Latino communities are now so well established in American cities that they have the political influence to demand open immigration policies. In Northern cities, Latinos are nowhere close to being the "foreigners" they were in the 1920s.

Raising the minimum wage and making it easier for service workers to join unions are obvious tactics for reducing exploitation of immigrants. But there are other, more subtle methods. California Gov. Jerry Brown recently signed a “Trust Act” prohibiting police from assisting in deporting immigrants who commit minor crimes. Brown also signed a law making it a crime for employers to threaten to report an immigrant’s legal status. The bill was intended to prevent employers from intimidating immigrant employees who complain about unsafe working conditions or wage theft.

“In many of these [low-wage] occupations and industries, vulnerable immigrants cannot exercise their labor rights or speak out against unfair or illegal working conditions without the fear of retaliation,” said Jose Mejia of the California State Council of Laborers.

We could also repeal the ban on immigrants collecting SNAP and Medicaid benefits during their first five years in the United States. Passed as part of the 1996 welfare reform, the ban reduces immigrants’ economic options, and thus their ability to refuse the worst jobs.

If the Tea Party really wants to reduce the impact of immigration on American wages, they should lobby for laws that make life easier for immigrants, not laws that aim to drive them out of the country.