"Whisky Tango Foxtrot": A techno-thriller with a soul 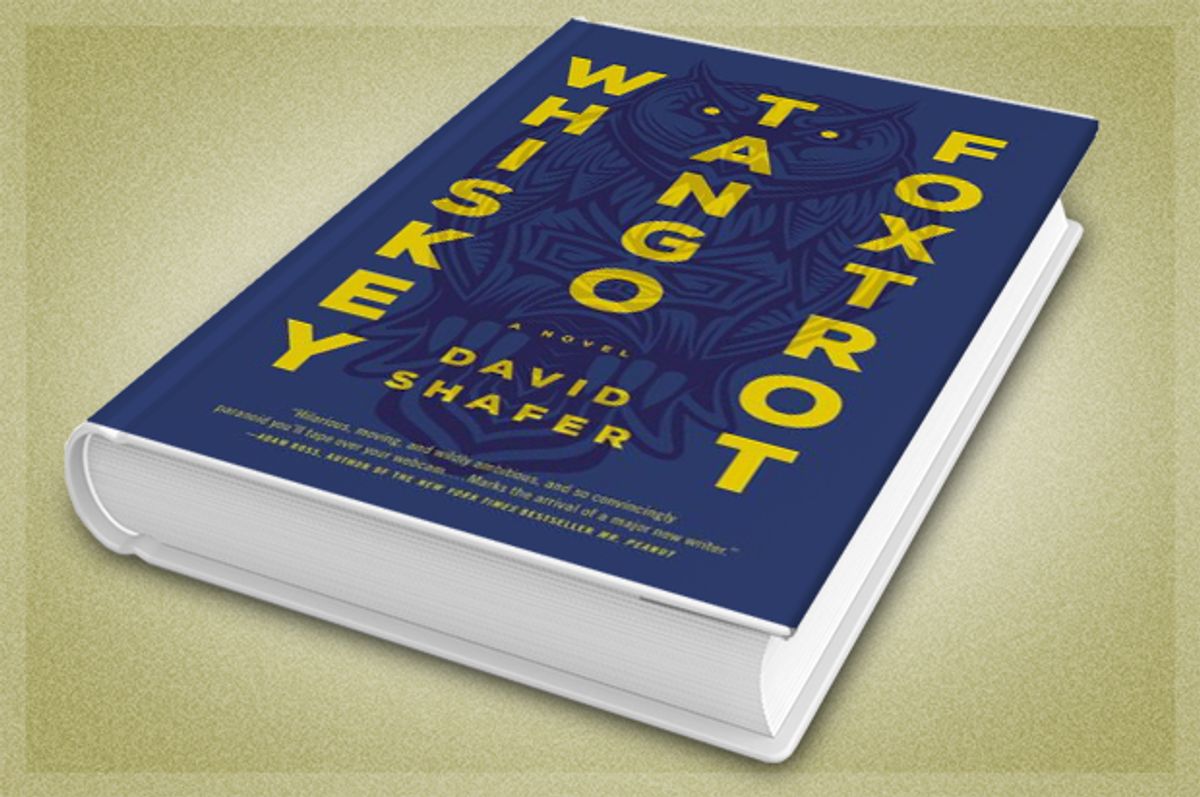 We all know the selling points of thrillers: exciting milieus and speedy pacing. Sometimes, however, those are the only good points, and if you spend a couple of weeks reading a bunch of these books, the predominance of a certain terse, self-important and weirdly earnest tone can get pretty tiresome. This is the real deal, the author seems to growl, the stakes are life and death, and let me tell you life is cheap to these international operatives/organized criminals/mercenary thugs. The brooding hero has typically been airbrushed of all the incidental pettiness, self-consciousness and ineptitude of an ordinary human being, presumable to make him (or, occasionally, her) someone we can look up to. But the whole life-and-death angle has a lot less impact when you can't believe a person like this has ever lived in the first place.

So, while I can see why David Shafer's smart and often very funny first novel, "Whiskey Tango Foxtrot," is being marketed (and praised) as a techno-thriller, part of me balks at the categorization, which conjures up images of square-jawed men ordering other square-jawed men to strap themselves into hazmat suits or state-of-the-art fighter planes, while, in an underlit room, the obligatory freakish keyboard cowboy hacks into somebody's mainframe. Then, of course, an objectionably youthful tech billionaire will be found lying in a pool of his own blood in his fancy modern mansion because no security system, no matter how sophisticated, can stop these guys.

"Whiskey Tango Foxtrot" is, by contrast, much more focused on characters -- as in, it has actual characters. They are three Americans in their 30s whose lives have been commandeered by forces beyond their control. Leila Majnoun, an Iranian-American working for a rinky-dinky NGO in Myanmar, accidentally stumbles over a couple of English-speaking private security contractors standing around the entrance to something out in the forest. Peeved to find herself tailed afterward by what she assumes to be government minders (they frighten off all of her carefully cultivated local contacts), Leila shoots out an email about the encounter in the jungle to her contacts back home, including several reporters and an investigator for the UNHCR ("Whoever is doing work up there, I think they’re flying in tech-support guys with bodyguards. I know, right? I said it was fishy"). The next thing she knows, she's asked to leave the country and her father, a school principal in California, has been busted on trumped-up charges of hiding child pornography on his computer.

Meanwhile, Leo Crane, possessor of a modest trust fund in Portland, Oregon, loses yet another low-prestige job. This precipitates a plunge into one of the trenches of his wide-swinging mood disorder. On the basis of his increasingly demented Internet posts, his older sisters stage an intervention. He persuades them he just needs rehab, although one does ask, "What about all that stuff you wrote on your blog? About the shadow government, the plan to sneak tyranny into our lives through convenience, the massive plot to control all the information in the world?" Turns out she wasn't the only one to notice those posts.

Lastly, and most deliciously, there's Mark Deveraux, a former flack who once, while "bombed on OxyContin and Pouilly-Fuissé chardonnay," sat down at his kitchen table and wrote a pretty good, Camus-infused 10,000 word essay "on how a person -- no, how Mark, how he himself should arrive at right decisions," then published it on a friend's website. The essay became a viral hit, and the next thing Mark knew, he'd been swept into the orbit of Jack Straw, "squillionare" owner of SineCo, a "digital-search-and-storage conglomerate" manifestly based on Google.

In a thrice, Mark's essay is unrecognizably repackaged into a self-help bestseller called "Bringing the Inside Out," his bank account filled with speaking fees and his calendar with appearances on daytime TV talk shows. He becomes Straw's "life coach," which mostly just requires him "to find the man’s rambling soliloquies compelling, pretend to see meaning in them, then offer some not too transparent but not too opaque homily or parable that confirmed what Straw already thought." These duties do not interfere with his robust substance abuse, but they do boost his self-loathing. When the novel opens, Mark is obliged by an incomprehensibly baroque contract to write a follow-up to "Bringing the Inside Out." However, every time he sits down to draft, say, "Ten Steps to Committed Living," he comes up with items like, "One: Quit Being Such a Scattered, Drunk Loser."

At first Leila, Leo and Mark appear to be unconnected, but when Leila receives a tip on how to help her father, she becomes involved with Dear Diary, an Anonymous-like band of digital insurgents who claim to be battling a "secret sovereign corporate state" who are "planning an electronic coup so that they will control the storage and transmission of all the information in the world." Jack Straw is, of course, a major player in the group, and he invites Mark aboard his "megayacht" to offer him the position of "Storyteller in Chief" for the soon-to-be-launched data empire. "Money does not come close to describing what we’ll make a lot of," one of Straw's factotums tells Mark, as they witness mammoth servers being deployed to the ocean floor. "'And yes, right now this part runs up against something called the "right to privacy"' -- she made air quotes—'which is a notion that hasn’t really meant much in thirty years and means less every day. You may as well defend people’s right to own steamboats. Someone’s going to control access to all the data and all the knowledge.'"

In response, Dear Diary has assembled a counter-conspiracy of borderline-mystical quality, but the nuts and bolts are not what "Whisky Tango Foxtrot" is about. Comparisons to Neal Stephenson and even Thomas Pynchon capture some of the speculative extravagance of Shafer's premise, but he's not as interested as Stephenson is in plausibly detailing just how such plots might be executed. And unlike Pynchon, Shafer's characters are not cartoons frolicking through a preposterous farrago of paranoia and folklore singing unfunny "comic" songs. Instead, Shafer etches diamond-sharp and precisely observed contemporary satire of everything from Heathrow Airport to the fatuity of high-tech and celebrity culture. At the same time, the friends Leo makes in rehab and Leila's wrangling with her family feel soulful and authentic. Shafer is particularly good at portraying the prickly but adamantine love between siblings, which may explain why Mark, an only child, is the most truly lost of the three.

Leila, Leo and Mark -- their confusion, their self-doubt and their muddled strivings to, as Mark puts it, "arrive at the right decisions" -- are the real subject of "Whisky Tango Foxtrot." While the novel's jaunts through conspiracy theory and near-futurism supply it with plenty of energy and mind-bending complications, it's the steady coalescing of these three unsteady selves that defines the narrative. Those who expect an action-packed climax will be both disappointed and missing the point. The stakes are not merely life or death, but the difference between a blundering through one's life and fully possessing it.