Break up the states! The case for the United Statelets of America

Here's how Wyoming, Vermont and North Dakota are exercising tyranny over the rest of us -- and how to stop them 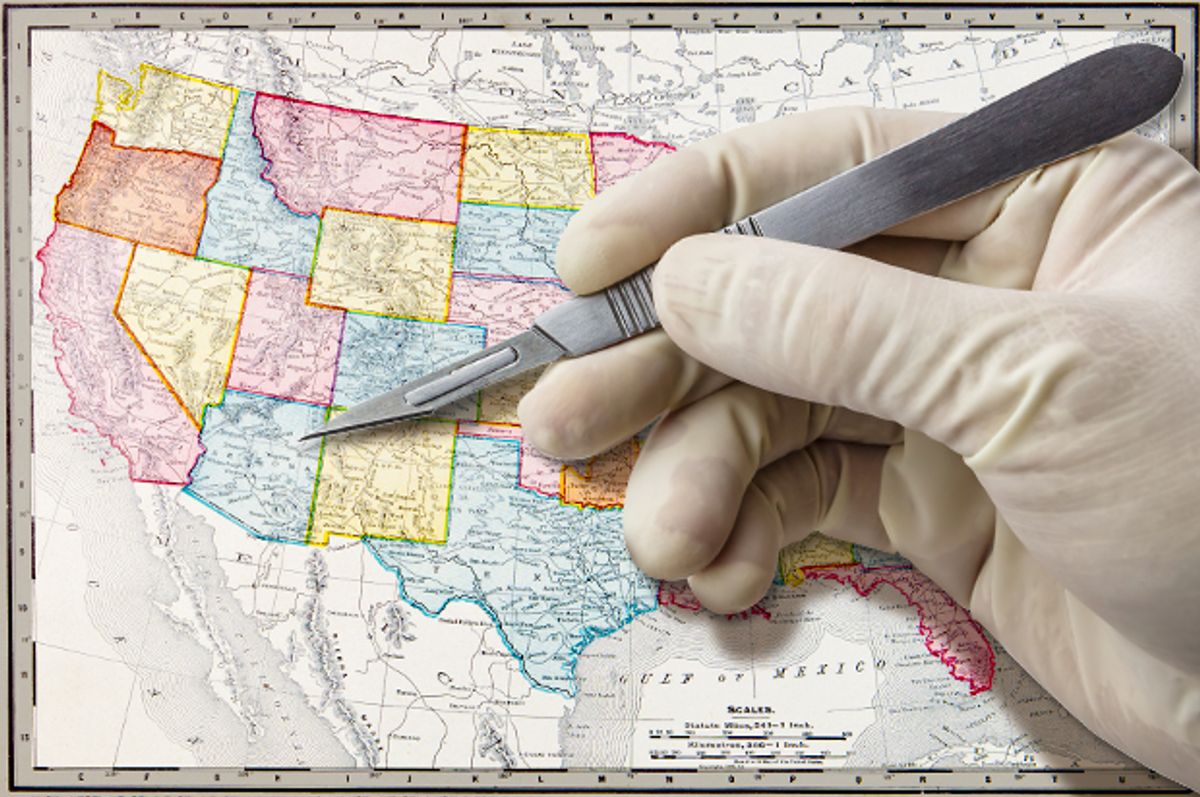 A ballot initiative that would support breaking California into six smaller and more coherent states is being backed by Timothy Draper, a tech investor.  It’s a great idea.  But why stop with California?  Breaking up all of the too-large states would increase both the accountability and efficiency of the U.S. government.

America’s state governments are too big to be democratic and too small to be efficient.  Given an adequate tax base, public services like public schools and hospitals, utilities and first responders are best carried out by cities and counties.  Most infrastructure is either local or regional or national.  Civil rights, including workers’ rights, should be handled at the federal level, to eliminate local pockets of tyranny and exploitation.  Social insurance systems are most efficient and equitable when they are purely national, like Social Security and Medicare, and inefficient and inequitable when they are clumsily divided among the federal government and the states, like unemployment insurance, Medicaid and Obamacare.

So what are state governments particularly good at?  Nothing, really.  They interfere in local government, cripple the federal government, shake down lobbyists and waste taxpayer money.

Few if any state borders correspond to the boundaries of actual social communities with a sense of shared identity.  A look at county-level voting maps shows that, in terms of politics, rural Americans everywhere generally have more in common with their fellow hinterlanders than with their urban fellow citizens in their own states — and vice versa.  Arbitrary state boundaries merely insure that state legislatures will be the scenes of endless battles between country mice and city mice, resulting in stalemates that don’t serve the interests or reflect the values of either mouse species.

Not only is the state level of government a mostly useless layer of politics and bureaucracy between the city or county and the federal government, it’s also more dominated than local government by the well-financed and the well-organized.  Nearly a century ago John Nance “Cactus Jack” Garner of Texas, FDR’s first vice-president, proposed that Texas be divided into multiple states because of the high cost of statewide campaigns.  Expensive statewide campaigns tend to result in a state political system dominated by rich donors, corporations and banks, or powerful lobbies like public sector unions.

New States may be admitted by the Congress into this Union; but no new States shall be formed or erected within the Jurisdiction of any other State; nor any State be formed by the Junction of two or more States, or parts of States, without the Consent of the Legislatures of the States concerned as well as of the Congress.

No state has been formed from part of another state since West Virginia broke off from Virginia during the Civil War — but not for want of constitutional authority.  The constitution authorizes states to divide into smaller states or fuse into larger states, with the permission of both the state legislatures and Congress.

Among other things, this dormant constitutional provision provides a solution to the malapportionment of the U.S. Senate that does not require a constitutional amendment — merely approval by the relevant state legislatures and a majority in Congress.  America’s upper house is the most malapportioned in the world.  By 2025, the population difference between California and Wyoming will be 70-to-1 — and yet both California and Wyoming will have two senators.  In theory, a micro-minority of 17 percent of American voters can elect a majority in the Senate.

If we assume that microstates like Wyoming are not going to give up their two U.S. senators, then macrostates like California, Texas, Florida and New York should voluntarily divide themselves, in order to boost their representation in America’s upper house.  Under the Six Californias plan, for example, residents of present-day California would send 12 senators to Washington, not two.

And because they are smaller, the successor states to the Former California would be more citizen-friendly.  A citizen of Wyoming, Vermont, North Dakota or Alaska — the four least populous states -- has a much better chance of influencing the legislature or arranging an appointment with the governor than does a citizen of California or Texas who is not backed by an army of lobbyists or hundreds of thousands of dollars.

Back in 1998 in Mother Jones I speculated about what the political map would look like if the U.S. added 25 states carved out of today’s populous states. Interested readers can find the article here (warning: The Mother Jones editors came up with the silly state names).

A fifth-generation native of Central Texas who worked in the state legislature, I agree with Cactus Jack Garner that the State of Texas is too big and should be broken up.  When the former republic of Texas was admitted to the Union, it should have been admitted as several states, not one.  Another missed opportunity came during Reconstruction, when many of the freed slaves of East Texas, the German-Americans of Central Texas and the Mexican-Americans of South Texas lobbied Washington to divide Texas into several states to protect them from postwar repression by Anglo-Celtic Southerners.  The failure to do so allowed the former Confederates of East Texas and their descendants to recapture power in Austin, the state capital, and lord it over minorities in Texas to this day.

An independent Central Texas could be a high-tech social democracy, with really good music and movies, once liberated forever from the Protestant fundamentalist Taliban of East Texas.  Willie Nelson could compete with Kinky Friedman to be the first governor.  To prevent rivalry between Austin and San Antonio, the new state capital of Centex should be located in a neutral place — say, Luckenbach, Texas.

New borders among new and old states would not be a problem.  There are no state tariffs and no border checkpoints at state lines now, and there would not be any if we had more states.

There are only two plausible practical arguments against the voluntary, congressionally approved subdivision of America’s populous states.  One is that some of the new states would be poor and no longer subsidized by richer regions in the former big state.  This is a valid objection, but the answer is to replace state-level revenue sharing with federal revenue sharing.  The federal government should use income, wealth and consumption taxes to tax the American rich wherever they happen to live, work and consume and disburse the revenues directly among American cities and counties, bypassing state legislatures as much as possible.

The other argument is that many infrastructure projects would necessarily transcend small-state borders.  But this is true even today.  Infrastructure systems like regional electric grids and inland waterways are regional in scope. Multistate compacts or agreements between states to deal with shared rivers and infrastructure already exist and are the best way to address the problem.

Nobody should underestimate the power of inertia in American politics.  But we will never have any progress, if we accept stupid things just because they are old.

At this point, to the tune of “Yankee Doodle” on a fife and drum, somebody in the peanut gallery will object that our system represents the “genius of the Founding Fathers.”  Sorry, peanut gallery patriots — the major Founders hated the overrepresentation of small states in the Senate.  For most of their political careers, Alexander Hamilton favored more centralization, while the “Father of the Constitution,” James Madison (except early in his career), was for states’ rights.  But these two co-authors of the Federalist Papers agreed that states should be represented in the Senate on the basis of population and that the compromise in the Constitution that gave each state two senators, no matter its size, was a mistake.

In the guise of denouncing the Articles of Confederation, Hamilton made his feelings clear in Federalist No. 22:

The right of equal suffrage among the States is another exceptionable part of the Confederation. Every idea of proportion and every rule of fair representation conspire to condemn a principle, which gives to Rhode Island an equal weight in the scale of power with Massachusetts, or Connecticut, or New York; and to Delaware an equal voice in the national deliberations with Pennsylvania, or Virginia, or North Carolina. Its operation contradicts the fundamental maxim of republican government, which requires that the sense of the majority should prevail…. It may happen that this majority of States is a small minority of the people of America; and two thirds of the people of America could not long be persuaded, upon the credit of artificial distinctions and syllogistic subtleties, to submit their interests to the management and disposal of one third. The larger States would after a while revolt from the idea of receiving the law from the smaller.

The proposal for Six Californias is likely to fail, given all the veto points in the American political system.  But the heroic struggle for Splittism must go on.  If America is to be a truly democratic nation, we must end the tyranny of Wyoming, Vermont and North Dakota — and free the dynamic statelets waiting to be born from California, Texas, New York and Florida.  Viva Centex Libre!