I hate when my husband tries to be a "cool dad": Why you shouldn't believe the new Cheerios commercial

Everyone loves the "cool dad" -- bouncing around the house with his kids, cracking jokes and being awesome 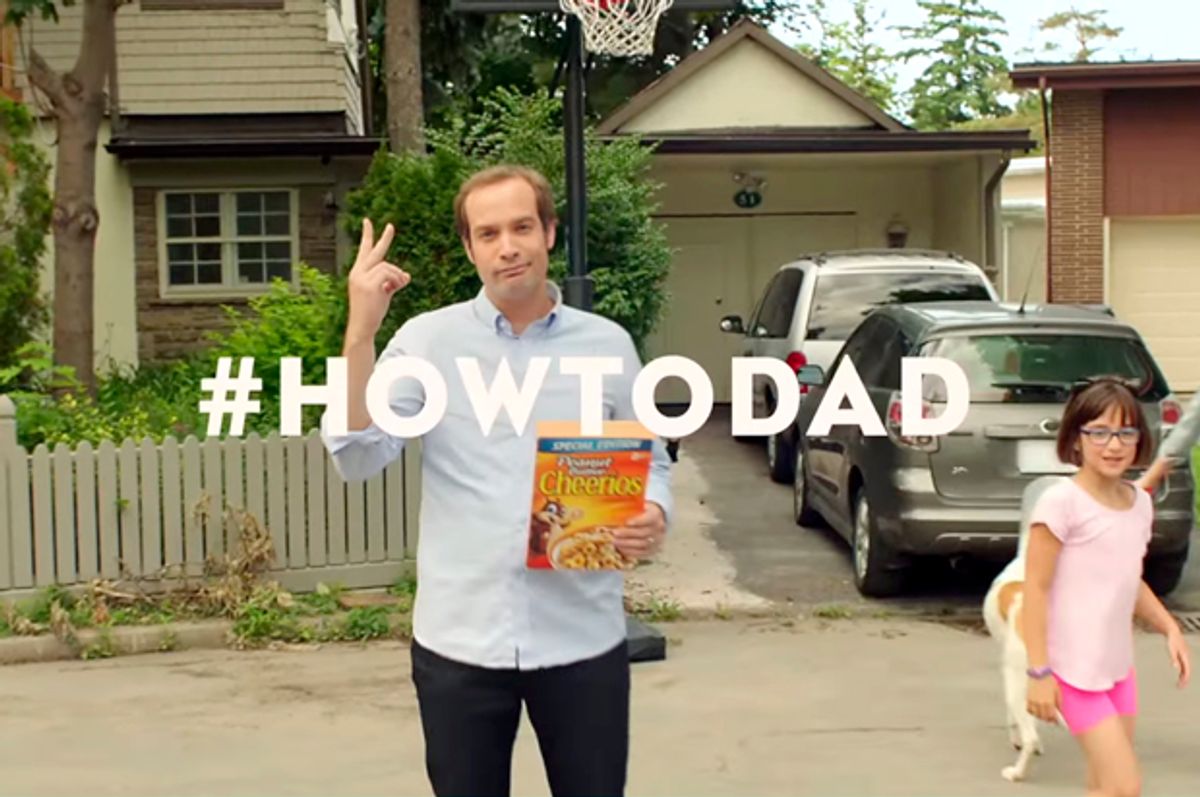 My husband’s idea of breakfast ends with dessert. He takes my daughter to Starbucks. Orders her a fancy egg sandwich. And if she can finish most of it, she gets the pink cake pop. My son gets a Rice Crispy Dream Bar.

My husband isn’t the first dad to dole out sweets in the morning. Bill Cosby talked about feeding his kids chocolate cake for breakfast in his 1983 stand-up “Himself.” The kids sang, "Dad is great. He gives us chocolate cake!" And Mrs. Cosby's response to seeing him feed his kids chocolate cake was a riff on the stereotypical controlling wife: “Her hair split and came off of her face so that there was nothing except a skull. An orange light came out of her hair.”

My reaction to my husband's "cool dad" routine is about the same as Mrs. Cosby’s. "Why are they eating this?" I fume. My mind recalls in horror the jittery aftereffects of Capt’n Crunch, Fruity Pebbles and Trix, the sugar-coated cereal of my childhood. I am the mother who tells my children not to believe commercial slogans. I am the Breakfast Police. My kids look up guiltily from their sugar-infested treats and say, “We ate a healthy breakfast. Now we want to eat this.”

My husband slinks around the kitchen with a smile on his face because he’s done well. He got the gold medal from the kids. No one is crying. Everyone’s blissed out. He’s the cool dad.

I hate the myth of the cool dad. He's everywhere: cracking wise on sitcoms, imparting laid-back pearls of paternal wisdom in summer movies. And now General Mills is trotting him out again with its new campaign for Peanut Butter Cheerios. An uber-positive, energetic dad shoots off a rapid-fire manifesto about fatherhood. “Kids think we’re awesome. We get our hands messy. We tell hilarious jokes. We never say no to dress-up. We lead by example. We blow their minds.” Dad hands a mom, who is dressed in a suit — a cup of coffee. “Wife and coffee,” Dad brags. It culminates with Dad calling the new Peanut Butter Cheerios the “cereal of dad hood.” With dad dropping a peace sign behind title card #howtodad.

First, I’d like to give Cheerios credit: They’ve done away with the stereotype of the “bumbling” dad we’ve been used to seeing in commercials for decades. In 2012, Huggies depicted a group of dads who wouldn’t change their babies’ diapers because they were too immersed in a football game. As a result of backlash and a few viral Internet petitions, Huggies reissued new ads showing fathers caring for their toddlers, without inciting diaper rash.

So this is a good first step depicting dads as positive representations. My husband, for all of his sugar-inducing breakfasts, is a present, energetic, playful and, yes, boundary-asserting father.

Except, when you define dad as the cool one, as the one who can get his hands “messy,” you are firmly pigeonholing mom in her role as the lame one. You are suggesting that Mom is uptight. That Mom doesn’t have a sense of humor. Or that Mom doesn’t do dress-up. Or Mom would freak out if you ate Peanut Butter Cheerios. In a 19-second YouTube spinoff, Dad — who “makes it rain” with the Peanut Butter Cheerios because, yes, this dad shakes Cheerios up and down the street for no apparent reason because he’s that kind of dude — tosses Mom a Cheerio. Mom almost catches it in her mouth, except then, she doesn’t. Because she’s just not that cool. Because she can’t handle life like Dad. Because Mom is a martyr. Or Mom doesn’t do sugary cereals or anything else messy. Mom is about rules.

Cheerios — you had your moment! If Mom caught that one, tiny Cheerio in her mouth, if she nailed it, the outcome would have been an entirely different message.

So I want to see a commercial where Mom defiantly walks around the house letting people jump on beds, spins wisdom about "Star Wars" (in the Cheerios commercial there’s a Vader/Luke reference), and tells her teenage daughter that she looks awesome in her profile picture. Where Mom doesn’t even mention that the kids are on their iPhones and headphones in the morning before school (because what’s that about, Cheerios?). I want to see a commercial where Mom is never cranky. Where her kids are following her like a pied piper — by choice! — with a Black Keys soundtrack cranking in the background.

Except in my commercial, there would be one rule: no dessert cereal for breakfast. And the Mom would still be cool.