Here's what Stephen A. Smith should have said to apologize for his domestic violence ignorance

A second apology from Smith falls flat. Here's what he should have said -- and done -- to make things right 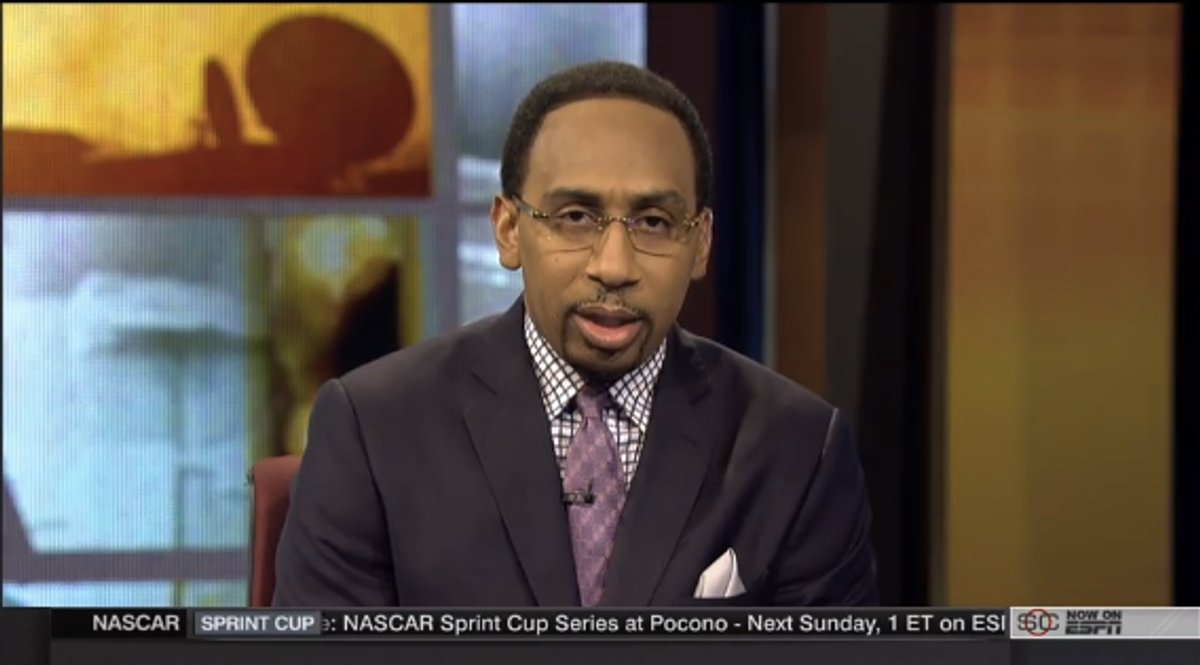 Stephen A. Smith apologized last Friday for his comments about women's "provocation" of domestic violence, but since his apology was just a series of tweets expressing his annoyance at having his remarks "misconstrued," it seems his bosses at ESPN gave him a mulligan. (That is a sports thing, you guys.)

As predicted, ESPN released a comment distancing itself from Stephen A.'s views, calling them out of line with the company's values. "We will continue to have constructive dialogue on this important topic," the network said in a Monday statement. "Stephen's comments last Friday do not reflect our company's point of view. As his apology demonstrates, he recognizes his mistakes and has a deeper appreciation of our company values.”

And here is an excerpt of Smith's do-over apology from Monday's "First Take":

On Friday, speaking right here on "First Take" on the subject of domestic violence, I made what can only amount to the most egregious error of my career. [...]

My words came across that it is somehow a woman’s fault. This was not my intent. It is not what I was trying to say. Yet the failure to clearly articulate something different lies squarely on my shoulders. To say what I actually said was foolish is an understatement. To say I was wrong is obvious. To apologize, to say I'm sorry, doesn't do the matter its proper justice, to be quite honest. But I do sincerely apologize.

As a man raised by the greatest mother in the world and four older sisters, I have religiously spoken out against domestic violence all of my life. I've done so repeatedly over 20 years in this business, as well as over these very airwaves, right here on "First Take."

Initially, the problem was his audience's apparent inability to understand the words coming out of his mouth. Then the problem became his own failure to articulate his views. Neither apology addressed the possibility that Smith was just dead wrong about domestic violence, and that he has more work to do to educate himself so that he won't be wrong again in the future. ESPN was equally unwilling to own the problem.

Now I'm not a professional apology-writer, but here's a first shot at a more satisfying apology:

I am sorry that I suggested that victims of domestic violence are at all to blame for the violence committed against them. What I said Friday perpetuated a dangerous myth that women's behavior is a cause of domestic violence. This is abuser's logic, and I passed it off as violence prevention. Clearly, this is a message survivors have heard before, which is why so few feel safe coming forward about the abuse they experience.

It's obvious from my comments that I have a lot to learn when it comes to supporting survivors and taking real steps to help deter violence, two things I intend to use my platform to do moving forward. I started that process over the weekend by talking with my friends and family, as well as my colleagues and fans at "First Take." I also consulted experts and survivors who helped me understand the consequences of such ignorance. Perpetrators are responsible for their own actions, and an abusive partner cannot be controlled or contained by their victim. Suggesting they can only hurts victims and forces them to internalize blame. I understand that now.

Getting to a place where I can truly support survivors will require a lot of work on my part, but I'm here to do it. I know that I may stumble in this process, but I know that I have people in place, at this network and in my personal life, that will hold me to account when I do.

Not so hard, right?

This should have been -- and can still be -- an opportunity for ESPN to devote air-time to the issue of domestic violence and how it is ignored and condoned in professional sports. To hire professionals to teach employees like Smith how to discuss the issue with accuracy and compassion, since clearly this isn't a problem unique to Smith.

The beautiful thing about fuck ups is that you really can learn from your fuck ups. But judging from Smith's pattern of blaming victims of domestic violence and his failure to actually own up to his ignorance, he's not going to learn from his mistake. And judging from ESPN's willingness to write this off as a constructive dialogue without actually engaging in that dialogue, it looks like nothing is changing at an institutional level, either.

But domestic violence in sports isn't going anywhere, unfortunately. ESPN should take the mulligan and, like Smith's co-host advised on Monday, do better next time.