Ted Cruz, not having enough on his plate, is now blocking all State Department nominations over an FAA conspiracy 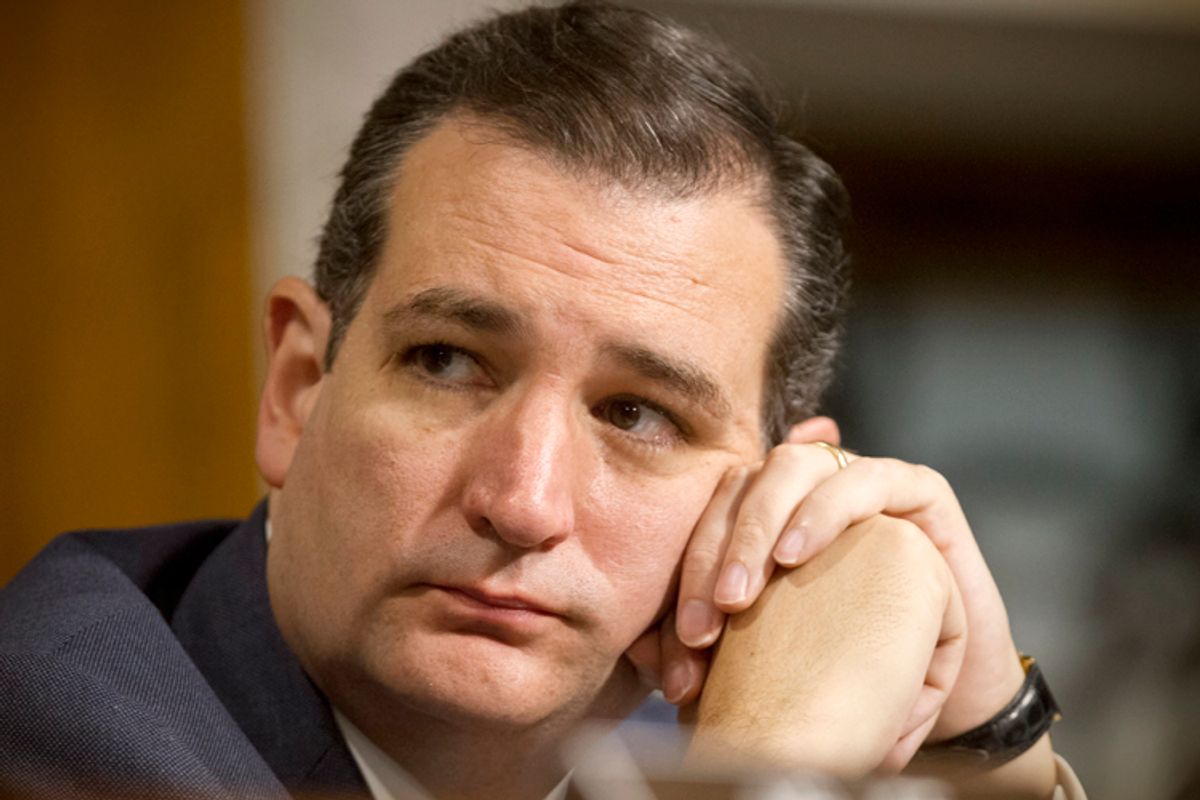 Last week the Federal Aviation Administration suspended U.S. flights to Tel Aviv's Ben Gurion International Airport twice, each for a 24-hour period. The agency acted "in response to a rocket strike which landed approximately one mile" from the airport. Jitters over the downing of flight MH17 over eastern Ukraine also probably led the agency to err on the side of caution when it comes to flights descending on the fields of battle.

The second 24-hour cancellation was cut short Wednesday night. "Before making this decision," the agency said in a release, "FAA worked with its U.S. government counterparts to assess the security situation in Israel and carefully reviewed both significant new information and measures the Government of Israel is taking to mitigate potential risks to civil aviation."

The governmental ban had infuriated Israeli officials abroad as well as some of Israel's more strident domestic supporters. They cited the ban -- also placed by most European countries' aviation regulators -- as an overreaction that would have political ramifications in handing a victory to Hamas. Former New York City Mayor Michael Bloomberg, who is bored and has the time and resources to do things like this, somehow got himself on a flight to Ben Gurion that arrived Wednesday morning solely to show "solidarity with the Israeli people" and "that it’s safe to fly in and out." He added that "halting flights here – when the airport is safe – hurts Israel and rewards Hamas for attacking Israel. Hamas wants to shut down the airport; we can’t let that happen." AIPAC offered a similarly political line in urging a lift of the ban: "Moreover, we are concerned that it could have the unintended effect of encouraging terrorists to become even more committed to make civil aviation a target."

Also raging over this was Sen. Ted Cruz, last seen running border legislation in John Boehner's House of Representatives. Cruz released a statement in which he wrote, "the facts suggest that President Obama has just used a federal regulatory agency to launch an economic boycott on Israel, in order to try to force our ally to comply with his foreign-policy demands." Facts either say or don't say something, they don't "suggest" anything. And it's unclear what "facts" he's working with here, aside from vague hand-waving about how Obama and John Kerry hate Israel.

Cruz went on Fox News later that night to expound with Sean Hannity:

"The Obama administration is the most anti-Israel administration this government has ever had," Cruz said. He asked why air traffic to Israel, rather than Pakistan, Yemen, or Ukraine was cut off. "The timing was at the exact moment Kerry was there trying to strong-arm Israel into stopping their efforts to shut down Hamas’s rockets and tunnels," he continued. Essentially, Cruz argued, Obama was trying to choke off Israel's tourism industry until it consented to a Gaza cease-fire.

When host Sean Hannity showed him video of a State Department spokesperson calling his accusations "ridiculous" and "offensive," Cruz fired back, saying: "What is ridiculous is the Obama Administration refusing to answer simple questions about whether this was dictated by politics." Never mind that, seconds earlier, the video showed the State spokesperson saying safety was the FAA's only consideration. Cruz announced that he'd place a hold on all State Department nominees until he got the answers he wanted. ("Good for you," Hannity said.)

Right, when the State Department responds that his accusations are "ridiculous" and "offensive," that should count as its answer to "simple questions about whether this was dictated by politics." The answer would be "no." Simple answers to simple questions.

So that's what Cruz has now done until he gets ... more ... answers to his very simple questions: put a hold on all State Department nominees.

And there are some critical nominations pending. As BuzzFeed's Rosie Gray reported, the nominee for ambassador to Russia -- "Russia" being a fairly important geopolitical player -- is due for a confirmation hearing tomorrow. That would presumably lead to a confirmation vote shortly thereafter.

It's strange that Cruz is accusing the Obama administration of making a political decision here. If any top-level strong-arming was at play, it would have been to end the flight ban prematurely Wednesday night. Moreover, "the facts suggest" -- as in, make clear, because they are facts explicitly saying so -- that the argument that Cruz, Bloomberg, AIPAC et al. were making was the only openly political one. They were criticizing the FAA's decision to briefly ban flights to one airport because it would hand Hamas a political victory. Questions of safety on the criticizers' part were dismissed out of hand. Ehh, it's fine. Bloomberg flew there, and he didn't get shot down, so what's the big deal? The big deal is that a freaking rocket nearly blew up an airport and so the FAA put the chills on for like 30 hours. To some, though, temporary cautionary measures to protect Americans' safety are of secondary importance to not letting Palestinians record a perceived symbolic victory, and therefore the administration's diplomatic corps must remained understaffed as punishment. Who's being political, here?