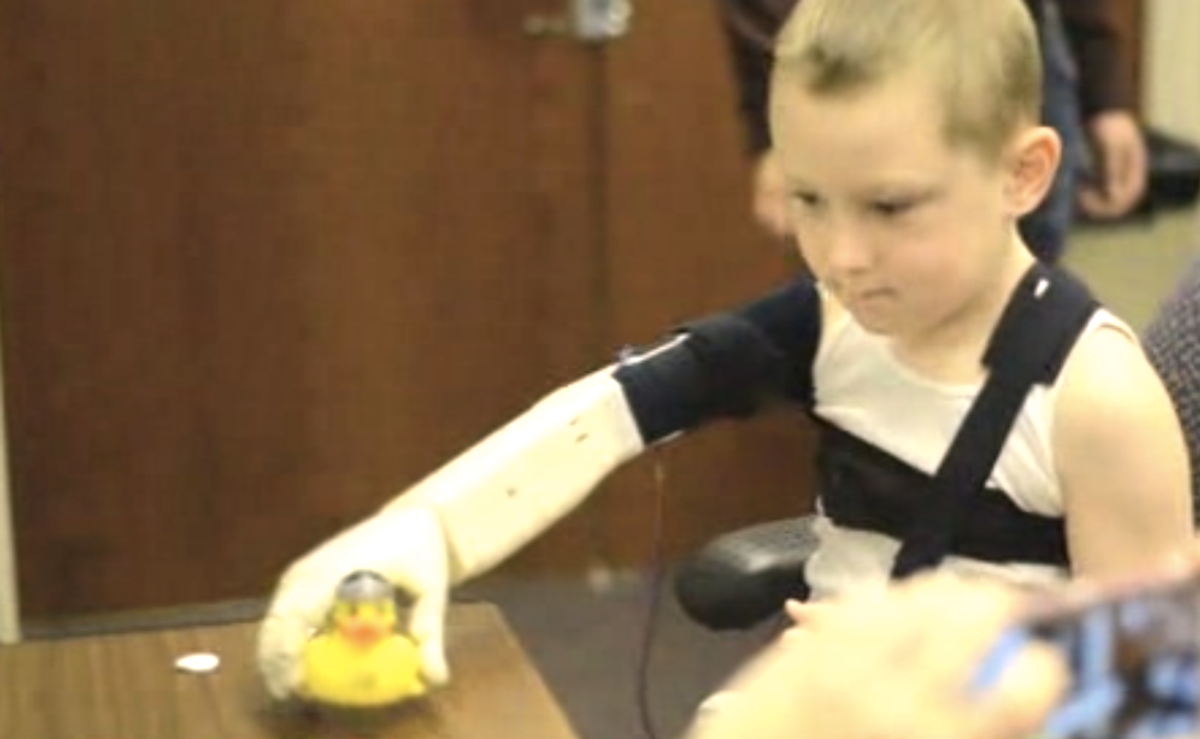 Six-year-old Alex Pring, of Groveland, Florida, reaches out for a fist-size rubber duck. Focused, his robotic milky white fingers close, and he grips the duck, raising his arm triumphantly. "I got the duck!" he shouts.

Seconds later the duck slips from his grasp and onto the table, but that hardly matters. This is a moment of victory for Alex Pring.

It is also an incredible achievement for a team of student engineers at the University of Central Florida, who built the "bionic" arm Pring used to clutch the duck -- and, according to the Sun Sentinel, it cost them under $350.

Pring was born without a full right arm; he is one of 1,500 children born in the United States with missing or deformed hands and arms, according to the Sun Sentinel.

Up until now Alex Pring has been without a prosthesis. His parents' insurance company refused to pay for a prosthetic arm, due to the high cost -- $40,000 -- and the fact that children grow out of their artificial limbs so quickly. His parents, Alyson and Steven Pring, were unable to afford the out-of-pocket expense.

The Prings turned to an online volunteer organization e-NABLE. By their own definition e-NABLE is "a World wide movement of tinkerers, engineers, 3D print enthusiasts, occupational therapists, university professors, designers, parents, families, artists, students, teachers and people who just want to make a difference." It was inspired by two makers who created a 3-D-printed prosthetic hand for a South African boy and then gave the blueprints away for free.

The organization put the Prings in contact with Albert Manero at the University of Central Florida. Manero is a Fulbright Scholar, with both his bachelor's and master's in aerospace engineering. He is currently pursuing a Ph.D. in mechanical engineering.

Manero led a team of student engineers in creating a "bionic" arm for Alex Pring. Unlike other prostheses, Alex Pring's arm cost less than $350 worth of materials. The arm took eight weeks to create, and was built using a 3-D printer, instructions downloaded from the Web, along with batteries and other mechanisms purchased online.

The design for Alex's bionic hand, which can grasp objects, came from 21-year-old Mateo Alvarez, a senior majoring in aerospace engineering. “Alex flexes his muscle and he can use that to open and close his hand,” Alvarez explained to the Sun Sentinel.

At the six-week prosthetic trial, within minutes, Alex was able to figure out how to open and close his new digits. His next move, according to his mother Alyson, was to give her a two-armed hug.

Alex Pring received his finished arm this week. As he grows, the cost of materials for an updated model will only be around $20.

"I wanted an arm so people would stop calling my arm names," Alex told the Sun Sentinel. "It hurts all my feelings. Everyone is born different. Everyone is special for what they do."

Watch this video from the Sun Sentinel, provided by the University of Central Florida.