I'm a lesbian marrying a man 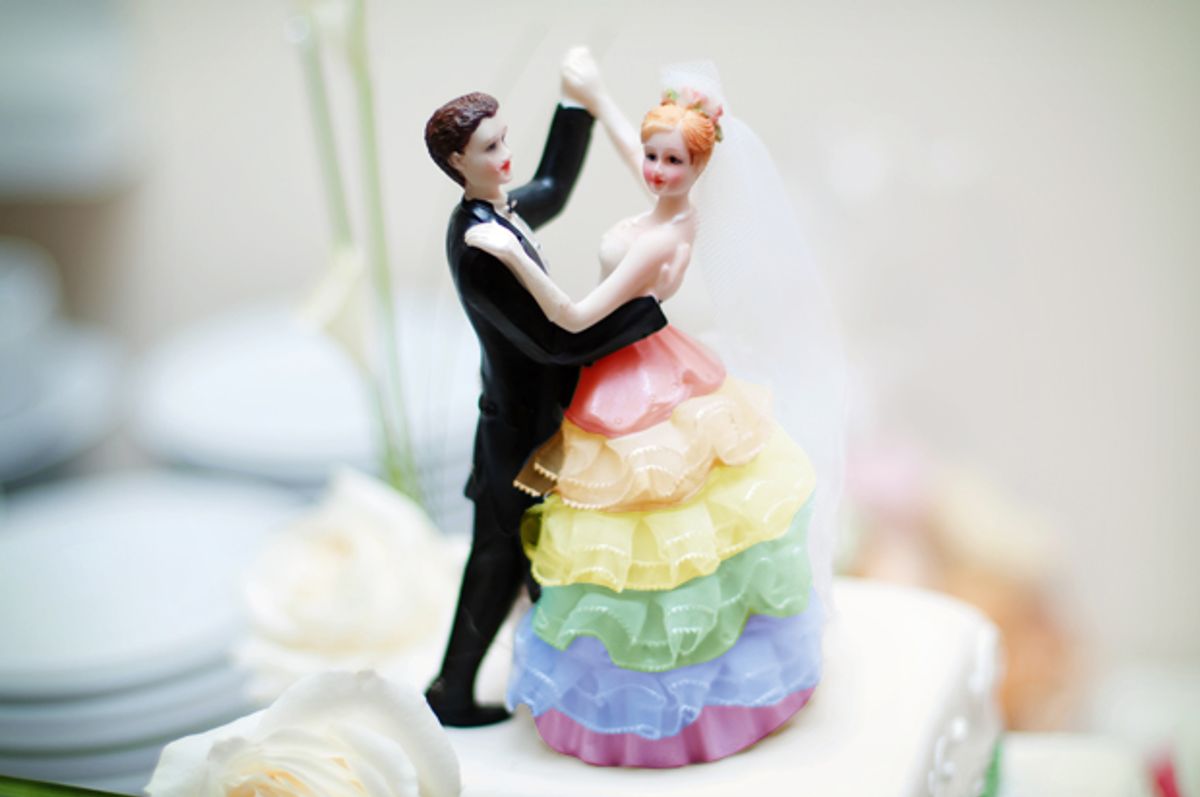 I was in a bar in Chicago when I told a close friend of 20 years that, despite being a lesbian, I was marrying a man. My friend and I hadn’t seen each other in a while, but we fell back quickly into our old intimacy -- those long, rambling conversations we used to have in coffee shops all over Minneapolis. When the subject shifted to an activist group she was part of, I said I’d be glad to help, if they needed a lesbian on their board. She laughed, dismissively. “You can’t call yourself that anymore.”

Of all the weird reactions I’d gotten to my engagement, that one pissed me off most.

I had not been not surprised when my fiancé’s friends — Washington insiders with the respect for convention that city inspires — expressed shock when they discovered I was a dyke. We came from different worlds; with my long brunette hair and short skirts, I hadn’t read as queer to them. But no one had presumed to relabel me, to retrofit me to their categories — at least, not to my face.

But here was my fabulous Portland pal, trying to claim me for the Bi-Het team (which sounded like a synagogue rather than a sexual identity, and certainly not my own). She wasn’t the only one: An ex-girlfriend and a sophisticated poet cousin said the same thing, as if my lesbian license had been revoked.

So let me be clear, since I can’t be the only one: I am a lesbian marrying a man.

This is not semantics, or splitting hairs; it is fundamental to who we are — my fiancé and I. Immutable as height or eye color.

Call it a kind of intermarriage. I am 5-foot-9, brunette, lesbian, that won’t alter because of our vows; nor will my love of women, though I won’t be dating them. If either of us had to pretend otherwise, I wouldn’t be marrying this man. It is precisely because our love makes room for us to be who we are, rather than cutting us to fit convention, that I want to spend my life with him.

One of the things I cherished about coming out as a lesbian years ago was the wonderful sense I had that I was leaving behind received forms of love, those that seemed to have disappointed my parents and friends. We were free to invent our own, something authentic, not roles we shrugged on like a borrowed coat.

Still, I can’t blame those I love for trying to recast me in more familiar terms — as bisexual or straight. I’ve done the same sort of mislabeling myself. I did this with the man I love when we first met.

When I first sat down beside the man I would marry, I thought, “Too many sport coats, too little hair.” It was ungallant of me, a glib assessment, born of a writerly habit of sizing up characters. I didn’t recognize this habit as defensive, a way of trying to contain what was foreign to me, what might unsettle my world.

My world, if I’d had to sum it up then, was composed of lesbian activists and writers, with a smattering of hip-ish academics at the university in D.C. where I taught then. People in my world subscribed to the Nation and the New York Review of Books, and understood that a reference to the Times always means New York’s. People in my world did not wear sport coats (except perhaps ironically to a "Mad Men" party).

But there was something about this guy that I liked, despite my initial reflexive dismissal. Sitting next to him, I understood for the first time the term “take a cotton to.” I felt as if the fibers of my body were stretching toward him, affectionately, or like iron filings toward a magnet. As he will later tell the story, we’d come to meet other people, but in the crowded wood-paneled lounge we’d ended up next to each other, sharing a drink.

Over that drink, I learned he had been a graduate student in New Haven when I was an undergraduate there. In those days, he had recently returned from the Peace Corps in the Solomon Islands and North Africa, while I was slowly, painfully coming out, finding my way from an economics major to books. We talked about languages we speak — Arabic, Portuguese, pidgin, lousy French — and Shakespeare plays we love, of which he could quote an impressive amount. He told me about early navigation by stars, about having been a race-car mechanic at Monaco, climbing the world's tallest mountains, his former work with NASA, his current work with a commercial space company charged with being the garbage collectors of the International Space Station, delivering underwear and chocolate bars to the space station and picking up its trash.

Through it all, I found it hard to look at him: The wonderful smell of this man made me want to laugh out loud with pleasure, as did the lovely, slightly mannered, slightly pompous way he spoke (so like my own slightly mannered, slightly pompous speech). And I recognized in that delight, to my great surprise, desire. Later, I will realize that he looks a great deal like my first girlfriend (who looked a great deal like the writer Peter Matthiessen — slender, weathered face, salt and pepper hair) and my last cat (the same green eyes and self-satisfied smile). But when the drink was done, I left without looking back, without imagining anything could come of this.

In fact, we fell in love — through email and a series of long phone conversations and occasional dates over several months, but we were slow to introduce each other to our friends, worried about how they would take news of us.

His friends are mostly astronauts, charmingly cheerful guys, who seem to be straining to seem like ordinary guys, when in fact they have done truly extraordinary things: They have left the fucking planet; they have orbited the earth. When they hear that I am a writer, they are kindly enthusiastic and look up my work online. Then, one by one, the men come to my fiancé and say, with evident concern, “Do you know that she’s a lesbian?” “Yup,” he says. “I know.” Their wives are a little less friendly after that, but they are scrupulously polite.

My cosmopolitan, artist friends are no less shocked. “Wow, when a lesbian falls off the wagon, she really falls off the wagon,” my friend Deirdre says. She was raised in Beirut, has lived and taught all over the world with her Japanese-American husband. But she is clearly a little shocked by our decision to marry. (“We want to get a divorce,” she says of the husband she adores, “so we can go back to being lovers.” They married for the sake of immigration ease but object on principle to the state’s interference in private lives).

Deirdre affectionately calls my fiancé Hem, short for Hemingway, because he is tall and built and owns a rifle and has hunted lion in Africa and has climbed most of the big mountains in the world and builds rockets for a living and a hobby. He is a sort of Freudian projection of a man, and I am a lesbian.

So why does the label matter? Why care about terms?

Because I learned long ago that it corrodes a life to lie about who you are.

I know plenty of people who identify as bisexual; I am not. The term simply doesn’t apply. I am not, as a rule, attracted to men. I simply fell in love with this person and didn’t hold his gender against him. That won’t change because of our vows, any more than my eye color will. My fundamental coordinates are unaltered.

Episcopal Bishop Gene Robinson of New Hampshire explains it better than I can: He scoffs at the idea that the Church of England may consecrate gay priests as long as they’re celibate, not actively gay. “At what point is it gay?” he asks. Are two men holding hands gay? What about two men sharing a bedroom with twin beds?

His point is that it is absurd to imagine a demarcation point for gayness — because it misunderstands the nature of being gay or lesbian.

“Gay is not something we do,” Robinson says, “it’s something we are.” It is not about whether you “practice” (though that makes perfect!), or whether you have a partner, or what you do with that partner, or even that partner’s gender (as any gay person trapped in a het marriage knows). It is about who you are, how you experience the world, the eyes you look through, the skin you’re in.

Queer people have understood this for years: For many of us, long before we “came out” as gay or lesbian or bisexual or transgender, long before we had a partner to mirror back to us love and chosen identity, we had to choose ourselves. We had to consciously decide who we were and embrace it, aware that we experienced the world in a manner often at odds with the dominant culture, our lives informed by desires different from what we’re told ours should be. That doesn’t change because a partner does.

It’s the difference between a life judged by external versus internal criteria: Who I am internally has not changed, any more than it would have if I had married a woman. What matters are the eyes we see through, not how we are seen.

It isn’t easy coming out, as sad stats on queer-teen suicide and anti-gay violence attest. I tried to avoid coming out for years before realizing I’d not survive; coming out was coming into myself. To pretend I’m straight or bi- would be a lie against who I’ve been, and am.

There are plenty of compromises one must make in a relationship, but compromising who you are fundamentally is not one of them. For me, that’s non-negotiable. Love changes us, but when it’s good, it makes us more fully who we are, not less; it challenges expectations, disburdens us of constraints, to reveal a love that dares speak its name even if it is hard to sum up.

I’ve been changed by this love: I am calmer, fatter, pregnant. But my fundamental coordinates have not changed. It is precisely because our love makes room for us to be who we are, rather than cutting us to fit convention, that I want to spend my life with him, as I’ll affirm when we stand before the rabbi and say, I do.