Thank god "The Bachelorette" is finally talking about sex

Now that a contestant has revealed that he and Andi "made love," maybe the show can stop playing the prude at last 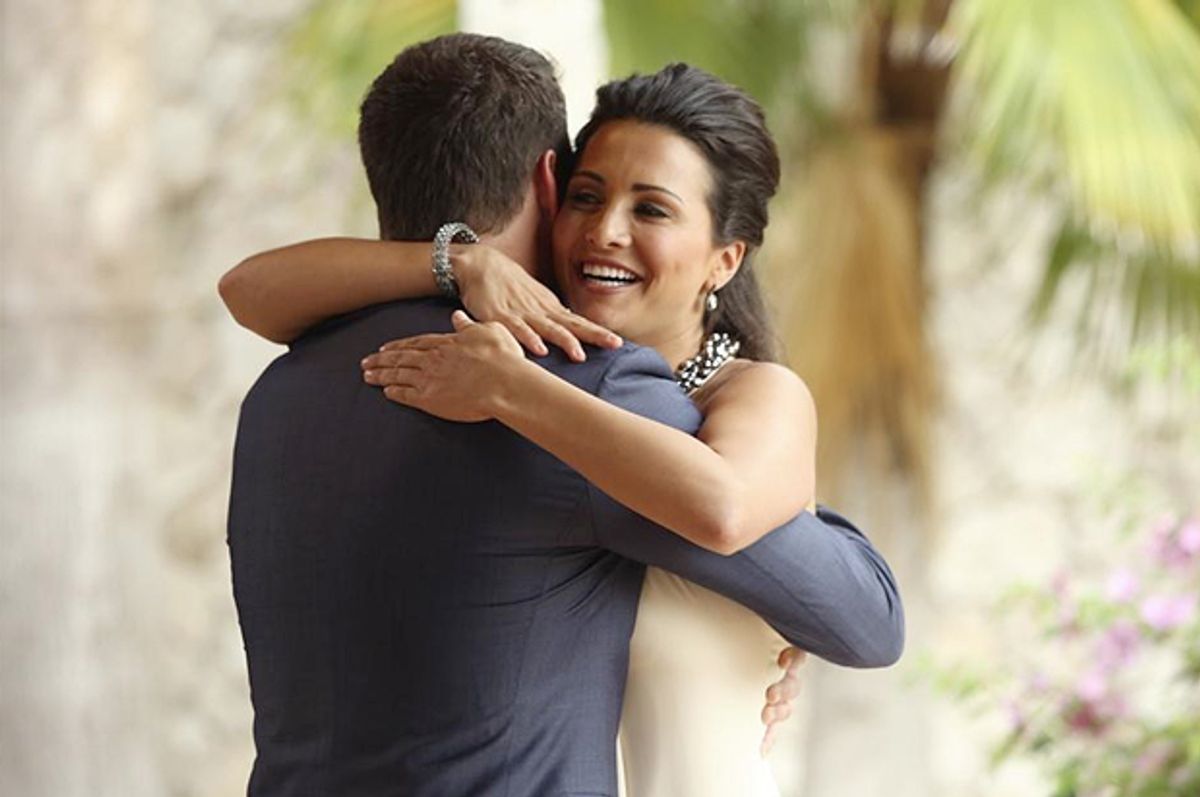 Andi Dorfman and Chris Harrison in "The Bachelorette" (ABC/Javier Pesquera)
--

With a panicked sense of urgency, I turned to my friends and asked, "What did he just say?" I genuinely could not compute the words. There was no way the losing "Bachelorette" finalist had actually announced on live television that he had boned the lady of the hour. Sex isn't directly discussed on "The Bachelor." That is a rule written in stone, isn't it? When my friends confirmed that I was not having an auditory hallucination, I threw my hands over my head and yelled, "HOLY SHIT!"

For those who weren't watching this historic television moment -- and I'm only being a little bit sarcastic -- a recap: In last night's finale, bachelorette Andi Dorfman rejected finalist Nick Viall, aka the Guy With Serial Killer Eyes, in favor of beefy baseballer Josh Murray. On the live after-show, Nick got a chance to confront Andi. As is usual among rejected finalists, he felt misled. Had he imagined that she reciprocated his feelings? Why, then, when he first told her he loved her, had she responded, "I wish I could say things back" (the bachelorette isn't allowed to return "I love you's"). Why had she told him he had nothing to worry about, that he should be confident going into the final round? These were understandable questions, the same ones viewers were asking at home, thanks in large part to a sly effort on the part of producers to portray Nick as the obvious winner in the interest of a shocking plot twist.

But then host Chris Harrison asked Andi whether she had ever loved Nick and she responded in the negative. That's when he responded, "It's hard to hear that. If you weren't in love with me, I'm just not sure why you made love to me." The studio audience is visibly stunned. "First of all, that’s below the belt, something that should be private and kept private,” Andi fired back. "The things I did with you, said to you, the way I kissed you, the way I looked at you — those things were real." She was referring to their camera-free night in the "fantasy suite," an invitation the bachelorette can give to any of her final three. Nick responded, "I didn’t have any expectations of that night, but that night ... that was, like, fiancée-type of stuff. That night meant so much to me. It meant the world to me."

It's no surprise that Harrison didn't follow up on Nick's admission, even though it was the most stunning moment of the entire three-hour-long finale, and even though "The Bachelorette" franchise will typically turn even a sneeze into high drama. Sex is different. It is rarely ever talked about, and even when it is talked about, it's only in the vaguest terms -- so much so that you're not even really sure that they're talking about sex. Case in point, the last season of "The Bachelor," in which Juan Pablo and Clare fooled around in the ocean. Afterward, in what has rightly been criticized as a moment of slut-shaming, he tells Clare, "Maybe it wasn’t right. I have a daughter, I don’t want her to see what happens, if she sees it." What was this "it"? Viewers can choose to believe whatever they want -- maybe it was just a passionate make-out! A hint is offered when Clare gives a toast the next day: "To finding love, being loved, and making love." (Although, at the end of the season, Clare reveals on-camera that on their final date he whispered to her, "I love [bleep]-ing you." Still, who knows for sure what the bleep was!) As Slate's Willa Paskin wrote in response to this particular scene, "'The Bachelor' plays the prude, only ever speaking of sex in the most coded, vague terms, like a pimp who blushes at the word 'vagina' and claims his clientele are just playing cards."

It isn't unusual to have "fantasy suite" overnights with multiple finalists. Juan Pablo extended the invite to all three contestants. On last season's "Bachelorette," Desiree Hartsock had "fantasy suite" overnights with two contestants. Before that, Emily Maynard declined to give out any fantasy suite cards, because she wanted to be a good role model for her daughter, or something, but that was a rarity. What never happens is any explicit talk about the maybe-possibly-could-it-be sex -- until now. And I have to say: What a relief. The franchise has for so long awkwardly straddled two worlds: the classic Cinderella fairy tale, complete with roses, Neil Lane bling and talk of forever, and the boozy, bikini'd alternate universe of reality-TV promiscuity. On last night's live after-show, "The Bachelorette" finally, ever-so-briefly allowed for the acknowledgment of how people really date, find romance and decide on whom to marry these days: They sleep together. I say, here's to fewer euphemisms! After all, a show that relies on sex appeal should be able to talk about actual sex.