David Brooks and Ruth Marcus are mind-numbingly wrong about marijuana

The pundits continue to spew outdated, inaccurate bromides against a drug they admit they themselves have used 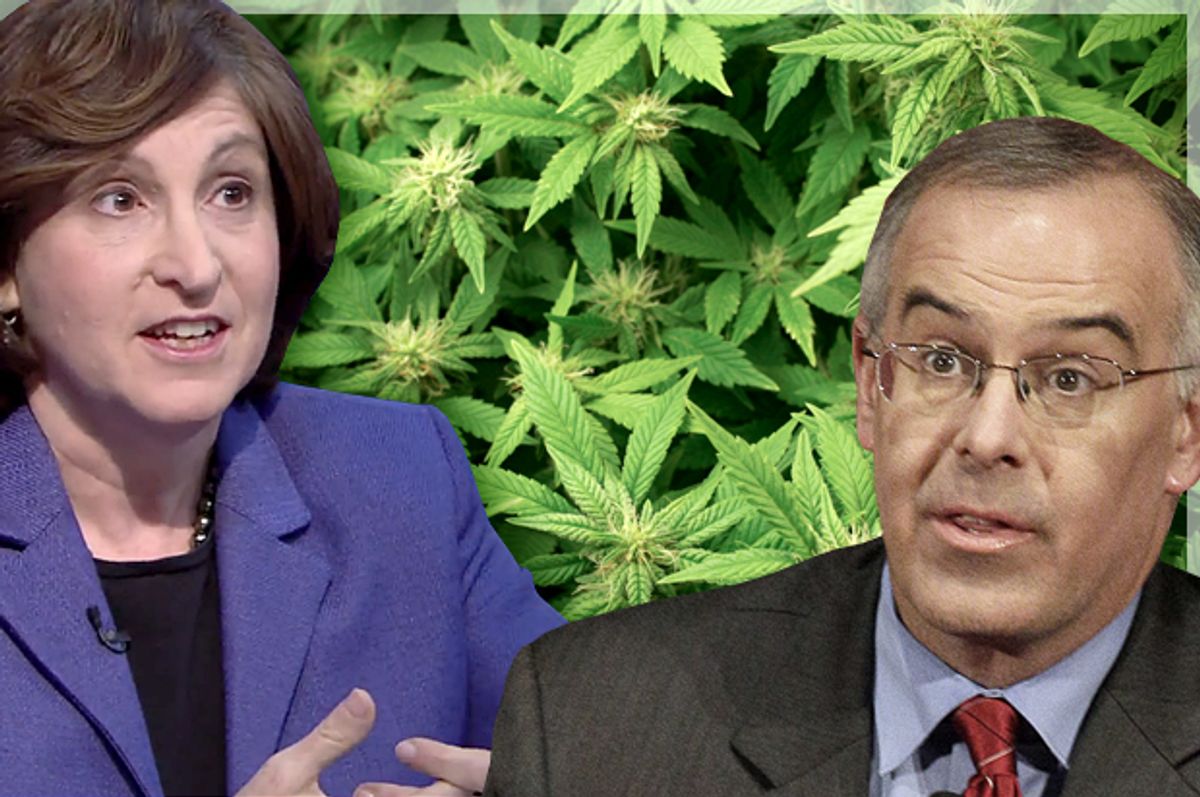 The tag team of David Brooks and Ruth Marcus reunited this past weekend to share their very special insights on the scourge of the demon weed. This was in light of the New York Times endorsement of marijuana legalization the subject of which inevitably turns these two into a couple of  aunties tittering over a glass of sherry before they remember they're supposed to be scolding everyone else for their intemperance.

You'll recall that last January, as the Colorado legalization took effect, both Marcus and Brooks wrote screeds denouncing the nasty practice after admitting that they too had partaken of the devil's temptation themselves with apparently little effect.  Brooks famously opened his piece with this fond recollection:

For a little while in my teenage years, my friends and I smoked marijuana. It was fun. I have some fond memories of us all being silly together. I think those moments of uninhibited frolic deepened our friendships.

Then he warned everyone that it's a very, very bad thing to do, and unless you want to end up a wealthy newspaper columnist someday, you should never touch the stuff.

Marcus, meanwhile, clutched her pearls over the inevitable brain damage --- after admitting that she also had passed a joint or two in her time:

Stephen Colbert, for his part, agreed with Brooks' and Marcus' perspectives:

Well said! Kids don't need another mind-altering substance. It'll screw with their Adderal. And like her friend David Brooks, Marcus admits to being more than just friends with her roommate Mary Jane, saying "I have done my share of inhaling. Next time I'm out in Colorado, I expect I'll check out some Bubba Kush, why not?"

Why not? Other than the column you just wrote? I applaud Marcus and Brooks for taking a firm stand against legalizing the pot they smoked. I assume they're going to turn themselves into the police now and serve their time. Hopefully that will keep them from ever smoking again. Because they might get high and write something really confusing.

One would have thought that would have put a kibosh on their involvement with this issue, if nothing else out of sheer embarrassment. But it didn't. Here they are giggling behind their hands on Meet the Press this past Sunday:

Brooks: I disagree with [the New York Times editorial board] on the larger issue. I don't know what they've been smoking up there in the office. The haze is... (hearty laughter all around.)

There's a fresh joke for you! And at Judy Woodruff's insistence that she thinks it's important to have the debate, just not now -- "what's the rush?" she asked -- Marcus quickly interrupted to exclaim, "No pun intended..." to which the panel exploded in laughter. In fact, they were all chuckling and giggling at their stale humor so much one can only assume that someone put a pinch of Maui Wowie in the Green Room's bagel schmear.

And yes, Judy Woodruff seriously seems to think that the issue of pot legalization sprang up out of nowhere and hasn't been adequately debated in American society. But then she would. After all, she has obviously been living in a cave for the past 40 years. Her hilarious contribution to the discussion was, "When I think of grass, I think of something to walk on. I think of pot as something you put a plant in."

But when all was said and done, it was Ruth Marcus who made the funniest joke of all:

It is a vast social experiment. We do not know the outcome ...

First, like Woodruff, Marcus doesn't seem to acknowledge, despite having smoked pot herself and saying she might very well smoke it again, that we have already have had a vast social experiment with marijuana, spanning over forty years, in which tens of millions of people have used it both recreationally and medically. Gallup has been tracking this usage for over four decades:

Gallup's trend by age reveals that widespread experimentation with marijuana first occurred among adults aged 18 to 29 between 1969 and 1973, rising from 8% to 35%. It then continued to mount, reaching 56% by 1977, and remained at that level in 1985. Since then, however, marijuana use among young adults has progressively declined. At the same time, as the bulge of young adults who tried marijuana in the 1970s ages and replaces older Americans who never tried it, the rate of all Americans who have ever tried the drug has increased slightly.

That's a pretty vast social experiment. Nearly 40 percent of American admit to having used marijuana, including a majority of Marcus' generation of late baby boomers. (And yes, one can make a Brooksian joke about how that explains why the boomers are such losers, but the fact is that a very large number of Americans living today have experience with this drug.) Judy Woodruff may be among those few who are unaware of this decades-long experiment, but it has been ongoing and includes a humongous sample size. If there are long term deleterious effects, one would have thought someone would have noticed it by now.

And yet, Ruth Marcus persists in making this claim, as part of what she calls her "mommy" concerns: "The best evidence is that if you use marijuana as a teenager regularly, [you'll lose] eight IQ points…and I don't know about the rest of the table, but I don't have eight to lose."

That "best evidence" she cites turns out to be one highly flawed study from New Zealand. And it turns out that they failed to take into account socio-economic status among a number of other things, which, if used in place of the marijuana use, would produce the same results. Even if the effect that Marcus purports is true, the scope of this alleged IQ reduction is highly improbable. (And there are other studies out there which saw no correlation at all with IQ.) The findings, therefore, are in dispute and at the very least probably shouldn't be used as "the best evidence" by national pundits, as if they have been indisputably proven.

The truth is that marijuana hasn't been formally studied much at all. And it's always possible that there's a smoking gun out there that will prove it causes brain damage or some lethal disease in ways it has not up until now. I don't think anyone believes it should not be studied, but a big part of the problem with doing good studies on the potential benefits and harm has been the fact that it's illegal. According to this article in The Wire, this is mostly due to the absurd classification of pot as a Schedule I drug -- the same rating as heroin -- which means it has "no acceptable medical use" and therefore cannot be studied for possible usage.

The good news is that the FDA recently announced that they are going to evaluate marijuana for reclassification, which would be welcome for many reasons. Here is a list of the issues they will investigate in this review:

Its actual or relative potential for abuse

Scientific evidence of its pharmacological effect, if known

Its history and current pattern of abuse

The scope, duration, and significance of abuse

What, if any, risk there is to the public health

Its psychic or physiological dependence liability

No one knows how long this could take, but without the push for legalization, it's unlikely it would be happening at all.  The DEA is adamantly opposed, and it is only public pressure that brought the FDA around to taking a look at these issues at all. In the end it should allow for some real scientific studies that will formally answer some of the questions about the effects of long terms.  In the meantime, we can feel fairly confident that any drug that's been used by 100 million people  over the course of many decades without any obvious ill effects (and some clear benefits) is unlikely to be immediately lethal and therefore, can be legalized without all this hand-wringing. Lord knows the FDA legalizes many other drugs on far less evidence.

Perhaps the FDA could start their study by interviewing all the famous newspaper columnists who've admitted to smoking pot to assess whether it has a long term effect on the human brain. Unfortunately, that small sample would probably skew the results.  The tens of millions of former and current pot smokers in America seem to be far less confused about the issue than they are.