If you like the new TV drama "Manhattan," you'll love this darkly hilarious comic about the atomic bomb 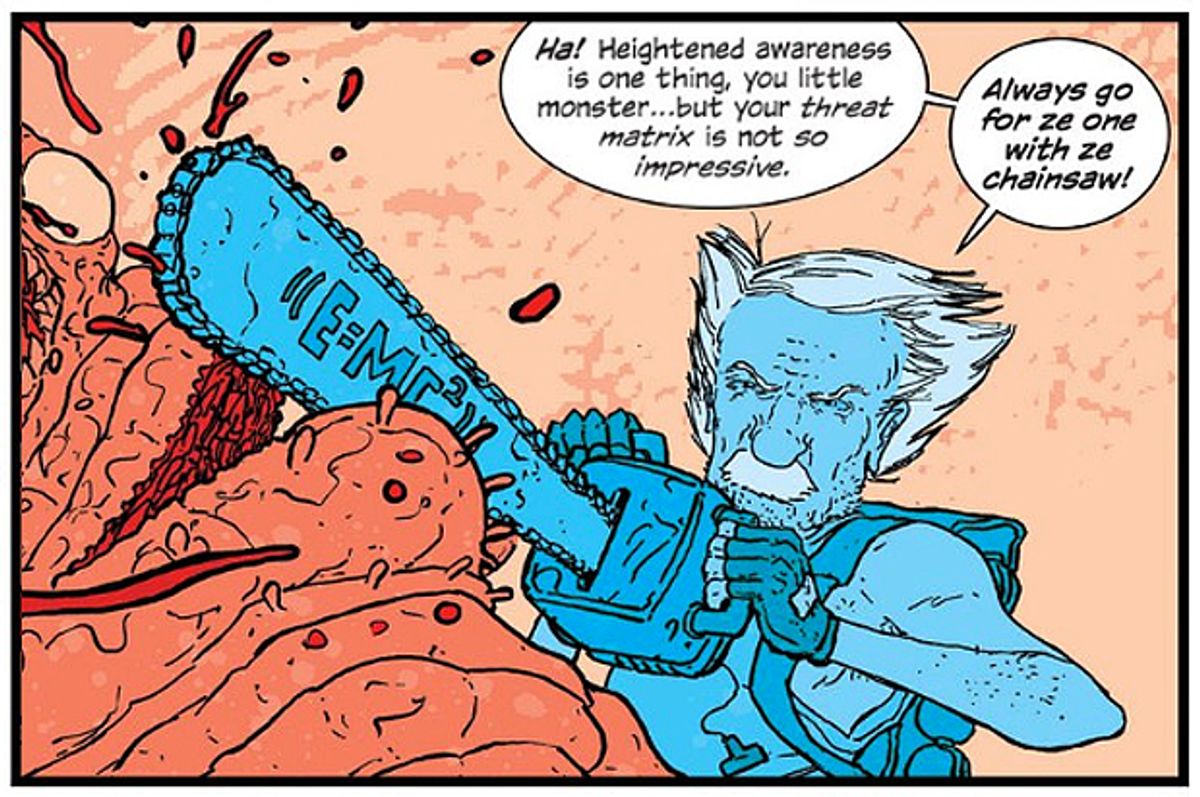 Set in 1943, WGN America's promising new series "Manhattan" follows scientists working to develop the atomic bomb that will eventually end World War II. It’s a compelling premise for a cable landscape enamored of period drama and antiheroes. As I watched lead character Frank Winter (John Benjamin Hickey) work on a faster route to the bomb while navigating office politics and marital deception, and obsessing over a scorpion in a glass, I couldn’t help thinking of Walter White, another obsessive man of science, way out in the desert, doing what he thought he had to do.

While watching “Manhattan,” I also kept thinking of another serial drama: “The Manhattan Projects,” an Image comic written by Jonathan Hickman and illustrated by Nick Pitarra that also uses the reality of the atomic bomb’s development as a jumping-off point. But where “Manhattan” is grounded in reality, “The Manhattan Projects” goes on sci-fi journeys that are bizarre, absurd, colorful and darkly humorous. This series mixes history and secrecy and lunacy into tales that would make a conspiracy theorist blush. It’s also one of the best ongoing series in comics, and you should catch up or jump on the new story arc that starts this week.

The premise of “The Manhattan Projects,” which began in 2012, is simple: What if developing the atomic bomb was the least scary thing going on among this secluded group of scientists? In the first issue, we’re shown Robert Oppenheimer being recruited to the Manhattan Projects by Lt. Gen. Leslie Groves, who tells him, "You and I will be forced to maintain a collective, longer view than the political animals who whore for votes each election cycle.” These “more important concerns” include the atomic bomb, but that’s mainly a cover for creating a thinking computer, recovering “mythological artifacts from discarded space,” meeting with an alien race every 10 years, plundering alternate realities and other examples of extreme science practiced by versions of real-life scientists such as Richard Feynman, Enrico Fermi and Harry Daghlian.

Despite the sci-fi flights of fancy, this is a book extremely informed by history. For example, Daghlian was the victim of a radiation accident in real life, but in the comic he survives as a glowing, disembodied, new life form (who desperately misses ice cream). In fact, characters often have a better fate in the comic, as Laika — the Russian space dog — finds adventures in space rather than a quick death. One character who has a worse time in the comic is Robert Oppenheimer, who is not who he appears to be. Unknown to all but the reader, he has been replaced by his twin brother, Joseph, who is a serial killer and cannibal. This might be the series’ best joke: a cannibal whacko joins America’s most elite group of scientists, and no one notices. He fits right in.

The scientists aren’t the only ones who go to extremes in the world of “The Manhattan Projects.” So far, the series has extended well beyond the end of World War II and featured versions of three presidents, none of whom would likely be flattered. After the death of FDR, his consciousness is implanted into a computer, which often wreaks havoc. Harry Truman is given the news that he will be president while in the midst of an Illuminati-style, orgy-tastic, goat-slaughtering ceremony, the likes of which he soon brings to the White House. John F. Kennedy is portrayed as a mindless cokehead easily manipulated by the clever scientists. To get a sense for how truly bizarre — yet well done — this series is, Hickman and Pitarra occasionally make you feel sympathy for Wernher Von Braun, the Nazi rocket scientist recruited after the war. His monomania for space travel is one of the nobler intentions in the series. It’s a pretty odd series when the former Nazi is one of the least kill-happy characters.

Nick Pitarra’s art brings all of the above to life with subtlety and energy. Pitarra’s clean lines remind me a little of Frank Quitely, but Pitarra’s work on this series is its own beast, full of humor and a sense of wonder that’s appropriate to the subject matter. His faces are very realistic looking, but the overall art has a mix of realism and cartoonishness that’s distinctive and effective. Huge credit must go to Jordie Bellaire, who just won the Eisner Award for coloring. Few pages of the series are colored realistically, and the colors are used to create moods, distinguish characters or reference story lines. The series’ most distinctive, yet simple, color palette is red for Joseph Oppenheimer, blue for Robert. Telling the story of their physical (and then mental) battles in only these colors works like a movie soundtrack and reinforces the weirdness of the events. Rus Wotton’s lettering is also distinctive without being distracting: He enhances the story, much like all-time-great letterer John Workman.

Even the fill-in issues of the series are terrific, and I generally hate fill-in issues more than Spider-Man hates being called a webbed menace. Fill-in issues — featuring a different artist, so the main artist can catch up or take a breath — tend to be awful, and Marvel and DC often seem to assign replacements with no regard for the story or readers. But on “The Manhattan Projects,” the issues illustrated by Ryan Browne appropriately explore a different part of the story: mostly, the mental landscapes of Joseph Oppenheimer. In the world of his brain, all the folks he’s munched (including an alien) exist and multiply. They take sides with either Joseph or Robert, as the reds and blues fight the Oppenheimer Civil War inside his brain. Yes, entire issues depict a war inside Joseph Oppenheimer’s brain, and they are glorious. Browne is a born humorist (check out his “God Hates Astronauts” and “Blast Furnace”) who is perfectly suited to these shenanigans.

So far, Oppenheimer is the only character in common between “Manhattan” and “The Manhattan Projects,” but the two series have something else in common: Both stay true to the real dilemma of using science to build terrible things for the greater good. In the TV series, the scientists are trying to build the bomb to shorten the war and save America (and the world) from the Axis powers. In the comic, they’re trying to build all sorts of gadgets to save the world (and America) from aliens. Despite the ridiculousness, the comic has a lot to say about science, hubris and ethics.

Plus, there’s an alternate reality version of Albert Einstein slaughtering aliens with a chainsaw. How could you pass that up?