"Sharknado" director: I kept yelling "Shark!" to keep up our energy on set

"Sharknado" director Anthony C. Ferrante on cult classics, camp and how his movie is like Taylor Swift 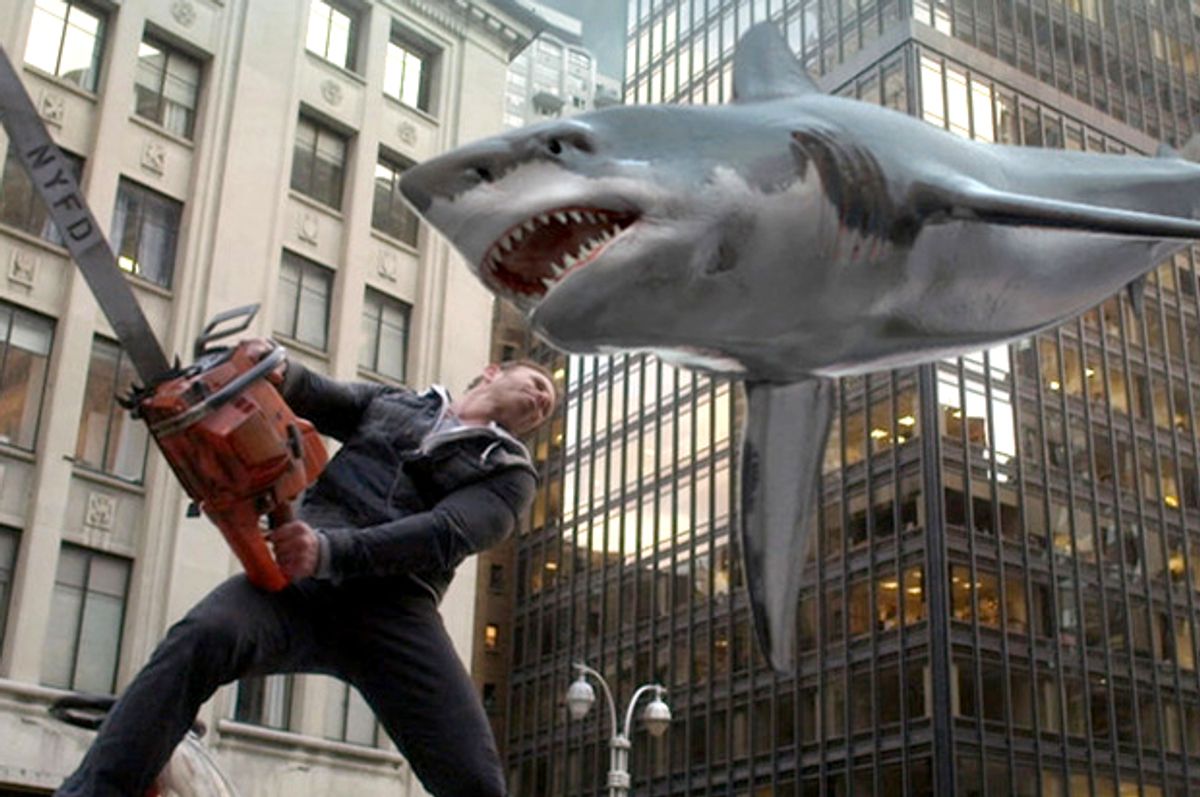 Last summer, "Sharknado" swept through social media like, well, some kind of human-eating meteorological force. The unabashedly ludicrous Syfy TV movie -- a product of The Asylum, a production company famous for "mockbusters" like "Transmorphers" and "Atlantic Ring" -- became a phenomenon online thanks to its wacky plot, its revival of yesteryear stars like Ian Ziering and Tara Reid, and its basic earnestness about the whole concept. Tonight, the franchise returns on Syfy with "Sharknado 2: The Second One." Once again, its only goal is to entertain by any means possible.

Director Anthony C. Ferrante told Salon that the movies don't aim at cult-classic status: "There's a sincerity to it and we try to keep it real with the characters." (He later compared the film, in its use of narrative structure and mix of tones, to "Die Hard.") Aiming for camp, after all, is a sure way to miss the mark -- Ferrante urges his cast to play it as straight as possible as they dodge the storm of sea life coming their way. While many on Twitter were mocking "Sharknado's" first installment, some were praising the film's mania and its total commitment to its own ideas. That's the audience Ferrante's aiming for.

Ferrante, who now faces the challenge of transitioning from social-media sensation to full-fledged hit, told Salon that he sees a path for himself from "Sharknado" to bigger-budget cinema. But either way, he's gratified by what he's able to do with the very limited cash and time he gets to put together a TV movie. "That's why I like Taylor Swift. You hear her voice crack in her songs, and there's character to that. That's what "Sharknado" is. It wears its limitations on its sleeve and it doesn't care."

With the casting -- from returning cast members Ziering and Reid to newbies like Vivica A. Fox and Mark McGrath -- so heavy on notorious personalities, were you worried at all about the cast's ability to actually act?

I think that all the casting works. Some of the credit goes to the Asylum in-house team -- casting Part 2, there were a couple of instances where they'd say, "It'd be cool to bring this person on, that helps us out." Because you want people who will be P.R. mouthpieces. Ian Ziering and Tara Reid did so much stuff the first time. When you get people who are willing to do that, it helps. The casting on this one was carte blanche -- who do we want to go after? You start with a huge list of people and say, Let's get Henry Winkler, because he could jump the shark; let's get William Shatner, all these crazy things within the Sharknado brand. Any celeb will have 100-day windows, but we have an 18-day shoot. Arnold Schwarzenegger would be great, and on a 100-day shoot, we could get him on day 70.

More and more as we were shooting, we would get calls. I knew I wanted Judah Friedlander, we knew Kelly Osbourne wanted to be in the movie, Ian knew Matt wanted to be in the movie. Some people come on set and they're not known as actors, but you work with them. You try to get cool stuff out of them. When people came onto the movie, their perception was it was all camp and you're going to ham it up. I had to have a lot of conversations, saying, "All of this has to be played straight. If you play it funny, it has to be funny within a context. If you're too off the reservation, you'll be cut out of the movie." Ian Ziering has funny lines, but it's character-driven. We have a few winking-at-the-camera moments, but even with ["Airplane!" actor] Robert Hays, who I really wanted and was shocked we got, we had to dial it back even more to get a reaction. There's a knowingness there, but it's real within the moment.

It seems like aiming for camp is a bad strategy.

It's intentionally fun, we set out to make a fun movie, but when you put a sharknado in the film, it's a ridiculous concept we do with sincerity. We could name a list of cult classics from the past 30 or 40 years where everyone was in on the joke. "Sharknado" is a weird thing, because we were intentionally making a big-budget movie with no money. The rough edges work, but there's stuff that sincerely works. There's enough pieces that you don't see in the low-budget movies. A friend said it's a movie that doesn't know it can't do that. There's a sincerity to it and we try to keep it real with the characters.

Ian tearing his way out of the shark at the end of the first movie gave us the right to be crazier, and we asked ourselves: What do we want to do with New York? And from the first moments, we say this is what it is, a shark's going to land on a plane, and it becomes a 1970s airport movie. The Statue of Liberty attack -- my idea was that the Statue of Liberty got decapitated by a storm, and two guys in garbage trucks play a game of pong with it. One guy would hit it and another would divert it. We had two hours to shoot this sequence and we only had one truck. In my head, I didn't get to do what I wanted to do, but I'm proud of the compromise -- and the sequence has no sharks and no weather in it. You never know what's going to get picked up, it's all up to people watching it. To me, camp is "The Rocky Horror Picture Show"; while we're garish and proud of what we're doing in its ridiculousness, I think "Sharknado" is in the middle -- it almost goes over that edge but then it doesn't.

Does it bother you to have to make compromises around the budget?

What we came up with was it's not going to hinder me from trying to deliver something for the audience as well. This is a low-budget movie. But if someone gives me a movie like "Sharknado," it feels like a kid in a toy store. Filming in New York, I had all these thoughts: We have to get a baseball thing, but Major League Baseball won't allow it. We have to shoot in Times Square. The city gave us right here in the heart of Times Square but said, "You get two hours and you get a crew of eight and your actors." Most directors would say, We can't do that. Me, I'm like, Let's do this, we can make that work -- I'm not afraid of it! It didn't need Tara and Ian, which was good, we looked like a student film or a low-budget movie. We got away with it without people noticing -- and the main actor was Mark McGrath, the rock singer from Sugar Ray, but he just looked like a dad so we got away with it. We nailed it -- two hours and out.

It was the same thing on the subway; we didn't think we could shoot on a subway in New York. Everyone with the MTA were such nice people, but they saw me and my producer and, compared to the people they usually work with, we were like kids. They said, "There's a closet in Grand Central -- can we give it to you in the middle of the night?" It's exciting to me to play with these toys. When do you get an opportunity to do this stuff? And we're going into system where Gareth Edwards ["Godzilla"] and James Gunn ["Guardians of the Galaxy"], who both started in the low-budget world, get to do big movies.

Yes! I'd love to do that! I thought I was always going to do horror films but then I got the bug with this, to do something that's a big popcorn movie. I've always wanted to make a movie about Moon Knight; he's my favorite Marvel hero. You have to do it to see if you've got the bug. It's liberating to do stuff with digital effects. When you make a movie like "Sharknado," you've got to keep it contained and get that spirit and that look. There's an energy and desperation: We don't have this but we'll make it work.

When I watch the movie, I forget what it was to make it. It may have been shot on two days in sequence, but all I remember is yelling "Shark!" to keep up that energy. People are running and shouting over each other. It's chaos, but it feels right for the film. On a 100 day-shoot, it'd be perfection. But, in a way, it feels right. Pop songs on the radio are AutoTuned and they're boring for that. That's why I like Taylor Swift. You hear her voice crack in her songs, and there's character to that. That's what "Sharknado" is. It wears its limitations on its sleeve and it doesn't care.

Do you think there's a limit to the number of such films Syfy can make, or that you'd want to be involved in?

At a certain point, if you're doing the same thing, you're going to get bored, but we had New York this time, and I was excited. We keep coming up with new ideas, which is cool, even though no one is signed for a third film yet. I have my scripts I want to do, but other ideas can inspire me -- when I did "Hansel and Gretel" for Asylum I had a serious issue, because I don't like torture porn and I kept working with the writer and found a way in by making it about a magical realm. I knew "Sharknado" would be great, but we came up with it three or four years ago and pitched it around and no one took it. I ended up referencing it in another script I did for Syfy and they wanted it then. No one quite got it at first, but I always knew there was magic about it. The moment you stop believing in it is the moment to get out. If they ask me to do Part 3, I do think there's more story to tell.

The moment it becomes a collage of set pieces is the moment it's not going to work. There needs to be a narrative. Look at the first "Die Hard" -- it's funny, but people die and it's serious, and there's terrorists. But they did it, they mixed it all together and people love it.