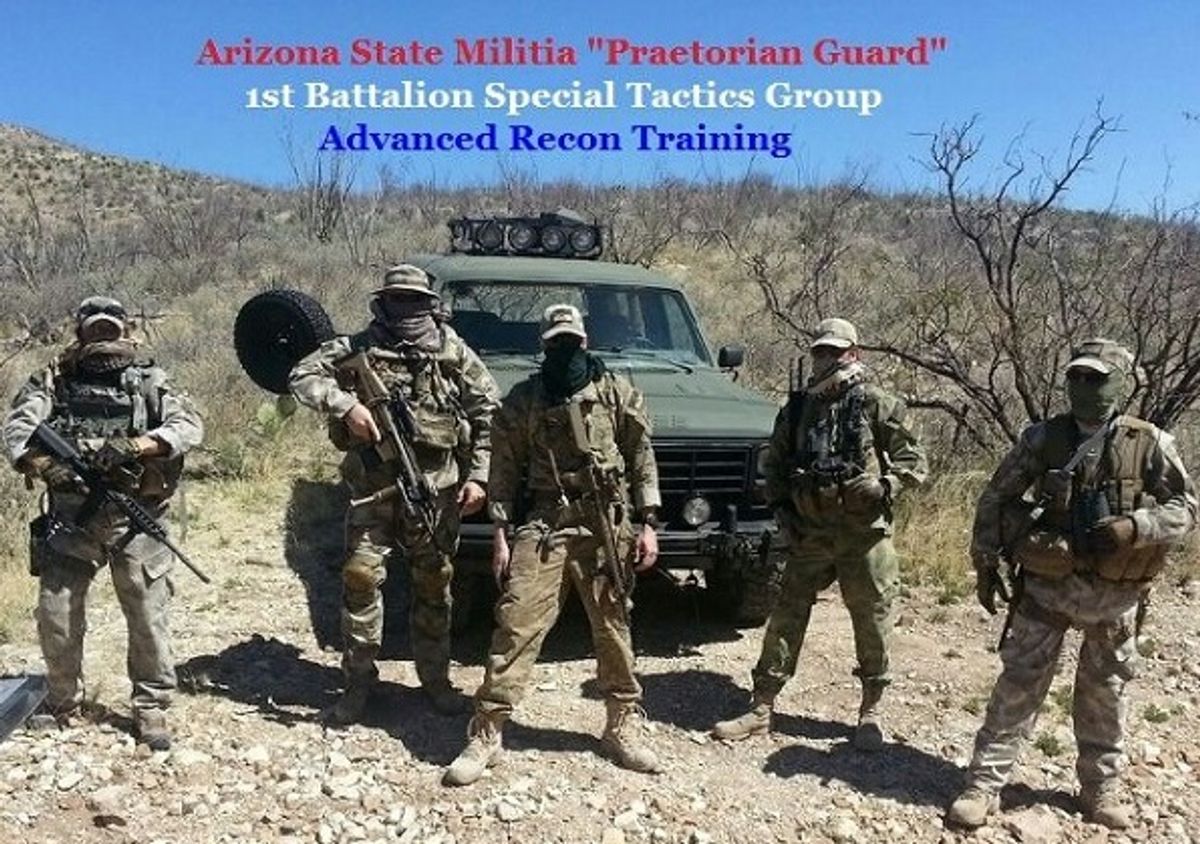 A new “statewide” militia group that is attempting to organize in Arizona has been careful to portray itself to would-be recruits and law enforcement as a non-radical, mainstream organization that cooperates with local authorities. Calling itself the Arizona State Militia (ASM), the group claims to have successfully recruited a number of veterans of the U.S. military.

But as with similar efforts in Idaho and elsewhere, if you scrape a bit at the façade, the same old antigovernment paranoia and conspiracy theories are lurking in plain view.

No one from the group responded to requests for comment from Hatewatch.

The militia made headlines when it appeared at a recent anti-immigrant demonstration in Arizona. None of the militiamen spoke on camera, but they were described by others as providing “security” for politicians and public figures who appeared at the demonstration.

ASM insists that all of its members must undergo a background check before they are admitted. This is a claim we’ve heard from militia and related groups in the past, notably the Minuteman Project. It often later emerged that their background check process was deeply flawed and their ranks were filled with people with long criminal records (in the case of the Minutemen, the most notorious example was onetime leader Shawna Forde).

ASM has a code of conduct and sworn oath for its members that includes a ban on “illegal activity” and “racism or discrimination based on race, sex, or ethnicity” (evidently, a bias based on sexual orientation is still permissible). Most of all the militia insists that it is not an “anti-government group” but rather hopes to work cooperatively with local authorities.

“We are not here to over-throw or restructure the government,” ASM’s website proclaims. It continues:

As Arizona State’s premier group of law-abiding, Constitutional Patriots- living, working, and training throughout the state; we strive to improve our community and to help our members hone and sharpen their defensive skills. We will use these skills to help our local communities in cases of emergency, natural disaster, or war. We pride ourselves on the fact we are an open group accepting all races and genders with open arms. In life as well as the fight for freedom we are all equal are we not?

The group made a stab at establishing their community bona fides in May by taking part in a home building project with Habitat for Humanity of Central Arizona, posting pictures and text about it at their blog. ASM claimed that “they invited us to join the build” and said they’d be involved in a June build and promised to post photos. So far, those have not appeared on the website.

ASM also hopes to establish its bona fides with testimonials on its website from military veterans who have supposedly joined the militia, some of whom say they are combat veterans. (Of course, since the organization insists on anonymity, these claims are impossible to check out.)

In September of last year, TV station KPHO in Phoenix ran an investigative report from a correspondent who went undercover to an ASM meeting and found that its recruiters were offering advice to veterans and military contractors about how to get around military prohibitions against militia involvement.

As the KPHO report noted, Arizonans have reason to be suspicious of anyone calling themselves a militiaman and setting out to patrol the American border, since the state has been home to a number of criminal cases arising from the activities of so-called border watchers, including Forde’s horrific murders. More recently, Minuteman cofounder Chris Simcox was arrested and currently awaits trial on three counts of child molestation.

“Colonel Kratos” told an interviewer from a Montana-based, antigovernment Patriot radio show that he believes a lot of militias have gone astray after becoming distracted by what he called “side issues.”

“It defines a lot of them when they get involved with things they really shouldn’t get involved in,” he told the interviewer. “And it becomes a mindset. The individuals that run this organization have the mindset that we are a strict constitutional militia. When you allow personal opinions or personal things to get in the way of the bigger picture, it creates havoc for any organization.”

“And what we don’t allow in our organization is power struggles,” he continued. “We all understand what our role is. It isn’t about any one of us. It’s about the organization as a whole, and the community and the state.”

He advised people looking to join a militia to avoid any organization that describes itself as radical or involved with fringe concerns. “If they’re involved with positive community things that help those communities, and they’re staying out of those social issues and they’re not portraying themselves as an antigovernment organization, one that is simply there to exert their belief in the Constitution and the state’s rights, that’s somebody you want to take a serious look at,” he said.

Despite these claims, it’s clear that ASM is fueled in no small part by the paranoid conspiracy theories that help fuel the broader militia and Patriot movements, including a belief in an overwhelming “New World Order” plot to enslave Americans. This is referenced in several places on the militia’s website.

Likewise, ASM’s Code of Conduct, rather than offering a reassuring explanation that all militiamen will be civic-minded in their approach to their duties, instead focuses – at least in the first half – on how the militiamen should behave if captured by their enemies: “I will evade answering further questions to the utmost of my ability. I will not make any oral or written statements disloyal to my beloved state and its citizens, or harmful to their continued struggle for liberty and freedom as prescribed in the constitutions of Arizona and the United States.”

The second half of the Code, as it happens, is a nearly verbatim recitation of the Ten Orders We Will Not Obey that form the heart of the credo of the Oath Keepers, another Patriot organization that revels in conspiracies and paranoia, and whose radical ideology was on display at the Bundy Ranch standoff in Nevada this spring.

ASM appears to be just another radical antigovernment group in the vein of the many militia and Patriot groups that have come and gone before them.