The so-called GOP wonks claim to be enemies of corporate shenanigans. Read a little closer and the truth comes out 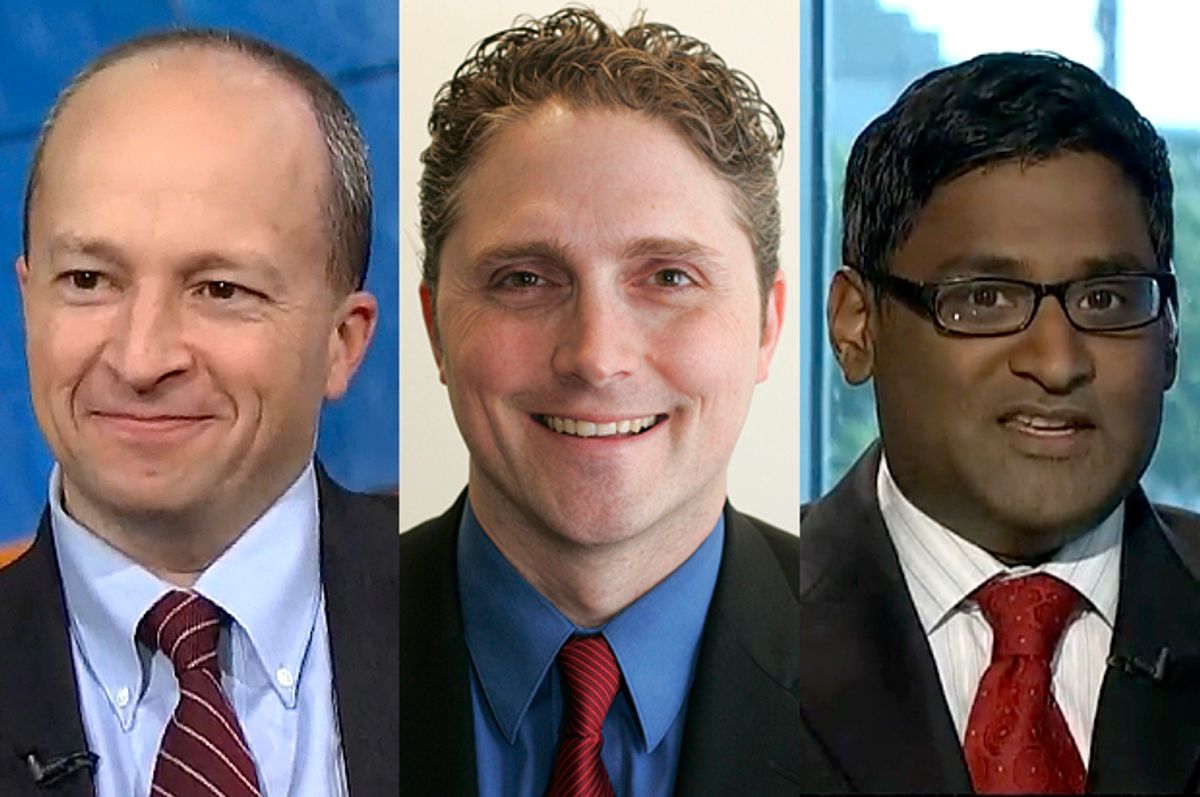 The so-called reformicons — a group of Republican policy wonks — have received a lot of attention recently, thanks to a New York Times essay by Sam Tanenhaus and an essay in the Atlantic by E. J. Dionne.  Writing in Vox, Ezra Klein suggested that, like the Tea Party conservatives, reformicons are sincere enemies of “crony capitalism” — that is, government favoritism toward big corporations or whole industries, of the kind that is supposed to be symbolized by the Eximbank and the TARP bailout of financial firms. Klein writes:

[Yuval] Levin presents reform conservatism as similarly motivated, but operationally orthogonal, to the Tea Party. Like the Tea Party, he says reform conservatism is "a response to the fat and happy, big-business-oriented, go along to get along, aimless centrism of too much of the Republican party over the past decade, which has been perfectly happy to argue about the cost (if that!) of our government, rather than about its purpose and structure, provided its own friends got a piece of the action."

…. This is key to why the fight against "crony capitalism' has become so important to reform conservatives: many business interests profit from current government policies, and so a necessary predicate of reform conservatism is for conservatives to get comfortable fighting big businesses that partner with the state.

The reformicons have some good ideas that progressives and centrists could endorse, such as an expanded child tax credit.  But the idea that the reformicons oppose crony capitalism is nonsense.  I know, because I’ve read their manifesto, "Room to Grow."  With the exception of the chapters on family policy and the Constitution, practically every essay in the anthology proposes some new or expanded government subsidy or regulatory favor to for-profit businesses — most of them low-productivity or low-wage businesses that add little or nothing to the productive economic base of the United States.

In the chapter titled “Health Care Reform to Lower Costs and Improve Access and Quality,” author James Capretta writes:  “A model for these reforms can be found in the Medicare Part D Program, a real marketplace that has restrained cost growth while also yielding high levels of choice and satisfaction for seniors.” (page 27).

Medicare Part D is crony capitalism at its croniest.  The program provides a huge windfall to pharma companies, according to the Los Angeles Times:

WASHINGTON — U.S. drug manufacturers are reaping a windfall from taxpayers because Medicare's privately administered prescription drug benefit program pays more than other government programs for the same medicines, a House committee charged in a report Thursday.

The House Committee on Oversight and Government Reform found that taxpayers are paying up to 30% more for prescription drugs under Medicare's privatized Part D program for seniors and the disabled than under the government's Medicaid program for the poor.

Other developed nations achieve similar health results while spending far less on drugs, hospitals and physician fees than the U.S. and achieve high-quality, low-cost healthcare by means of government price negotiations with medical providers or “all payer regulation.”  Not here.  In one of the crudest examples of the power of special-interest lobbies in the last generation, in 2003 conservatives in Congress pushed through a law banning the federal government from negotiating lower prices for Medicare Part D, to the benefit of the pharma industry.

In its 2014 budget, the Obama administration noted: "The Department of Health and Human Services Office of Inspector General has found substantial differences in rebate amounts and net prices paid for brand name drugs under Medicare and Medicaid, with Medicare receiving significantly lower rebates and paying higher prices than Medicaid — even for Medicaid beneficiaries also enrolled in Medicare.”  According to the Office of Management and Budget, a proposal backed by the Obama White House to allow low-income Medicare Part D beneficiaries to benefit from the same government-negotiated prescription drug rebates that Medicaid recipients receive would save American taxpayers as much as $123 billion in the next 10 years.  There is no mention of that taxpayer-friendly, anti-crony-capitalist proposal in "Room to Grow."

Ezra Klein writes:  “There is a certain tension in reform conservatism's attitude towards Medicare Part D, which is both held up as an important policy success and an ideological betrayal.”  But in"Room to Grow," Medicare Part D, that grotesque monument to pharma lobby rent-seeking, is treated as a model of what good legislation looks like.

“Crony capitalist” policies spill out of the pages of "Room to Grow" like advertising inserts from a newsstand magazine.  On page 45, in “K-12 Education:  Reform to Give the Next Generation a Chance to Thrive,” Frederick M. Hess calls for the federal government to use its financial influence over state and local K-12 policy in favor of school choice — including, presumably, taxpayer money, in the form of school vouchers, going to for-profit K-12 education corporations.  The reformicons, like standard-issue conservatives and libertarians, pretend that voucher systems are “market-oriented.”  But this is Orwellian.  The government uses its coercive power to raise taxes from citizens, and then allows citizens to choose from a handful of government-certified contractors providing public services. This is not the free market; it is just a somewhat complicated system of government outsourcing to private contractors.  All voucher systems funded by taxes are, by definition, voucher socialism.

The chapter on higher education by Andrew P. Kelly in "Room to Grow" — “Higher-Education Reform:  To Make College and Career Training More Effective and Affordable” — contains a crony-capitalist proposal to enrich investors.  Kelly calls for the federal government to pass laws benefiting Income Share Agreements (ISA’s) — essentially, a modern form of debt peonage as an alternative to student loans in which students would borrow money from groups of investors in return for giving them a share of their post-graduation income, within limits.  Kelly wants the federal government not only to encourage this new form of profiteering at the expense of students but also to spend public money to “create the data infrastructure necessary to process contracts.” (page 56)

In their chapters on jobs and wages in "Room to Grow," Scott Winship and Michael R. Strain both support government wage subsidies as a way of helping low-wage workers, as an alternative to a higher minimum wage.  But unlike the minimum wage, any wage subsidy, including the existing earned income tax credit, is an indirect government subsidy that allows firms to pay wages that are too low for the workers to survive on. Wage subsidies socialize the cost of low-wage employment while allowing miserly employers to keep the profits. The “reformicons” think that the responsibility for a decent day’s pay for a day’s labor lies not with employers but taxpayers.

In addition to supporting crony-capitalist subsidies, the reformicons who contributed essays to "Room to Grow" sometimes favor crony-capitalist regulations that favor particular industries and businesses, too.  In a chapter on energy, Adam White hesitates but comes down in favor of giving private oil and gas companies the power of eminent domain, to build pipelines. James Pethokoukis, in “Regulatory and Financial Reforms to Combat Cronyism and Modernize Our Economy,” endorses the economist Alex Tabarrok’s pharma-friendly patent law proposal (p. 86):

Tabarrok has argued that patent law should be stronger in business sectors where there are high “innovation-to-imitation costs” such as pharmaceuticals (where the first pill costs a billion dollars and the second fifty cents) and weaker where costs are lower, such as software.  He suggests the following reform:  Patents of, say, three, ten, and twenty years could be offered with the divisions based on industry—with software and business-method patents getting three years, pharmaceutical getting twenty years and others getting ten years.

I imagine K Street lobbyists paid by Big Pharma breathing a sigh of relief on obtaining "Room to Grow" and reading Pethokoukis on pharma patents and Capretta on Medicare Part D.  With enemies like the reformicons, crony capitalists don’t need friends!

Now as a Hamiltonian champion of government-business partnerships, where these enhance the long-term productivity of the U.S. economy, I have no objection to much of what the Tea Party right calls “crony capitalism.”  As long as there is a reasonable tradeoff between incentives to innovate and diffusion of intellectual breakthroughs, patents and copyrights don’t bother me.  Since we don’t have a government energy company the long-established American practice of granting energy and utility companies the limited right of eminent domain for pipelines and power lines is OK by me as well.

But I find it striking that, with the exception of White’s pipelines and the tech and biotech patents mentioned by Pethokoukis, none of the proposals in “Room to Grow” for government subsidies or preferential laws are likely to benefit the productive, globally competitive economy of manufacturing or infrastructure.  On the contrary, most of the industries favored by the reformicon authors of “Room to Grow” are either low-wage industries or rent-seeking FIRE (finance, insurance, real estate) sector industries.

Wage subsidies?  Most low-wage employers are found in the nontraded, labor-intensive domestic service sector, not the highly productive, capital-intensive traded sector.  The reformicon policy of letting more employers pay below-subsistence wages may help McDonald’s but it will have little or no impact on Boeing or Apple.  Income Share Agreements are just another way for rich rentiers to turn low- and middle-income university students into debt serfs sending them part of their pay every month.  School vouchers would funnel taxpayer dollars to for-profit education companies, whose CEOs, it is safe to guess, would make considerably more than your typical school superintendent, while in many cases teachers would make less.

If you think that what America needs is more employers paying below-poverty wages, patent protections for Big Pharma forcing Americans to pay far more for drugs that are cheaper everywhere else in the world, and entirely new classes of parasitic middle-men in the education sector fattening on tax dollars from school vouchers and debt serfdom from college graduates — why, then, the reformicon manifesto "Room to Grow" is the book for you.  But let’s be clear what this alleged reform manifesto is not.  Yuval  Levin to the contrary, it is not “a response to the fat and happy, big-business-oriented, go along to get along, aimless centrism of too much of the Republican party over the past decade, which has been perfectly happy to argue about the cost (if that!) of our government, rather than about its purpose and structure, provided its own friends got a piece of the action."  On the contrary, "Room to Grow" is a crony capitalist wish-list of government policies that would give many firms and investors in the poorest-paying and least productive sectors of the U.S. economy an even bigger “piece of the action.”