Republicans have finally realized that (gasp!) women actually vote. But efforts to court them are dead on arrival 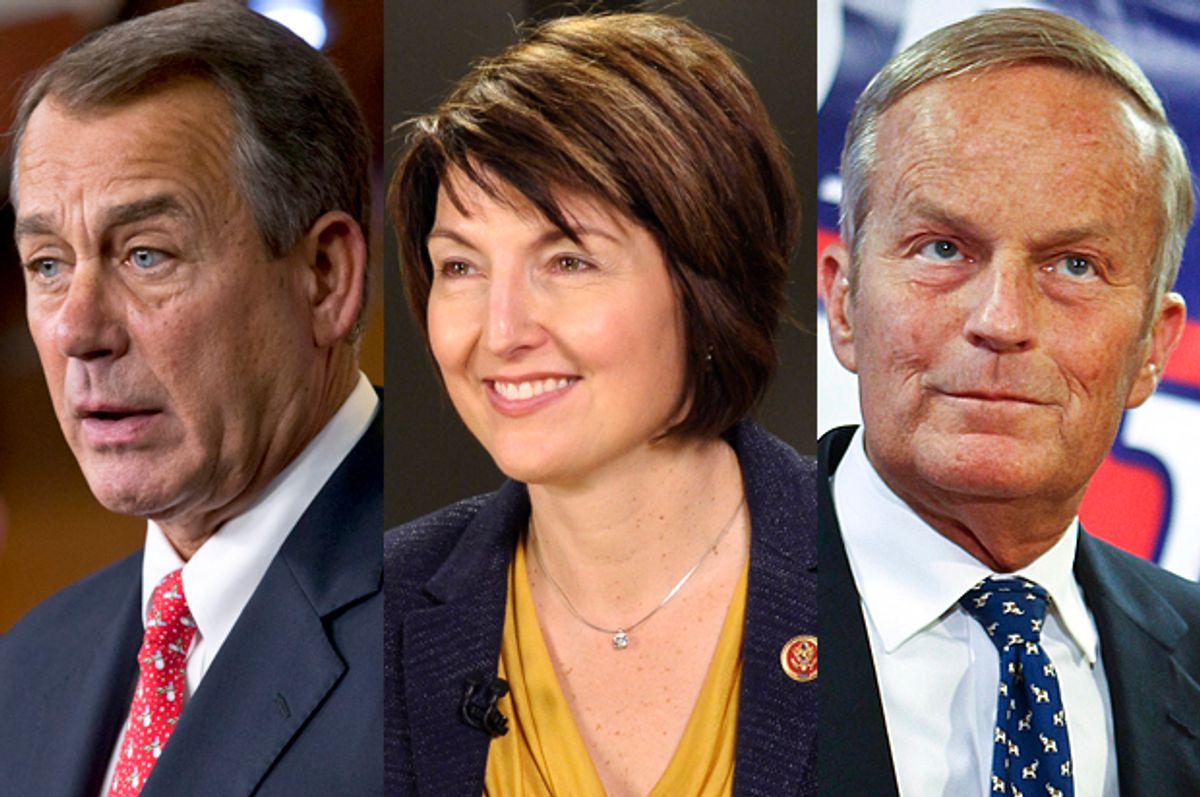 In an exciting new development for American politics, the Republican Party ran some spreadsheets and crunched some numbers and -- lo and behold -- have discovered that women vote. However belated this revelation might be, the GOP is running at this knowledge with everything they have.

Yesterday, high-ranking Republican woman Cathy McMorris Rogers unveiled a bold new campaign to reach out to the half of the population the GOP has been trying to keep broke, barefoot and pregnant. And to prove that they are the party of business and branding, Republicans even came up with a scorching new slogan that's destined to set the meme-world on fire:

"The War for Women."

That's right, they've cleverly declared that they are not, as is widely assumed, waging a war on the fairer sex -- it's actually all for them. So now the GOP is fighting against those who are saying it's a war on women. No wait. It's a war among women, against the people who say they are fighting for them ...?

Well, you get the picture. There's a war. They're fighting it. And it has something to do with women.

And Cathy McMorris Rogers knows exactly how to get that message across:

You betcha! And not just for shoes, either. (But let one run wild in a shopping mall for for an afternoon and they'll mortgage the house and the car, amirite?)

Anyway, women are working and they are making money and they are buying things. Which means that something has changed since 1953 when Cathy McMorris Rogers was put into the cryogenic chamber from which she apparently emerged just this week. After all, this is hardly a recent phenomenon. Women have been flooding into the workforce for the past 40 years.

Perhaps Cathy McMorris Rogers should read up a little bit to see why that happened. Certainly, it became economically necessary because wages stagnated and a man's salary was no longer enough to support a family. It's fairly certain that we can look to conservative economic policies for much of the reason there. Killing off unions, offshoring high-paying blue-collar jobs, generally tilting the field sharply to the advantage of the employer are among their proudest accomplishments. But there are other reasons why women came into the workforce in great numbers and are now primary income earners in half of all households. According to the National Bureau of Economic Research, "government mandates outlawing discrimination against women in hiring and higher education" had a huge effect, as did the change in attitudes in society at large, thanks in large part to the feminist and civil rights movements.

But there was one other thing, above all else, that contributed to this change:

The birth control pill  had the direct effect of reducing both the risk and the cost of having sex. It therefore also eliminated an important reason for early marriage, making investment in a career-oriented education more feasible.

Previous research on the effect of changes in state laws that allowed young women access to birth control pills suggests that it is strongly and positively related to both age at first marriage and the fraction of women pursuing professional careers. Because reliable contraception combined with changing social attitudes and laws making labor markets more hospitable, large numbers of women left traditional forms of female employment and sought careers. They are the reason that today's commentators can have meaningful discussions about "women at the top."

That's certainly not something Cathy McMorris Rogers wants anyone to think about too deeply. After all, she's adamantly opposed to the birth control mandate in the Affordable Care Act, saying in the wake of the Hobby Lobby decision, “This morning the Supreme Court defended liberty by ruling that America’s family business owners should not be forced to choose between their faith or unlawful, unnecessary government mandates."

How surprising there was nothing in there about the "liberty" of the working women who will not have affordable access to the single most important factor that brought them into the workforce and allowed them to thrive. (Her cohorts on the right have a solution for the ladies, however: "Close your legs," a strategy that didn't work out too well for working women in the past.)

Instead of helping women maintain control of their reproduction, the "War for Women" is a hodgepodge of stale policy proposals for weak tax credits, a bill to prevent employers from firing women who ask about equal rights in the workplace (shocking that this is even necessary) and the pièce de résistance: a bill to allow "flex time" in lieu of overtime, an employer's dream legislation that will lower their bottom line while giving the ladies the illusion that they are "free" to work less. (Flex time should be an addition, not a tradeoff for overtime.)

Meanwhile, as the Huffington Post's Laura Basset points out, the record shows that in this Congress the GOP blocked the Paycheck Fairness Act -- a common-sense initiative that would halt the practice of firing employees who talk about their salaries with their co-workers -- and refused to bring bills to the floor that would have provided real childcare tax credits, mandatory paid sick leave and family leave and would have required that employers allow pregnant women certain accommodations in the workplace.

The patented GOP reverence for "life" is remarkably absent everywhere in society except on the sidewalks outside of abortion clinics. If these people are fighting "for" working women, they've got a funny way of showing it.

And that is a problem. Despite some high-profile fundraising from the likes of Carly Fiorina, Republican women are being beaten badly by the Democrats. Eliza Newlin Carney in Roll Call reported last week that "female Republican fundraisers, PAC organizers and candidates remain badly outgunned by their Democratic counterparts, particularly in Senate contests. Democratic women in this midterm’s most competitive Senate races uniformly raised more than their GOP opponents." She pointed out that polls in Senate races throughout the country all show "sizable gender gaps."

And these ongoing assaults on women's freedom from the courts, as well as the insulting rhetoric coming from conservative pundits and politicians, are only helping women's groups and the Democratic Party raise more money than ever. It appears that women don't actually like being exhorted to just "close their legs" and seem to understand quite clearly that the Republican Party agenda is hostile to working families and they and their male allies are putting their money where their mouths are. If the policies these Republicans espouse are what constitutes a "war for women" most women would rather they lay down their arms and give peace a chance. Their "help" is killing us.