Tweet and delete: On Gaza, celebrity courage -- and cowardice -- over social media

While some gutsy celebs have tweeted support for Palestine, others have backed down under harsh online criticism 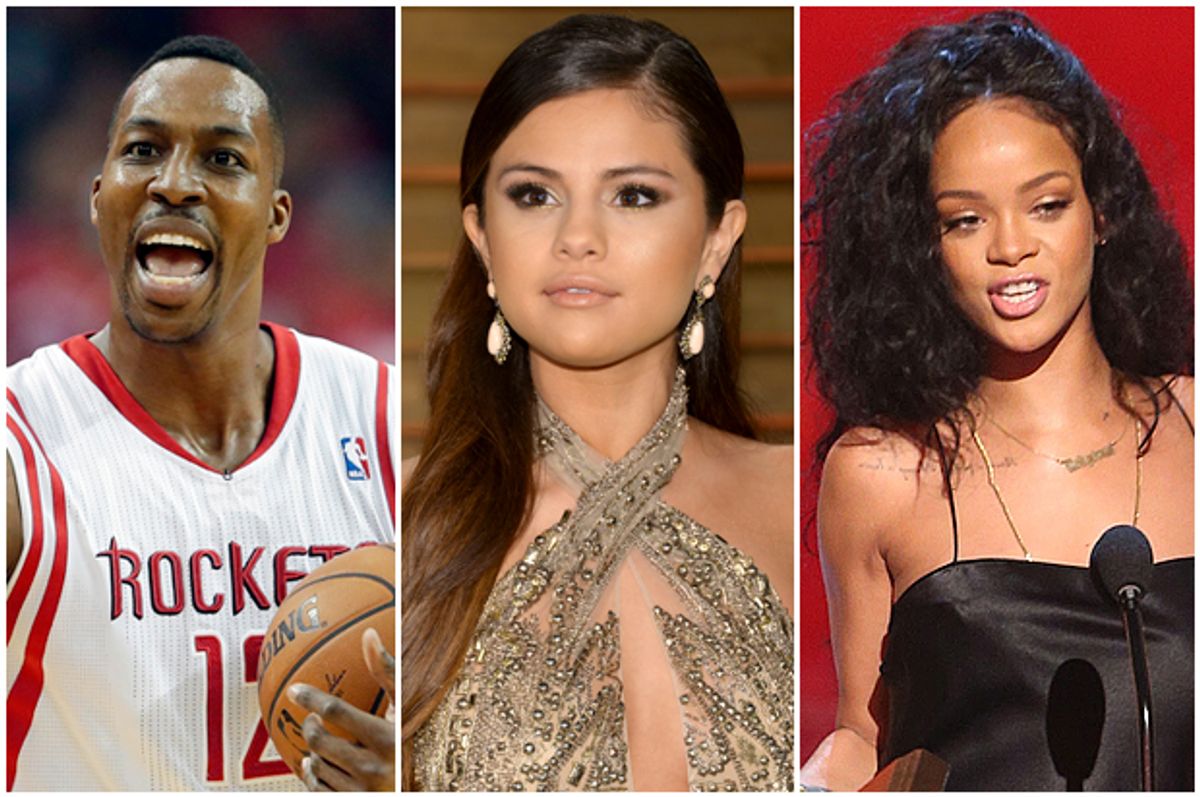 What do NBA basketball player Dwight Howard, singer Zayn Malik and actress Selena Gomez all have in common? Each one spoke out on Israel’s ongoing bombing campaign of the Gaza Strip. A flood of celebrities, including Rihanna, Amar’e Stoudemire, John Cusack, Madonna, Mia Farrow, Mario Balotelli, Javier Bardem, Kerry Washington, Rob Schneider and many others have also chimed in, ranging from Malik’s “#FreePalestine” to Schneider’s “the ugly inhuman siege has had its deadliest day.”

There is good reason for the outpouring of support. Over the last three weeks, Israel has massacred more than a thousand Palestinians, wounded over 6,200, struck hospitals, shelled schools, hit U.N. shelters, cut electricity, and bombed media vehicles. The gruesome images of four Palestinian children bombed to death on the beach penetrated a mainstream media that predominantly reports from the Israeli side of the border and ushers in an endless parade of Israeli officials on cable networks.

Israel’s actions prompted a cascade of indignation on social media and it wasn’t long before a long list of celebrities weighed in. Predictably, these celebrity tweets and Instagram posts didn’t go unnoticed. Within eight minutes, Rihanna deleted her tweet. Howard apologized, stating, “Previous tweet was a mistake. I have never commented on international politics and never will,” and Gomez followed up her “Pray for Gaza” Instagram post with, “And of course to be clear, I am not picking sides.”

So what gives? Why be compelled to speak out, then hurriedly delete? The reality is celebrity brands are big business and a rush of criticism instantly catches the eye of P.R. handlers and agents. As comedian D.L. Hughley noted to TMZ, simply saying “#FreePalestine” comes with "repercussions." These celebrities, varying from concerned to downright outraged, posted their thoughts instinctively. In response, a small group of incensed fans went on the attack, including some who said they would unfollow Gomez in protest and one commenter who proclaimed, “I hope you burn in hell with cancer.” Faced with such controversy, it’s safe to assume that these celebs’ handlers sprang into action and had the posts deleted.

The fact that some celebrities are still at the “tweet and delete” stage doesn’t diminish their heartfelt reaction to Israeli violence being exacted against Palestinians in Gaza. The key takeaway is that celebrities are increasingly disturbed by Israel’s policies and are speaking their minds. That is commendable. Hip-hop artist Talib Kweli, who recently withdrew from a concert in Israel to respect the Palestinian call for boycott, responded to Howard on Twitter, “To @DwightHoward I understand that NBA is a corporation & you have certain obligations. I still appreciate your efforts to be human.”

Despite the backlash, many artists did in fact stand firm. Waka Flocka Flame, John Cusack, Joey Barton, Mark Ruffalo and Eddie Vedder all responded by pushing back on angry fans. After criticizing the U.S. for allowing suffering to take place in Palestine, Waka Flocka tweeted, “Investigate b4 u open your mouth,” while Cusack remarked, “govs bombing innocent people trying to live – resort to murder to solve 0political problems and should be condemned- by all human beings.” Celebrity chef Anthony Bourdain tweeted out a now infamous photo of the beach massacre, saying, “Maybe it’s the fact that I walked on that beach – and have a small child that makes this photo so devastating. #Gaza”

While these tweets certainly aren’t going to end the Israeli occupation, they do point to a shift in discourse. During the massacre on Gaza in 2008/2009, when 1,400 Palestinian men, women and children were killed in 22 days, many responded with visible shock and anger. This led to a significant uptick in student and community organizing on Palestine, a wave of support for the growing campaign for boycott, divestment and sanctions (BDS) against the state of Israel and inspired the formation of organizations in the U.S., including the U.S. Campaign for the Academic and Cultural Boycott of Israel.

High-profile endorsement of Palestinian rights and the call for BDS has gained ground in recent years, receiving support from Archbishop Emeritus Desmond Tutu, Roger Waters, Alice Walker, Naomi Klein, Angela Davis, Stephen Hawking and many others. Furthermore, it is crucial to note that after Israel's attack on the Gaza Freedom Flotilla in 2010, which left nine human rights workers dead – including American citizen Furkan Dogan – the Klaxons and the Gorillaz immediately canceled their scheduled concerts in Israel. Since this most recent bombing campaign of Gaza began, Peter Gabriel, Bryan Adams, Bobby Gillespie and other celebrities signed an open letter to U.K. Prime Minister David Cameron calling for an arms embargo against the state of Israel, while 64 celebrities and seven Nobel Prize laureates called for the U.N. and world governments to impose an arms embargo on Israel in the Guardian.

Those in support of justice in Palestine are out-funded, out-resourced, and out-lobbied. Yet as politicians continue to approve billions of dollars a year in military aid to Israel, BDS campaigns and coalition-building efforts are directly challenging the status quo through alternative means. From the celebrity to the college student, Americans are moving beyond empty words and into concrete actions. This is reflected in the Presbyterian church, university academic associations, campus student senates, and on the Facebook walls of rock stars.

As Israel’s oppressive policies become increasingly devastating for occupied Palestinians, many more people, including celebrities, are going to speak up. While celebrities speaking their consciences are risking alienating rabidly pro-Israel fans and creating a backlash from Israel lobby groups, Israel has admittedly paid students to tweet pro-Israel propaganda and Foreign Ministry Director-General Nissim Ben-Sheetrit stated, "We are seeing culture as a hasbara (propaganda) tool of the first rank, and I do not differentiate between hasbara and culture."  The daily carnage coming out of Gaza, the expanding settlements and apartheid policies in the West Bank, the denial of refugee rights, and the sweeping discrimination and racism against Palestinian citizens of Israel is only going to continue to take a toll on Israel’s image and inspire people to act.

Just as the killing of the four Palestinian boys on the beach or the near beating to death of Palestinian American Tariq Abu Khdeir couldn’t be ignored by the U.S. mainstream media, Israel’s overall policies of occupation, siege, blockade and dispossession are becoming harder and harder to ignore as well. So much so that celebrities on Twitter, Facebook and Instagram are compelled to join the conversation.