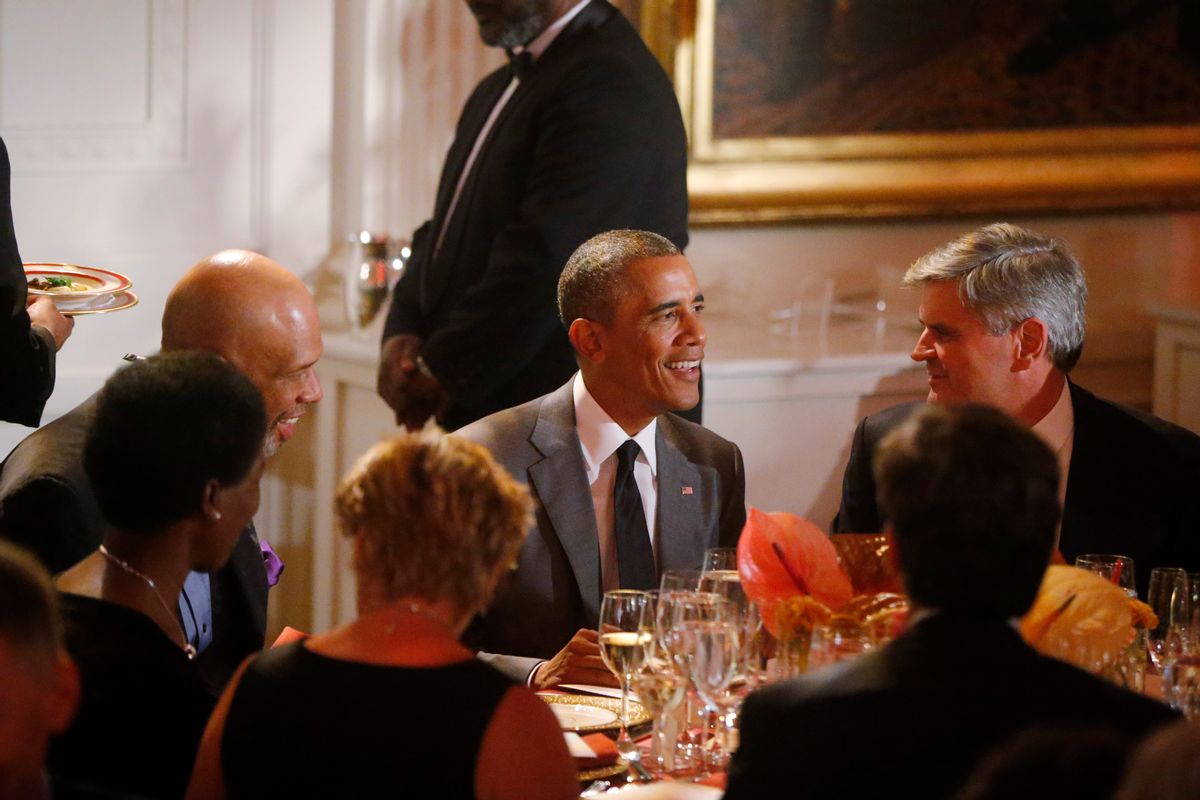 President Barack Obama is seated with Kareem Abdul-Jabbar, retired American professional basketball player, and businessman Steve Case at a dinner for the Special Olympics in the East Room at the White House in Washington, Thursday, July 31, 2014. (AP Photo/Charles Dharapak) (AP)
--

Nearly five decades after Eunice Kennedy Shriver founded the athletic competition for those with disabilities, athletes from around the world stood as living testimony to how their lives had been shaped by a program that treated them as equals and worthy contenders. Under a ruby red hue illuminating the White House chandeliers, Obama paid tribute to what he said the Special Olympics have come to stand for: pride, teamwork, friendship and dignity.

Loretta Claiborne remembers the name-calling and the advice given to her mother: "Rita, institutionalize her. She's not going to have any value." Born with intellectual disabilities, Claiborne felt alone in the world and resorted to using her fists. Yet her journey brought her to the Special Olympics, where, she said, "something happened." Today she can speak in four languages and has run 26 marathons.

"When I look back, I think about all the things that can make this change through a unified generation," Claiborne said.

Wonder and tennis star Andy Roddick mingled with Maria Shriver and AOL co-founder Steve Case as they munched on Maryland crab with corn ravioli and spiced pecans in the East Room. After dessert and coffee, former NBA star Dikembe Mutombo squeezed his 7-foot 2 frame into one of the gold seats in the State Dining Room as pop icon Perry treated guests to a rendition of her hit "Roar," her sequined blue dress shimmering under the stage lights installed for the occasion.

More than 4 million athletes from every corner of the globe compete in the Special Olympics, which feature about 80,000 events per year. Obama singled out six of those Special Olympians whose athletic achievements have accompanied service to their communities as they work to promote a world where people with disabilities aren't segregated from the rest of the population.

"Play unified, live united," athletes chanted, standing up in their chairs as the president and Mrs. Obama cheered them on.

Stamped with what he called "the R-word," Ricardo Thornton was institutionalized as a youngster, but wanted more for himself. Now he lives in a community with his wife, and advocates on behalf of individuals with disabilities. He beamed as he stood a few feet away from the president, recounting his story along with his fellow athletes.

"I am a leader of the new generation," Thornton said. "Teamwork makes dreams work."