Beware the Snapchat economy: Why we should all be worried about the new Internet boom

The tech industry is currently enjoying historic profits. But don't buy the hype! Trouble is on the horizon 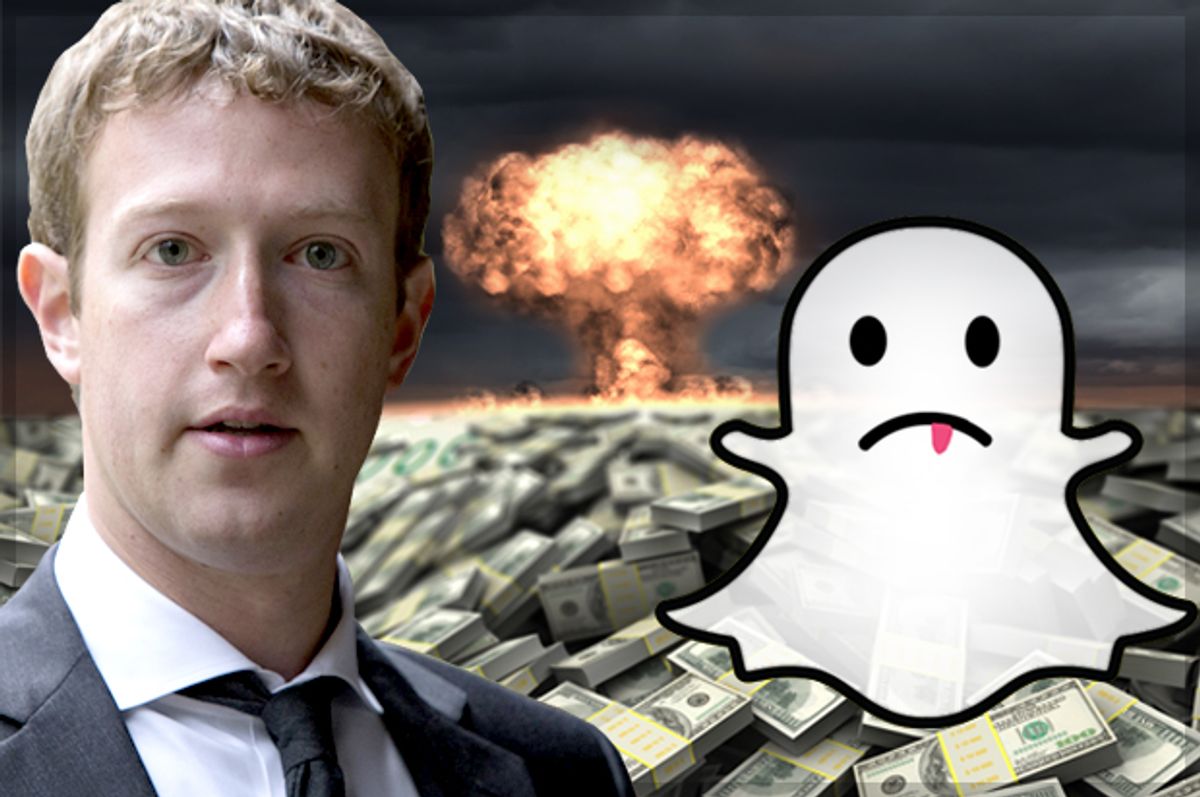 Adventures in tech prognosticating: You wake up, grab a cup of coffee, check Twitter and discover that Snapchat, a revenue-free messaging service mainly used by teenagers to send "ephemeral" pictures to each other, is suddenly worth $10 billion. And you wonder, for the zillionth time this year: Is this latest madness finally unmistakable proof of the oncoming tech-bubble-pocalypse?

Just two weeks ago, Janet Yellen, chairwoman of the Federal Reserve, sounded a tiny note of caution on the possibility of an overheated market. "Valuation metrics in some sectors do appear substantially stretched," she said, "particularly those for smaller firms in the social media and biotechnology industries." So is this what Yellen was talking about? Is Snapchat a harbinger of tech-bubble doom?

The short answer is, probably not yet. With Facebook fresh off the best financial quarter of its existence and Twitter surprising Wall Street with better earnings than expected, while Apple rolls on  -- an amazing $7.7 billion in profit last quarter -- and Google steams ahead, the heart of Silicon Valley is doing quite nicely. Moreover -- if it is true that the Chinese e-commerce giant Alibaba has legitimate business motives for taking a stake in Snapchat -- i.e., fending off fierce competition from Tencent's WeChat in the Chinese domestic market -- then the figures might not be crazy at all. Tencent is currently worth $100 billion! Snapchat is a bargain!

But the long answer is that Snapchat's big score is surely a harbinger of something. If we're not in a tech bubble then we might be in something worse, an expanding zone of hubris and self-satisfaction that will continue to burgeon unchecked, with unpredictable social consequences. We are living through a strange moment: Even as the numbers generated by the tech economy continue to get crazier and crazier, the underlying reality of the profound worldwide shift to a mobile lifestyle keeps lending support to the argument that all these big numbers are rooted in meaningful economic behavior. And so long as that is true, the new leaders of the new tech economy will continue to believe that they can rebuild anything -- government, media, entertainment, travel, even the state of California -- as easily as they can build a social media service that generates cash from mobile advertising.

The message from Snapchat? You ain't seen nothing yet. There is more craziness still to come.

Mark Zuckerberg's empire kicked off the accelerated stage of the current tech economy business cycle when it purchased Instagram in April 2012 for what now seems like a piddling $1 billion; and then pushed affairs to their most extreme point with the $19 billion buyout of messaging service WhatsApp in February 2014. Facebook even offered $3 billion for Snapchat just eight months ago, a number that seemed crazy at the time, but now looks cheap.

And Facebook, we shouldn't forget, was once very much like Snapchat, a fast-growing Web service with minuscule revenue that industry analysts routinely showered with skepticism -- a company whose IPO was widely considered a debacle, appeared to bungle the shift to mobile and, according to at least one pundit, was sure to fatally alienate its user base with obnoxious ads.

On July 23, Facebook reported earnings that knocked Wall Street's socks off. Revenue for the second quarter hit $2.91 billion -- 61 percent growth over the previous year. Profit more than doubled, from $333 million to $791 million. The company now claims 1.32 billion users who check in every month, a figure that represents an extraordinary 20 percent of the world's population.

Marc Andreessen, an early investor in Facebook who currently serves on the company's board of directors, spent the hours following Facebook's earnings release gleefully settling scores on Twitter with Facebook's many naysayers over the years. (It wasn't enough that his net worth had swollen as Facebook stock hit an all-time high; Andreessen also had to get in a bushel's worth of "I-told-you-sos.")

Andreessen has long argued that there is no tech bubble, that everything we are witnessing right now is a consequence of a historic shift to a new era in which "everybody has a supercomputer in their pocket and everybody's connected." So Facebook's financial surge isn't just good for his pocketbook, it's good for his rhetoric. If Marc Andreessen was right about Facebook, then maybe he's right about everything else -- the "disruption" of education, the revolutionary potential of Bitcoin and the gospel of the sharing economy, for example.

Now multiply Andreessen by every other wild dreamer in the tech economy who feels regularly validated by the number of iPhones that Apple sells, or the ability of Uber to raise billions in venture capital, or the latest extreme valuation of a start-up that does nothing but send the word "yo." For every zero that gets added to a market-cap valuation, a geek chorus of hype rises exponentially. Suddenly, we can run California better if we divide it into six parts, our tweets will bring down dictators and we have nothing to fear from tomorrow's robot overlords.

That's what Snapchat's $10 billion means, today at least. And it's a big deal. The confidence generated by a flush Silicon Valley means that proposals like Tim Draper's Six Californias make it to the ballot; it means companies like Uber and Airbnb have the capital to seek wide-ranging regulatory changes in municipalities across the world. It means university administrators are more willing to succumb to the lure of MOOCs and venture capitalists are more eager to seek new domains to disrupt. It means that before we've even figured out what the current wave of disruption means -- for jobs, for inequality, for urban displacement -- we find ourselves hurtling pell mell forward into even more grandiose visions.

But what about tomorrow? What happens when the business cycle finally hits its next trough? What happens when -- as is always the case -- advertising budgets get slashed at the first sign of an oncoming recession. The companies that depend the most on advertising -- the Facebooks and Twitters of the world -- will find that they are in an extraordinarily vulnerable position. The companies that haven't even figured out their revenue model -- that means Snapchat -- will vanish faster than a self-destructing selfie. And only then will the volume get turned down on Silicon Valley's blather machine.

We may have a ways to go before the day of reckoning. The news that the United States GDP grew a healthy 4 percent in the second quarter, while unemployment claims fell to an eight-year low, suggests that by some metrics the overall health of the U.S. economy is better than it's been since before the crash. That's certainly good news for everyone, including all those crazy dreamers in Silicon Valley.

And I'm not trying to downplay the significance of the mobile revolution. If you look closely at the big tech companies whose earnings reports in the last two weeks were disappointing, you will find two -- Microsoft and Yahoo -- that have completely screwed up the transition to mobile, and one -- Amazon -- that is desperately trying to catch up with all the mobile fire Jeff Bezos can muster. In China, companies such as Tencent have figured out how to make substantial amounts of money in a mobile environment -- more than Facebook, even.

But when push comes to shove, a lot of silliness is going to go by the wayside. While researching this article, I found myself reading a convoluted Bloomberg piece explaining how Snapchat might make money. People and brands might pay for "stickers" or "digital watermarks" that could liven up their photos -- according to Bloomberg, there's a company in Japan called Line that is already making a profit doing so.

And then I came to the closing paragraph.

"We see Snapchat as a very personal way of connecting with our Sour Patch Kids fans, since it enables us to send them content and messages one-to-one," says Farrah Bezner, marketing director at Mondelez International, which makes the candies. "Even though our fans are using many different social channels each day, Snapchat stands out as a way to engage more personally with them." SourPatchSnaps has begun sending out short videos of Vine celebrity Logan Paul showing off his "sour-then-sweet" personality.

If the future of the mobile revolution is a personal way of connecting with Sour Patch Kids fans, then we just might have been oversold on its transformative promise. This market correction will be ugly.