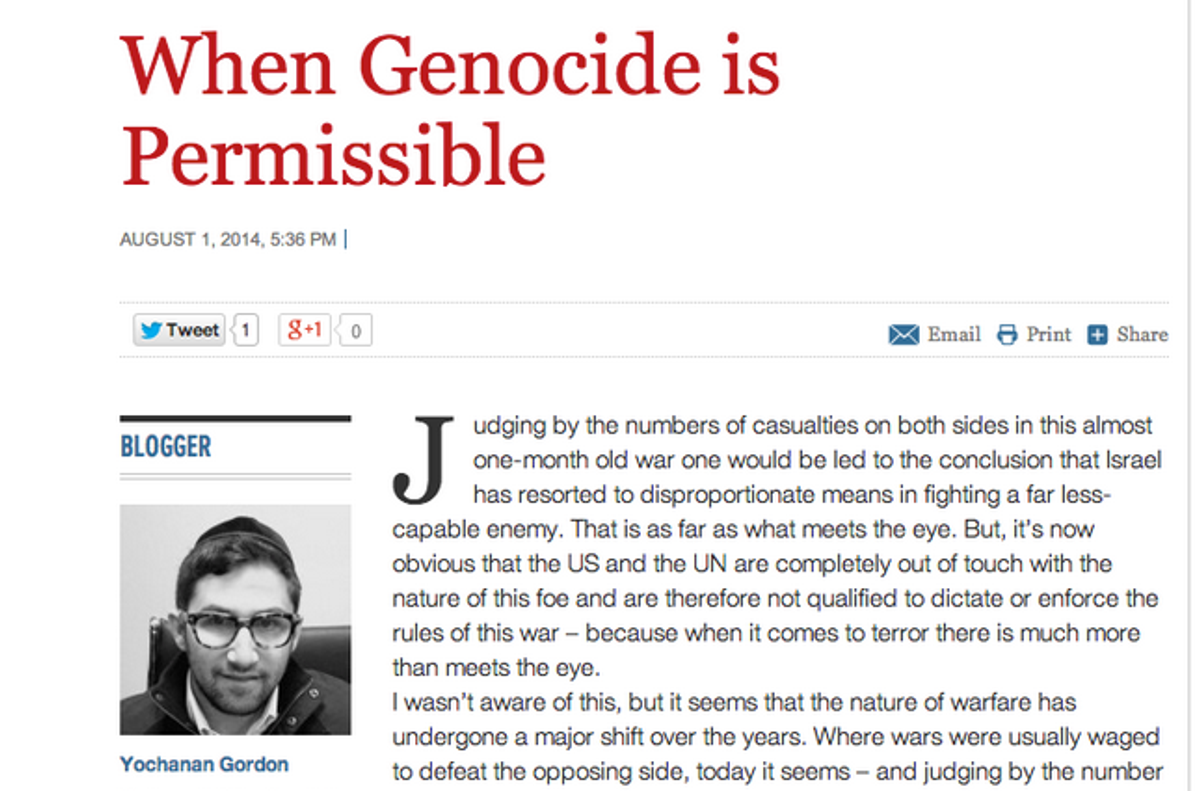 The Times of Israel is under fire on Friday after publishing a blog post titled "When Genocide Is Permissible." The post, written by Yochanon Gordon, was quickly removed from the Times' website, but cached and screen-captured versions of the piece quickly proliferated on social media.

In the article, Gordon blasts the United Nations for its recent admonition against the "disproportionate" use of force by Israel in Gaza, insisting that international observers "are completely out of touch with the nature of this foe and are therefore not qualified to dictate or enforce the rules of this war."

Because of the supposedly unique menace that Hamas presents to Israel, Gordon contends that "nothing ... can be considered disproportionate when we are fighting for our very right to live."

He continues later on in the piece:

Hamas has stated forthrightly that it idealizes death as much as Israel celebrates life. What other way then is there to deal with an enemy of this nature other than obliterate them completely?

News anchors such as those from CNN, BBC and Al-Jazeera have not missed an opportunity to point out the majority of innocent civilians who have lost their lives as a result of this war. But anyone who lives with rocket launchers installed or terror tunnels burrowed in or around the vicinity of their home cannot be considered an innocent civilian.

And then concludes by asking the following rhetorical question:

If political leaders and military experts determine that the only way to achieve its goal of sustaining quiet is through genocide is it then permissible to achieve those responsible goals?

You can read a full version of the article here.

Gordon does not cite any "political leaders and military experts" who have called for the genocide of Palestinians in Gaza. However, recent weeks have seen a spate of hard-line Israel supporters in the media aggressively justifying Israel's campaign in Gaza, which has already claimed the lives of nearly 1,500 Palestinians, many of them civilians.

Gordon, for his part, seems to be sticking to his guns. A Twitter account that appears to belong to the writer responded to critics on Friday afternoon. (Update: Gordon's twitter account has been deactivated, and his tweets deleted.)

The page where Gordon's piece was original published now bears a note reading: "The contents of this post have been removed for breaching The Times of Israel's editorial guidelines." The original headline has been removed entirely. According to his author page on the Times' website, Gordon has been blogging for the newspaper since April.

Update: The Times of Israel has released a formal statement about the article, calling it "damnable and ignorant" and stating that the newspaper has discontinued Gordon's blog. "We will not countenance blog posts that incite to violence or criminal acts," the statement reads.

Gordon, meanwhile, has issued an apology of his own, stating that "I never intended to call to harm any people although my words may have conveyed that message."

"I pray and hope for a quick peaceful end to the hostilities and that all people learn to coexist with each other in creating a better world for us all," the note ends.