Patricia Clarkson: "I'm impulsive — which is why I never married or had kids"

Clarkson spoke to Salon about "Last Weekend," playing mothers onscreen, and her relationship to her own mom 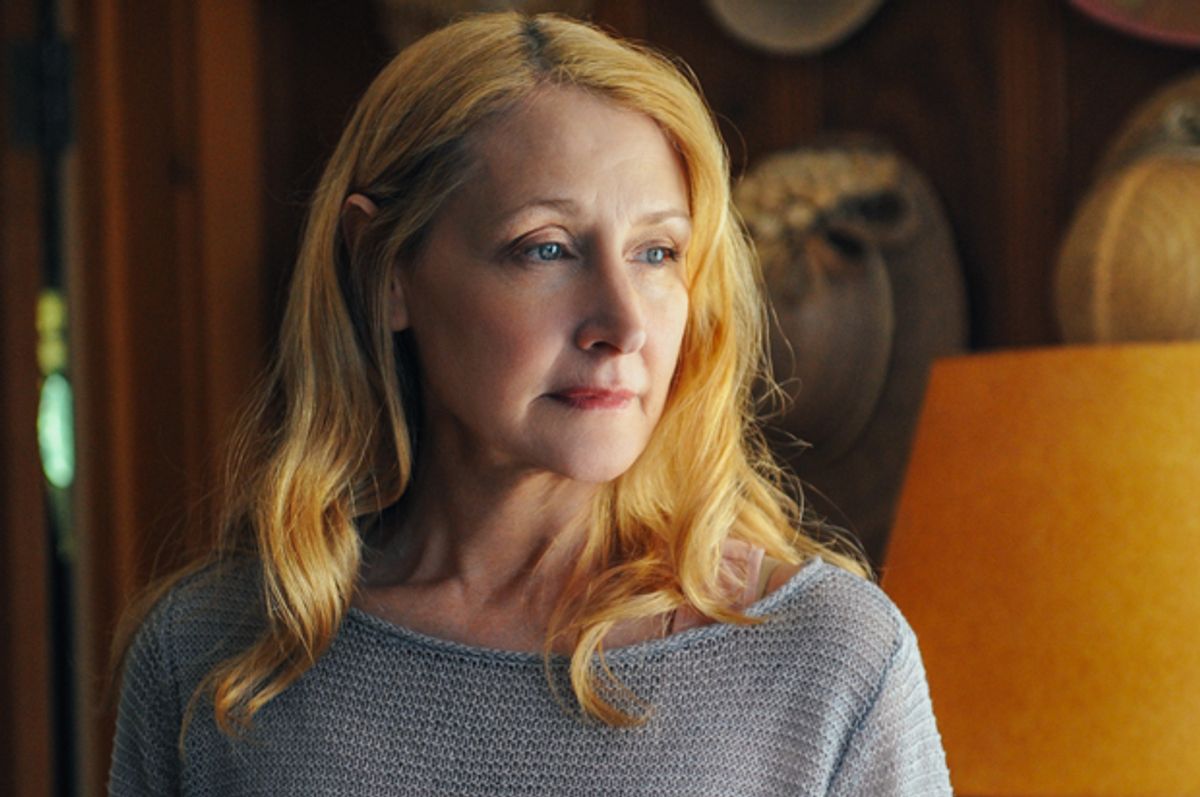 With her gravel-and-honey voice, Patricia Clarkson has been steadily ascending since her breakout role as Greta, a louche German actress, in “High Art” back in 1998. An indie darling for years, Clarkson has played tough but vulnerable women in films as varied as the horror film “Wendigo,” the period piece “Far From Heaven” and the comedy “The Station Agent.” Clarkson also makes memorable turns in big Hollywood films like Martin Scorsese’s “Shutter Island," and “Friends with Benefits,” starring Justin Timberlake, who also played her son in the video, “Motherlover.”

Clarkson is a character actress, who gets a rare leading role — her last was “Cairo Time” five years ago — in the lovely independent drama “Last Weekend.” Written by Tom Dolby, who co-directed with Tom Williams, the film features rich people in trouble behaving badly. Clarkson stars as Celia Green, the mother of two sons, Theo (Zachary Booth) and Roger (Joseph Cross), who convene over Labor Day weekend at the family’s Tahoe lake house to grapple with various personal and professional crises.

Celia smothers, criticizes and loves her kids perhaps too much. Do you think she is a good mother?

I think there are moments when she is a very good mother, but she lacks certain skills. She is spoiled and selfish, and she raised spoiled, selfish children. These people exist. It doesn’t mean they are bad people. I think she was an excellent wife and a complicated mother.

You've often played mothers on screen — “Motherlover” arguably being the best. You don’t have any children…

And that will remain so…

So what qualities do you draw on or share with your own mother?

I have a powerhouse mother. She ran the city of New Orleans, and retired a month ago. She was president of the city council. She worked for several mayors, including, unfortunately, the mayor who is going to jail. She’s an incredibly accomplished, fierce woman. But with that came demands, and she demanded a lot of us as children. She was incredibly supportive — especially when I wanted to go off to New York to become an actress. She was into following dreams, and deferred her dream by raising five children. She’s thrilled I’m flourishing and living my dream. But all my sisters are accomplished. I’m the schmoe-est of the five because I’m just an actress.

You tend to project a fierce intelligence, and no-nonsense quality, when you play characters like Celia. How did you find her "inner bitch"?

I find my own inner bitch, which is ever-present. It’s part of the character and the process of finding Celia. All the mothers I play are different. They come from different backgrounds and have different emotional lives, husbands and children. With Celia, I had to keep her sharp and focused and not compromise on making her foolish.

Celia resists change, but she is also impulsive. Are you more controlling or impulsive?

I can be controlling, but I’m much more impulsive. That’s why I never married or had kids. I’d jump in the water in my clothes [as Celia does], but not out of an airplane. I’m just fine flying in one.

The Tahoe home was one of two getaway spots for Celia and her family. Where do you like to get away from it all?

My favorite place is in my New York apartment. I like to be home because I travel so much. That’s my solace and oasis. I have a wonderful apartment in the West Village, and I like being in it. I have a new dog, a mutt I rescued her from the humane society. Home is my favorite place to be. Or New Orleans. I do love to go home because most of my family is there. I would love to spend more time in Venice, Italy.

There’s a sweet moment in “Last Weekend” where Celia talks about how her life might have been different. If you were not an actress, where do you think you would be in your life and career right now?

I’m not sure where I’d be. I’m fortunate that I got to do what I want to do. I don’t think I have any other skill. I might have been a journalist, because those are my heroes. But I didn’t have the wherewithal for that.

The most interesting thing about your performance here is that viewers have to recalibrate how they feel about Celia in just about every scene. Right when you lose patience with her, she has a tender moment where she regrets something simple, like missing a sunset.

I think that scene is where you see how complicated a woman Celia is. There’s an enormous pain — she’s in enormous strife. People who have money can struggle too. They have so much, and yet they have nothing. There were these incredible, tiny, minute, subtle shifts to play, and I loved playing it. But it was much different from the radical transformation I did for Woody Allen in “Whatever Works,” which was fun and delicious. But I think there will be people who get it — that she is she is a fierce woman, who loves her family deeply. It’s all she has. She wasn’t completely successful, her children dislike her, and she has been so critical and tough on them for no reason. I think she has pushed them away, and she realizes it may be too late.