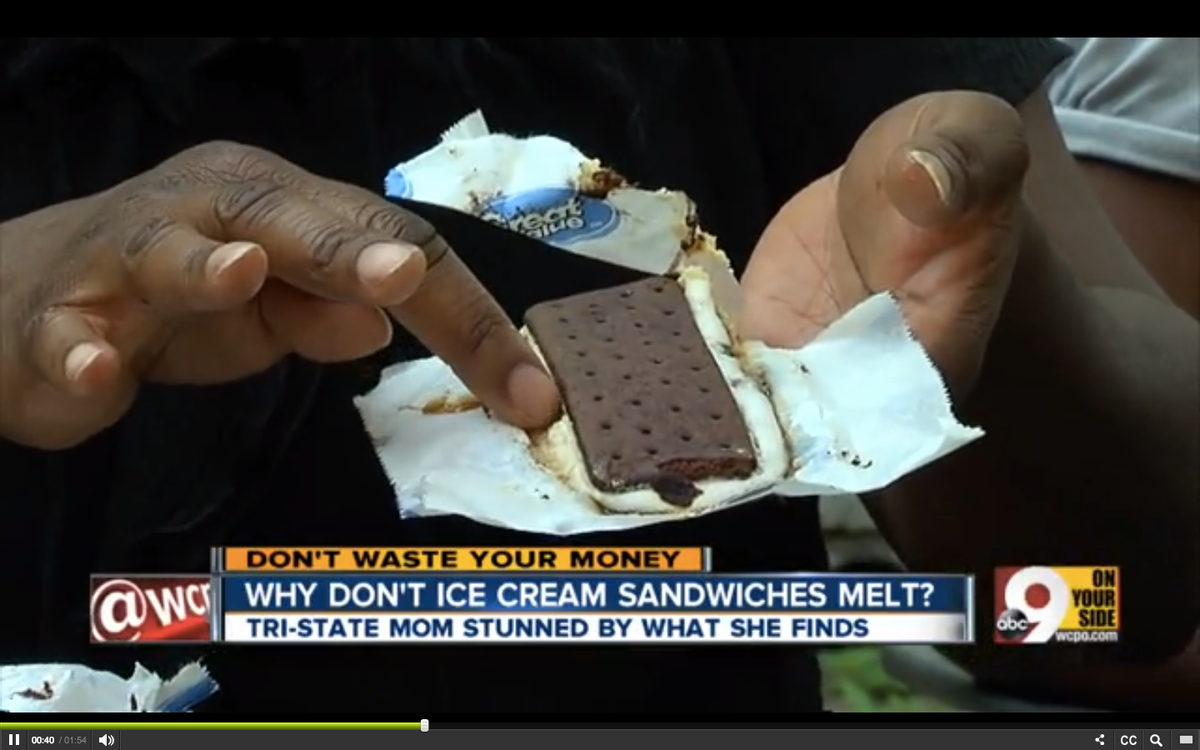 Technically, ice cream follows the laws of thermodynamics, but what would you think of an ice cream that didn't melt on one of the hottest days of the year? Cincinnati station WCPO recently reported on Christie Watson's discovery that her Walmart Great Value ice cream sandwich wouldn't melt even in 80-degree heat. What's that? Ice creamshould melt.

"I thought it was quite weird so I looked at the box and it said no artificial ice cream," Watson said. "So I thought to myself what am I feeding my children?"

Watson couldn't fathom how that could happen so she left out an ice cream sandwich outside again and came out with same results. Then WCPO reporter John Matarese did a test with a Haagen-Daaz ice cream sandwich, a Klondike Bar and the Walmart Great Value sandwich. After 30 minutes in the sun, the Walmart sandwich still resembled a sandwich, the Klondie bar melted some and the Haagen-Daaz was more like a milk puddle.

Dan Collins of 100.5 Kickin' Country in Sioux Falls heard the news and filmed his own test. The same thing happened and the Walmart brand held its shape.

The culprit? Reporter John Matarese contacted Walmart and was given the following statement:
"Ice cream melts based on the ingredients including cream. Ice cream with more cream (sic) will generally melt at a slower rate, which is the case with our Great Value ice cream sandwiches. In the frozen aisles, Great Value ice cream sandwiches are one of the top sellers, and we are glad to be able to offer a great treat that families love."

Virgina Tech food chemist told the L.A. Times that the less fat the ice cream has, the slower it will melt.  Although the Great Value ice cream doesn't quite melt, the ingredients meet all FDA requirements and and have less fat, too. The Great Value ice cream includes corn syrup, guar gum, and cellulose gum, which are common food stabilizers that help keep the sandwich's shape.

The Haagen-Daaz ice cream ingedients include cream, milk, sugar, and eggs, and vanilla, "but no corn syrup or gums of any type." This is why it passed the melt test with ease, but not the cost test. It's about $3 more to purchase Haagen-Daaz, Matarese says. But, in this case, melting is included.