My life is a Bravo reality show: How "Jersey Belle" smooths over my hometown's poisonous history

I grew up in Mountain Brook, Alabama, and its relationship to race and class is not what Bravo wants you to think 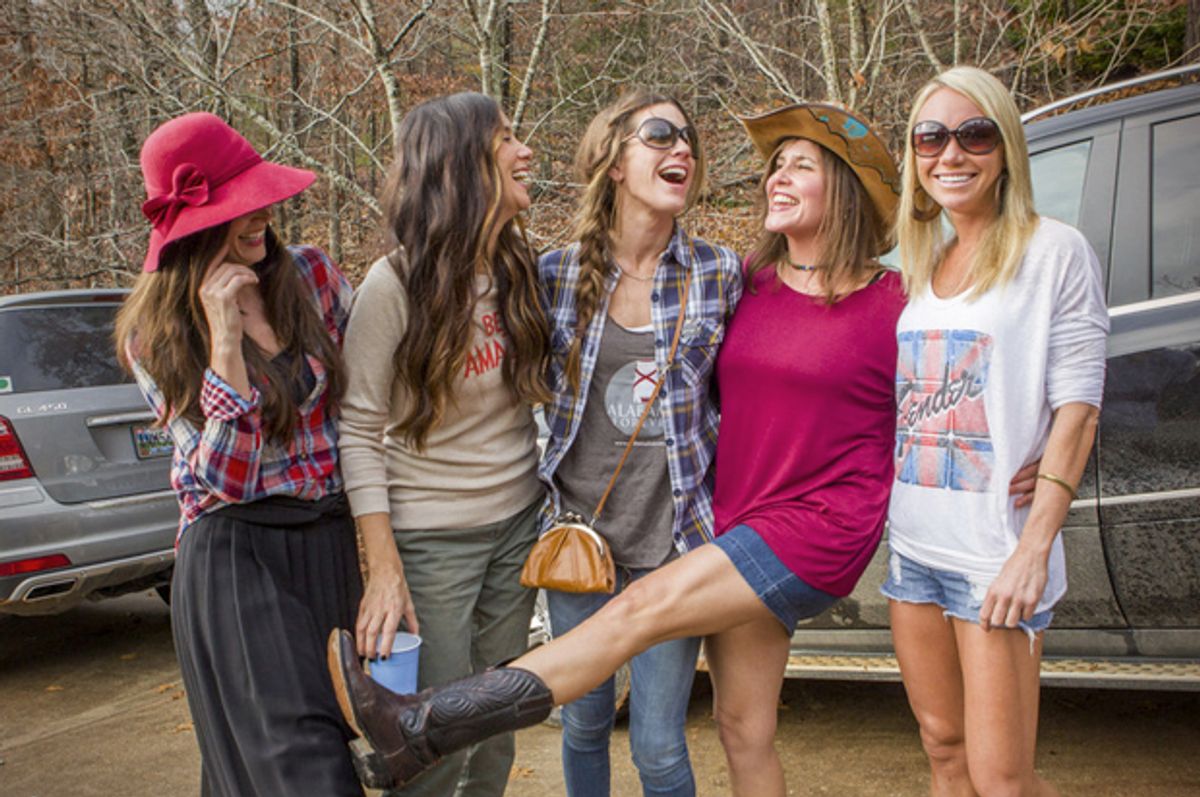 Mountain Brook is more than just a bucolic name fit for an affluent suburb of Birmingham, Alabama. It is a lifestyle of slow, velvety words, flawless exteriors and complex social rhythms designed to hide everything awful that runs just below the surface. Alcoholics, pedophiles, bulimics and abusers — all manner of perversion and its attendant coping mechanisms runs rampant through my hometown like the thick curtains of kudzu draped over highway overpasses, gothic and hauntingly beautiful even as it smothers all plant life in its path. And now it's the setting for a new Bravo reality show, "Jersey Belle," premiering Monday. Bravo, insinuating its boom mic into the boudoirs of the common man, could blow the roof off the realities of life in Mountain Brook. But after watching the first episode, I can already tell it won't.

Living in Mountain Brook is like living in Spanx. It’s hard to breathe. Life seems perfect, and indeed, the word “perfect”, or some derivation thereof, is said 14 times in the pilot. Perfection is the armor that hides all of the frightening imperfections lurking beneath, inviting judgment. Should you deviate from perfection, you will be judged. Harshly. My formative years were spent in a Stepford world of striving to assimilate, to avoid judgment, to escape the snobbish scrutiny of the "better" classes.

And yet the premiere of "Jersey Belle" makes it clear that this is a show about embracing imperfection. First we meet our protagonist Jaime Primak Sullivan, an outspoken Jersey transplant learning to navigate life in the Deep South.

The camera rolls, and it is crass versus class. Images of manicured lawns, precise as military buzz cuts, and tennis courts worthy of Wimbledon are interspersed with snippets of the Jersey Belle colorfully commenting on the status and condition of her lady parts to the horror of the genteel Southern crowds gathered around her. How in the world did she end up in Mountain Brook? Witness relocation? (I’d never had a choice in the matter, having moved there with my parents at the age of 2.)

Turns out, she married a local boy and relocated from LA, though she continues to work as a publicist representing stars such as Chris Klein and Wayne Brady. A timeline isn’t really specified, so it’s interesting to note that she’s actually been living there since 2006. But it can take a lifetime or more to gain acceptance into a place as exclusive as Mountain Brook, where much of the population can trace their Southern roots back to plantation days.

When we meet Jaime’s friends, it becomes clear that they do not quite fit the mold either. Jaime’s best friend, Luci, a divorcée with three children and a houseful of monogrammed items, including her bathroom soap, describes finding three sacks of baby clothes on her doorstep after her divorce — clothes she had gifted a friend who returned them because she felt Luci to be a scorned woman. Mountain Brook may be the only place besides Amish country where one actually still gets castigated for divorce.

Another friend, Arden, twice divorced, is engaged to be married to a prominent Mountain Brook bachelor. We find out she is from the other side of the mountain, the almost as affluent zip code of Forest Park, which might as well be Appalachia in the eyes of a native Brookie.

Arden’s future mother-in-law, who she has only met once in the three years she has known her fiancé, does not show up for the climactic bridal tea, and we are left wondering whether she’ll be at the wedding. At first, I assumed the behavior could be attributed to a disdain for divorced women, but a little Internet research makes me think she’s just looking to stay out of the spotlight after a nasty divorce from her own husband, who has proclivities, shall we say, in a Woody Allen-Soon Yi kind of way.

What is appealing -- but also unrealistic -- about Jaime is that she hardly tries to fit in. This definitely wasn't my approach, ages ago, to currying favor with the locals. She speaks her mind, much to the eye-popping, slack-jawed stupefaction of her Southern friends. And yet they seem to love her, even if her marital advice is more about bjs than Bible verses, because she’s the antidote to the Tiny Kingdom’s stultifying sameness.

When my parents first moved to Birmingham in 1974, they knew no one. They settled in Mountain Brook, the only acceptable suburb for white, affluent couples at the time. The wealthiest city in Alabama, it was the kind of place you were born into. One didn’t simply move there. Everyone said the schools there were the best. What they really meant with their conspiratorial winks was that the schools were all white. People too sophisticated to join the Klan had decided to hike up property taxes once segregation laws were repealed.

There was a code, a decorum that most everyone abided, and to stray from that proscribed behavior was to invite judgment. You could feel a person try to pucker and clench their wildness to fit the mold. We talked harshly of my father’s colleague’s wife who never showed up to social gatherings — she was a drunk; she was antisocial; she was uppity. Even those of us who didn’t quite fit in belittled our fellow transplants for not adhering to the edicts of the Mountain Brook lifestyle. We were like tenant farmers abusing slaves merely to assert ourselves a rung higher on the socioeconomic ladder.

Like any small town, gossip sustained us, yet we would all do just about anything to avoid being the subject of it. Everyone knew that Suzy had had an abortion, and it was common knowledge that Anna Katherine’s father was a mean drunk. Bulimia was a sport and alcohol a remedy, and most families had something to hide.

But on "Jersey Belle," Jaime hides nothing and expresses everything that is on her mind, to the delight and horror of her friends. At one point, as she prepares to make her assigned dish of Roquefort Grapes for the bridal tea, she says to a friend, smelling the stinky cheese — “it would be kind of amazing if everybody got, like, amoebic dysentery and everyone’s assholes fell out.” A bout of "Bridesmaids"-worthy intestinal distress would certainly be a great leveling force. I only wish I’d had that same sense of humor in high school every time I got picked last in gym class, leered at like I was a leper and teased for driving a 1969 Buick Skylark in a parking lot full of Beamers.

I watched the premiere with expectations of high drama and lampoonery, and yet the drama was subtle and the lampooning unnecessary, for as they say, you really cannot make this stuff up. Mountain Brook needs little embellishment to be interesting and bizarre, but there is no epic "Real Housewives" drama, at least not yet, and a glimpse of upcoming episodes gives me the sense that much of the drama on the show will come from Jaime herself, manufacturing emotion where storylines are weak.

Perfection is boring, and it is Jaime, with her unfiltered lip and brazen behavior, who provides the entertainment. Early in the episode, Arden tells us that she thought Jaime was a real “b” when she first met her, because Jaime compared her to Ellen DeGeneres. Clearly, she feels this is a huge insult, yet she says nothing overtly offensive about the comparison. The people of Mountain Brook are far too refined to upend tables and throw prosthetic legs, and refinement, like wearing all white, simply doesn’t show well on camera.

I’ll be watching faithfully as the season unfolds, which is a real commitment considering I don’t own a TV. I suspect there won’t be a dinner scene at The Club, the posh old country club with stunning city views, where most of the wait staff is black, or at least used to be, and uniformed in crisp white jackets and gloves while attending to wax-like figurines of stodgy white couples. I doubt they’ll discuss the ridiculous and cruel Greek system at Mountain Brook High School, since it was finally eliminated a few years back. I fully admit that my image of Mountain Brook is one frozen in  time, like a specimen in a jar. In recent years, Birmingham has become a popular and thriving place to live, and I am sure the influx of cultures and ethnicities has only helped bring Mountain Brook out of the cotton fields. But there will always be subjects that remain off limits. Jaime Primak Sullivan can sound off on vaginas as much as she pleases, but heaven help her should she ever bring up class or race.

Kristine Lloyd is a freelancer in Seattle who is currently working on a memoir called "The Importance of Being Regular."