New buildings are creating separate entrances for low-income residents. A perfect metaphor for our times? 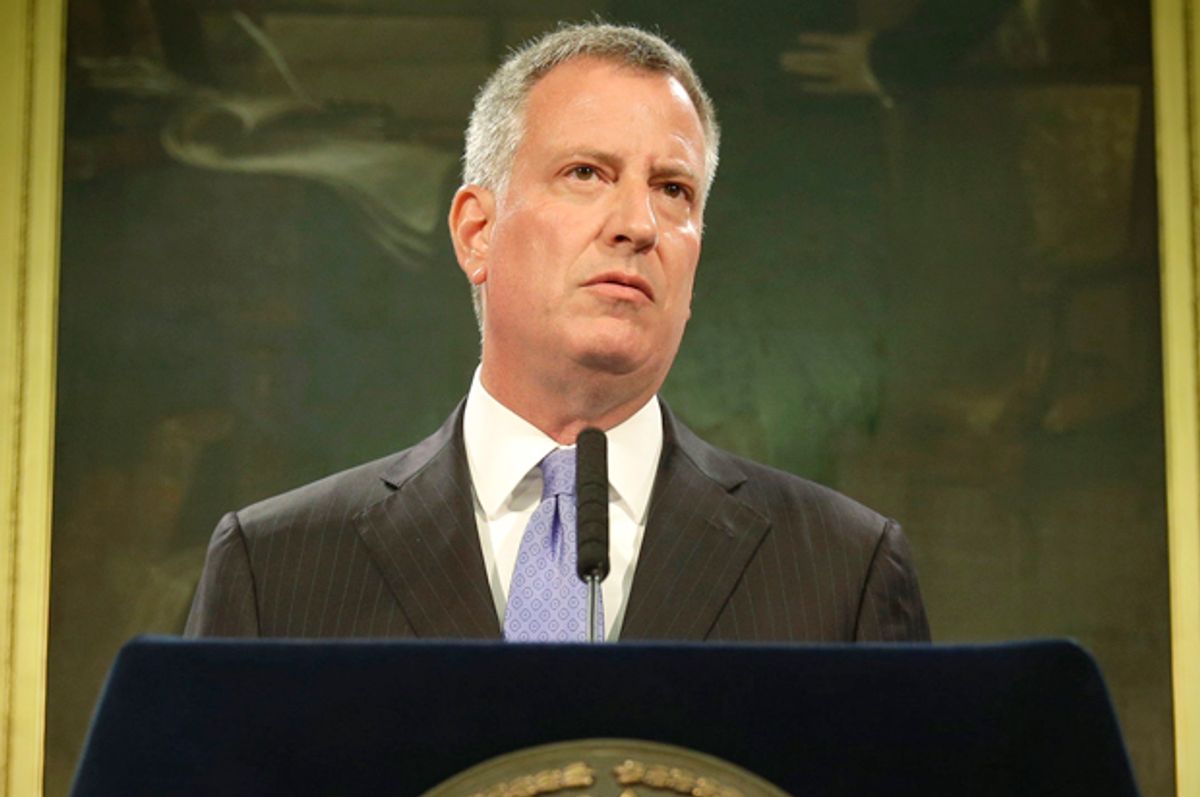 The condominiums of Riverside South, a dull glass comb along the Hudson River in Manhattan, have hardly made an interesting contribution to New York’s architectural profile. But the development has made an impact on the global lexicon, thanks to a new building’s two entrances: one for buyers of market-rate apartments and one for tenants of subsidized units.

By now you’ve surely heard about Extell Development’s “poor door,” approved last week for 40 Riverside Drive, talk of which has reverberated unfavorably from Park Slope to Paris. It’s easy to see why the concept hits that rare sweet spot for viral architecture. The poor door opens on the tensions of the times — the housing shortage, the divergence of the rich and poor, the sense of threadbare social fabric.

It’s not an isolated case. New York has a number of mixed-income developments where facilities like pools and gyms are restricted to residents who have paid the full price. London, which has adopted a similar strategy for creating affordable housing, also has a raft of poor doors. “Even bicycle storage spaces, rubbish disposal facilities and postal deliveries are being separated,” the Guardian reports.

A perfect metaphor for our times? Perhaps. But more important, an illustration of how a common, progressive affordable housing strategy is ill suited to a city’s needs.

It’s easy to see, from an economist’s perspective, the shortcomings of the policy that produces poor doors. Essentially, New York City and state offer incentives for residential developers in expensive neighborhoods to include affordable housing in their projects. The result is a substantial deadweight loss: The more posh the neighborhood, the greater the difference between the price of subsidized apartments and their market value. If the 55 subsidized apartments at 40 Riverside Drive were instead sold on the open market, the city could likely collect tens of millions of dollars for the construction of affordable housing in a location less in vogue.

In the latter scenario, the city could add twice as many affordable units to its supply. But such a scheme would go against what is now the bedrock theory of public housing, honed as a response to notorious projects like St. Louis' Pruitt-Igoe and Chicago’s Cabrini Green: avoid concentrations of poverty.

Shunting the poor into marginal, self-contained ghettos has always been a lamentable policy on a symbolic level. But there’s ample theoretical underpinning of mixed-income housing, too: Economic integration means safer neighborhoods, superior schools and hospitals, and, more complex and possibly more important, a retreat from “the social pathologies” of high-poverty neighborhoods. Virtually everyone in the business of providing public housing, whether on the supply side (subsidies for specific buildings) or the demand side (vouchers for needy families) agrees on the benefits of what’s euphemistically called “dispersal.”

How that works in practice is more complicated. The landmark “Moving to Opportunity” study, conducted over decades by the Department of Housing and Urban Development, concluded that “the effects on the well-being of residents moving out of [extreme-poverty neighborhoods] into less distressed areas remain uncertain.” It’s hard to pinpoint where integration occurs. In a mixed-income building itself? In local parks and shops? Or through institutions like community boards, schools and hospitals?

If there’s one aspect of mixed-income housing that has most obviously fallen short, it’s the promise of new social dynamics and inter-class bonding. “Cross-income interactions have been found to be infrequent and inconsequential for the most part,” concludes a 2010 Urban Institute review of the literature. According to a 2013 report in the HUD journal Cityscape, “research has demonstrated little interaction and community building between low-income households and more affluent ones.” And in a separate study from the same issue, researchers wrote that “economic desegregation occurs in mixed-income areas as a spatial fact — households of lower and higher income levels live near each other — but propinquity has led to little social or otherwise meaningful integration across lines of income.”

In short, mixed-income housing may be failing at one of its primary goals, even without a poor door to segregate and stigmatize low-income residents. And with it? As the authors of that last study report, to no one’s surprise, “elements of building design, such as lack of common areas or shared building entrances, can serve to limit informal interactions, which otherwise could serve as the basis for developing more significant ties."

That’s why poor door incidences are both appalling, on a local level, and frustrating, as a citywide trend: New York is stunting the growth of affordable housing in pursuit of an ideal that remains elusive.

What if, given the mixed literature and practical shortcomings of mixed-income developments, on-site affordable units aren’t the best concession that New York can extract from developers?

“Recent social scientific findings,” writes Yale law professor Robert C. Ellickson in a 2010 paper on the subject, “suggest that the social benefits of mixed-income projects are unlikely to outweigh the inherent inefficiency of the approach.”

In a city with one of the nation’s worst housing crises, where the primary concern of poor neighborhoods seems to be not isolation but the endless, centrifugal encroachment of gentrifiers and rent hikes, the real scandal is that the city and state should accept an affordable unit on the Upper West Side instead of a million dollars in cash.

With that money directed into more efficient affordable housing construction programs, the authorities could make a far greater impact on the housing shortage. The result would hardly amount to “concentrated poverty.” Most of the renters in Extell’s development will likely be working-class, with an income ceiling twice the national poverty line. In any case, new affordable housing doesn’t conform to the sprawling, mid-century model whose failures still haunt the imagination of urban planners today.

That doesn’t excuse the fact that developers using generous state tax breaks treat subsidized tenants as a threat to their facilities. The city’s power structure is already up in arms, with politicians calling to close the loopholes that made the poor door possible.

It would be progress. Progressive? That would be revising the tradeoff system that puts developers in charge of affordable housing in the first place.