Mary J. Blige's curse: Why the world ignores one of the best living R&B musicians

If you're a woman making R&B, especially one older than 40, and your name isn't Beyoncé, you're in trouble 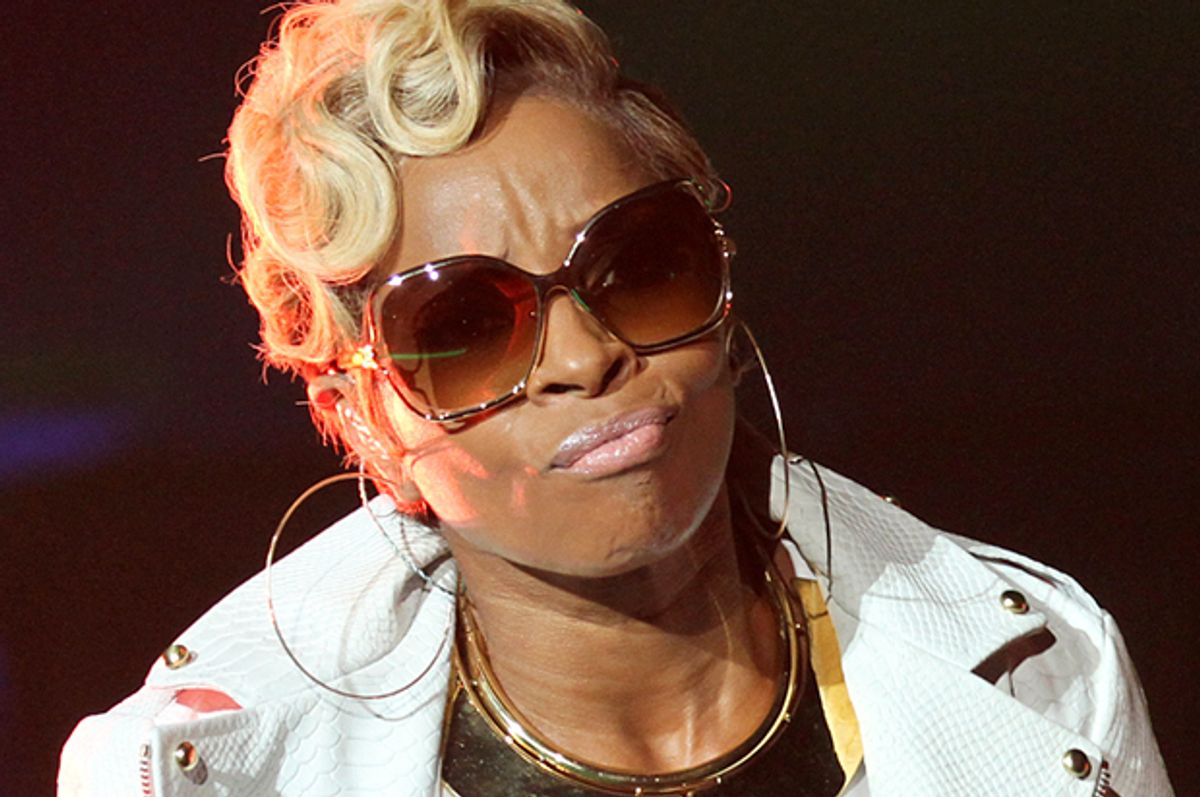 Mary J. Blige, a onetime superstar with stacks of Grammies and plenty of hits, now lingers in semi-obscurity — eight of her albums went platinum, but her latest, "Think Like a Man Too," won’t get near that mark. Meanwhile, Sam Smith gets to No. 1 by relying heavily on the gospel-influenced style that Blige has down pat, though he sounds more old-fashioned than she ever did. While Smith takes the charts, he doesn’t win (critical) hearts — those are controlled by acts like Little Dragon, How to Dress Well or Jessie Ware, who often record for independent labels. The Blige connection is strong here too, as the music of this group is explicitly influenced by mainstream ‘90s R&B, which Blige revolutionized. Even though her fingerprints are everywhere, she is mostly ignored, crowded out by old-school-sounding white belters on one side and the hip indie groups on the other.

It’s actually remarkable that Blige is even still making music. Other big names from '90s R&B — including Janet Jackson, Brandy and Monica — are rarely heard from. Even ladies who had more recent success in the first half of the ‘00s, like Ashanti, Toni Braxton and Kelly Rowland, struggle to make a dent now. (All three put out albums within the last 18 months; none got any attention.) If you are a woman making R&B, especially one older than 40, and your name is not Beyoncé, few people care.

Which is crazy, because Blige is undoubtedly one of the most influential figures of R&B’s last 20 years. In Questlove’s memoir, "Mo’ Meta Blues," which came out last summer, he recalls the first time he heard Blige’s second album. “The day that Mary J. Blige’s 'My Life' came out in 1994, we all just sat in the van scratching our heads,” he writes. “We had never heard anyone sing over samples before … We were so caught between rejecting it as untenable and accepting it as vanguard.”

Blige also has high-powered admirers outside of R&B and hip-hop. A Pitchfork cover story on the singer Chan Marshall (who performs as Cat Power) noted that Blige’s “2005 album 'The Breakthrough' is important” to Marshall — “desert-island important.” Bob Stanley, a journalist and a member of the band Saint Etienne, writes about the way Blige changed the musical landscape in his recently published "Yeah! Yeah! Yeah! The Story of Pop Music From Bill Haley to Beyoncé." “Mary J. was also year zero for a crop of new, more glamorous singers waiting in the wings — Aaliyah, Beyoncé and, beyond them, Ashanti and Amerie — all of whom might have plumped for the Whitney/Mariah career model without Mary J.’s breakthrough.”

Whenever you hear someone singing over a sample, you have Blige to thank. Her vocal style would have fit in well in the ‘70s, but her backing tracks show hip-hop’s willingness to cannibalize that same source material she channeled. A singer like Smith loves her vocal pyrotechnics; he also misreads her by ignoring the up-to-date aspects of her music.

"Think Like a Man Too" is a movie soundtrack containing 13 original Blige songs and credits from star producers like Rodney Jerkins, Pharrell Williams, Terius Nash and Tricky Stewart. The album opens with a thud — a cover of a 1982 disco hit for Shalamar that misreads Blige.  She has never been a dance artist. Her lone No. 1 pop hit, the Dr. Dre-produced “Family Affair,” was up-tempo, but it’s not light on its feet; it has the power of a bulldozer. Not only is “Night to Remember” a poor fit for Blige, it sounds out of date (in the same manner as Sam Smith), and the string of songs immediately following it — “Vegas Nights,” “Moment of Love” and “See That Boy Again” — do as well.

“Suitcase” and “Power Back,” which appear later on "Think Like a Man Too," are the tracks that show the breadth of Blige’s abilities, as she takes on contemporary sounds and makes them her own. “Suitcase” revolves around a little piano motif, close to something DJ Mustard uses in any number of his radio hits (take YG’s “Who Do You Love”). The percussion contains both finger snaps, which play an important role for artists from a variety of backgrounds — How to Dress Well, Sevyn Streeter, Lorde — and rhythmic shouts, like the chants of “hey” that pervade the radio from Iggy Azalea on down. Blige picks up speed as she works through the hook, and the beat does the same, building up to a post-dubstep sort of drop. Then comes the punch line: “While you’re tryin’ to explain, I’ll be zippin’ up my suitcase.”

In “Power Back,” Blige really asserts herself. She sings to a lover, but it might as well be to the pop world at large. “I think it’s funny all the games you play. But I don’t play with you so why you choose to play with me that way. All I do is treat you with the utmost, I need the same.” She goes on to suggest, “if you’re looking for that ratchet-ness, don’t look my way.” This is funny and powerful — DJ Mustard is the king of radio right now and the king of ratchet; Blige already put a personal twist on his sound in “Suitcase,” and now she adds a little kiss-off a few songs later.

“Power Back” has weird and edgy production, a barrage of thin sounds that create a heavy rhythmic bed. Horns enter, imperious, threatening and also of-the-moment, since brass appears in a number of recent songs from Ariana Grande and Jason Derulo. Blige lists the ways she remains in control, relying on the age-old power of call-and-response. “When I stop callin’/ he’s in my palm/ that’s that power back.”

It should be no surprise that Blige is capable of this: She made her name as a ground-breaker, and she can still sound exactly on point, if not ahead of the curve. Her big hit of the '00s, “Be Without You,” fit perfectly into the R&B climate at the time. Earlier this year, Blige appeared on the remix to Disclosure’s “F for You,” showing her smart ear, as well as plenty of business savvy, since Disclosure’s star is rising rapidly on both sides of the Atlantic. The musical climate may be stranger and harsher than ever for a female R&B singer, but Blige isn’t going anywhere.