Please! Can we stop arguing about Gaza on Facebook now?

My feed is flooded from both sides. This isn't a discussion, it's not productive -- and it belittles real tragedy 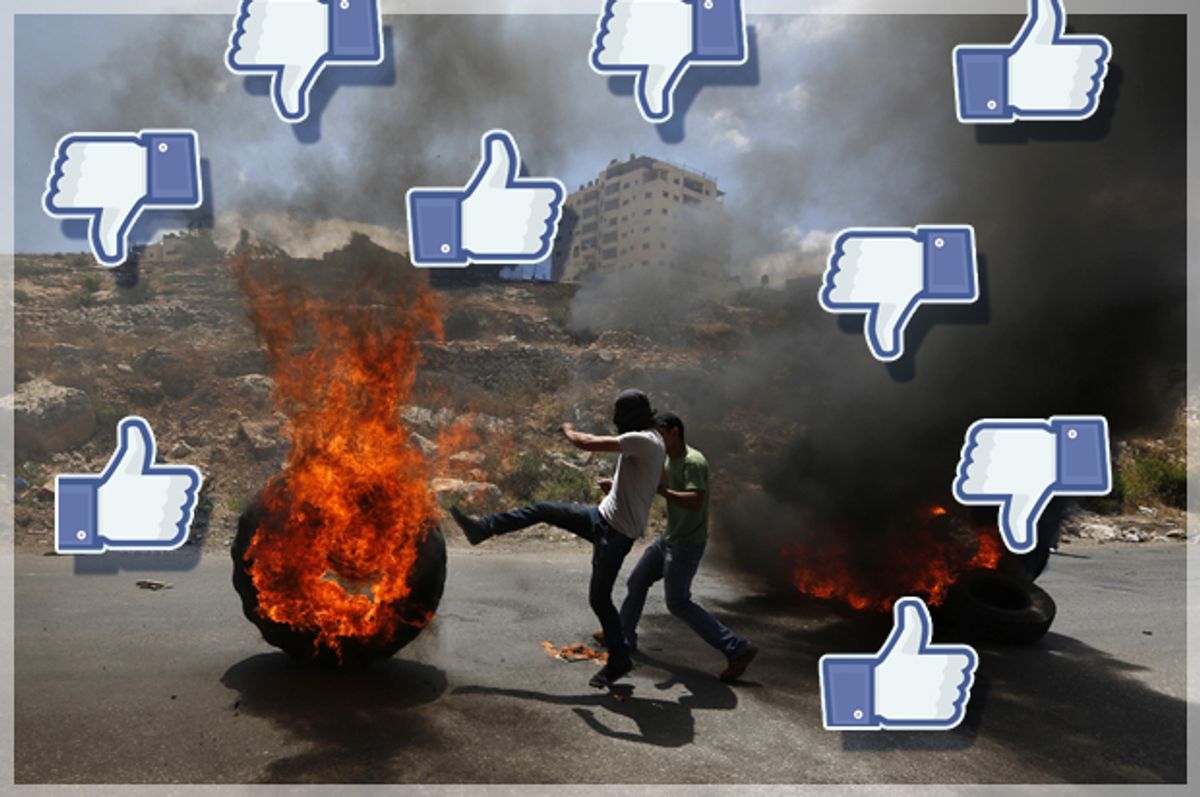 As war wages on between Israel and Gaza, the conflict also continues to play out somewhere much closer to home: my Facebook news feed. And I’m getting pretty sick of it.

Maybe this is especially true for me: a nonpartisan, well-traveled, 20-something Jew with a diverse assortment of politically and religiously aligned friends. But pro-Israel and pro-Palestine posts have been popping up left, right and center — and, when it comes to this issue, people appear keen to reveal their true colors.

While one friend’s status accuses Israel of genocide to Holocaust-like proportions, another reams out Palestinian protesters whose signs are adorned with swastikas.

Gory photos of Gazan children injured by Israel Defense Forces strikes and shells are combated with infographics decrying outrage over Hamas’ use of schools as weapons storage facilities.

A video of Israelis cheering from a lookout point as rockets hit Gaza is matched by a video of Hamas militants warning, “We love death more than you [Israelis] love life.”

For every “Free Gaza,” comes an “Am Israel Chai (long live Israel).” For every offense, a defense. For every tit, a tat. And so it goes, on and on.

Then, below each post, are dozens of comments arguing points we’ve all heard before, citing news articles we’ve all seen before, quoting the same academics and politicians again and again in circles until the two parties either realize their efforts are futile or develop carpal tunnel.

What was once a pleasant jaunt through Facebook is now enough to leave anyone feeling completely bipolar. The only way I know how to respond is: Enough. Or, as Arabs and Israelis would say: Khalas!

If world leaders will not see our posts and they will not actually have a direct impact on the conflict at hand, then we must ask ourselves: Whom and what are they for?

Raising awareness? Sparking discussion? Perhaps. And — don’t get me wrong — I’m a firm believer in the power of discourse and debate. But social media is not a constructive forum for exchanging complex ideologies.

For starters, although some “posters” do have ties to the conflict or, at least, enough knowledge to formulate an educated opinion on it, many do not. To them, this is an opportunity to get in with a certain crowd or show off their aptitude for social issues. It’s all too easy when you can hide behind a screen from the safety of your own home, using Google instead of brain power. Meanwhile, “in a far off land,” very real people are dying. Social media is a place where we treat tragedy as a “trending topic.”

Don’t believe me? How many of the same friends have posted about concurrent Middle Eastern crises of equal or greater measure, such as those happening in Syria or Iraq? That few, huh.

The informed “posters” are not much better. Without the ability to see the expression on someone’s face or hear the tone of his or her voice, how can we expect to garner the compassion necessary for productive dialogue, which involves opening ourselves up to new perspectives and divergent opinions? We can’t.

The proof is in the pudding. Or, rather, the profile. Profile pages tend to be loaded with a stream of similar posts picking apart every media clip, thought, quote and idea that does not fall in line with the individual’s own beliefs regardless of the point’s validity, while glorifying anything that does fall in line with his or her stance — also, regardless of the validity.

It would seem we want nothing more than to prove others wrong, and pat ourselves on the backs for being right. But what if right is not an absolute?  Aren’t we perpetuating the same radical mentality we’re purporting to resolve with our messages?

A scroll through my Facebook news feed wears on my hope for a resolution. As Mark Twain said, “It’s not so much the things we don’t know that get us into trouble. It’s the things we know for sure that just ain’t so.” And if we can’t reach moderation this far from the conflict, how can we expect those closest to it to do the same?

This latest clash between Israel and Hamas has caused explosions on the ground and online. Sadly, this has demonstrated that the fence separating Israel and Palestine isn’t the only type of “wall” building barriers between us.

I simply believe that to have an open heart and an open mind is more effective and more contagious than hitting one’s head against a brick Facebook wall and hoping it breaks.