The truth about anti-Semitism: A liberal millennial's second thoughts

Millennials are not over Israel -- in fact, they're more concerned than ever about hatred and a second Holocaust 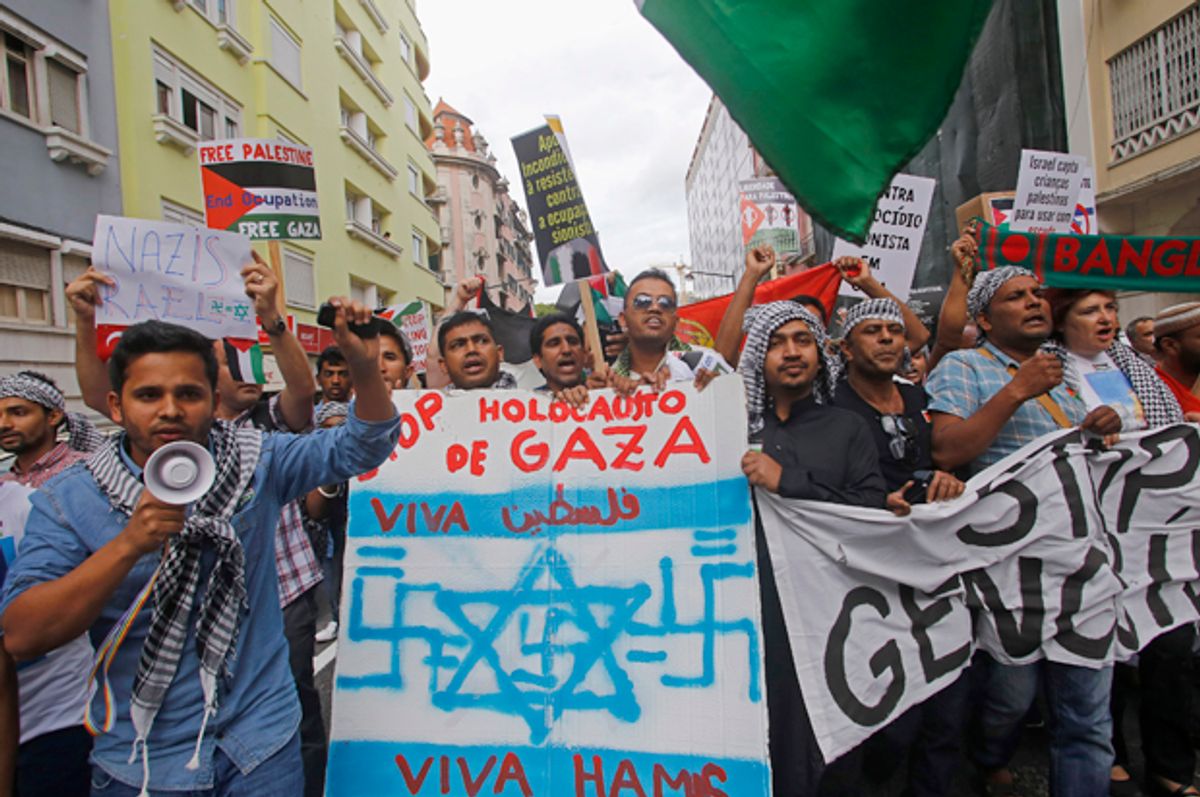 It would be an understatement to say that it’s trying times for anyone even tangentially connected to the state of Israel. As a young Jewish American millennial who has always leaned to the left of the political spectrum, admittedly cultivated in part by a childish urge to stand out in an almost uniformly Republican family, I’ve grappled with my recently altered perspective on Israel in light of increasing anti-Semitism around the world. Having long sneered at my hawkish, Zionist family’s belief that the world will one day turn its back on the Jews—hence the need for a Jewish country where we will always be welcome solely because we’re Jews—I find that I can no longer blithely dismiss my family’s long-held opinion.

The surge in anti-Semitism sweeping across Europe, and the deteriorating argument that it’s a distinct entity from anti-Zionism, has been an eerie reality check for me and many of my Jewish contemporaries. My peers no doubt rolled their eyes, as I did, to the Holocaust survivors in their own families who parroted Zionist talking points, their ominous warnings of inevitable future bouts of anti-Jewish antagonism falling on deaf, carefree adolescent ears. In the Western World in the '90s and early aughts, their dire predictions seemed ridiculously overblown.

Well, my friends and I certainly stand humbly corrected today. The current culture in Europe is eerily reminiscent of the pre-Holocaust era—and this is precisely why I was alarmed to read an essay that appeared on Salon entitled “Millennials are over Israel: A new generation, outraged over Gaza, rejects Washington’s reflexive support.” In it, David Palumbo-Liu, a professor at Stanford University, argues several things, but most notably that the recent rise in anti-Semitism can be explained by the fact that people view Israel as being overly brutal in its war against the Palestinian people.

“It is not because of some essential, primordial racism against Jews. It is because of the actions of the state of Israel in staging a brutal, prolonged attack on the Palestinian people that is replete with violations of human rights and international law. That Hamas has also committed attacks on civilians does not erase the fact that Israel’s violence violates basic international humanitarian laws regarding proportionality.”

Of all the perspectives emanating from the crowded discourse on either side of the issue surrounding Israel and the Gaza War, this essay’s thesis is the scariest, and potentially the most dangerous one, I’ve seen yet. (I discount here that reprehensible op-ed suggesting genocide is permissible to achieve Israeli aims because it appeared on a platform where every schmo can voice his opinion and self-publish it, thereby bypassing any sort of editorial approval, and those editors removed it as soon as they got wind of it. It was the equivalent of your racist aunt Edna ranting crazily at Thanksgiving, if Edna had ever learned how to use a blog.)

By attempting to pinpoint a reason for hatred of Jews, Palumbo-Liu only suggests that there might very well indeed exist valid reasons for hating them—and there are none. No one would find it acceptable had Palumbo-Liu tried to explain why some people hate other ethnic or racial groups, yet because of the negative world view on Israel, there’s no outcry when he rationalizes the existence of anti-Semitism? His thinking ignites a dangerous game and a slippery slope of assigning root causes to baseless hatred.

Israel might very well be an excuse and convenient justification for pre-existing bigotry, but it is certainly not a cogent reason for a person with no previous anti-Semitic tendencies to suddenly find himself nodding along while reading "Mein Kampf." I find it harder to believe that people are suddenly discovering they hate Jews because of Israel and easier to believe that many of these people found Jews distasteful already.

To magnify his erroneous line of thinking is Palumbo-Liu’s inability to distinguish Israel from world Jewry. The two are not one and the same. Despite a Law of Return that grants instant citizenship to every Jew, many Jews have no wish to do claim it, and many Jews have no strong ties or particular pull towards Israel. Does Palumbo-Liu mean to imply that hating those Jews is wrong, but hating the Jews who do support and defend Israel’s right to exist is A-OK? It’s preposterous enough to conflate Israel with every single Jew, as it was similarly preposterous for Americans to conflate their Pakistani neighbors with every jihadist terrorist following 9/11. People who don’t make important distinctions should be held accountable for their feeble and ill-founded reasoning.

Moreover, by devoting a lot of words to laying the blame of today’s ugly anti-Jewish activity squarely on the shoulders of Israel, Palumbo-Liu glosses over the issue of anti-Semitism as an entity that merits serious concern. He proposes that we focus more on why people hate us these days (Israel) and less on our concerns that a second Holocaust might very well be looming. He appears to suggest our fears that the sudden question mark following the universal rallying cry of “Never Again” deserve less introspection, discussion and action than pontificating about what might be the reason for it. Hint: it isn’t Israel.

Tova Ross, a freelance writer, is a frequent contributor to Tablet Magazine. Her work has appeared in the New York Times, Los Angeles Times, xoJane, Kveller and the Forward.