These kids are in hell, and we should be ashamed: Meet the children at the border who want a new life here

Our policies have helped trap these kids in poverty and violence. Now we want to shoot them at the border? 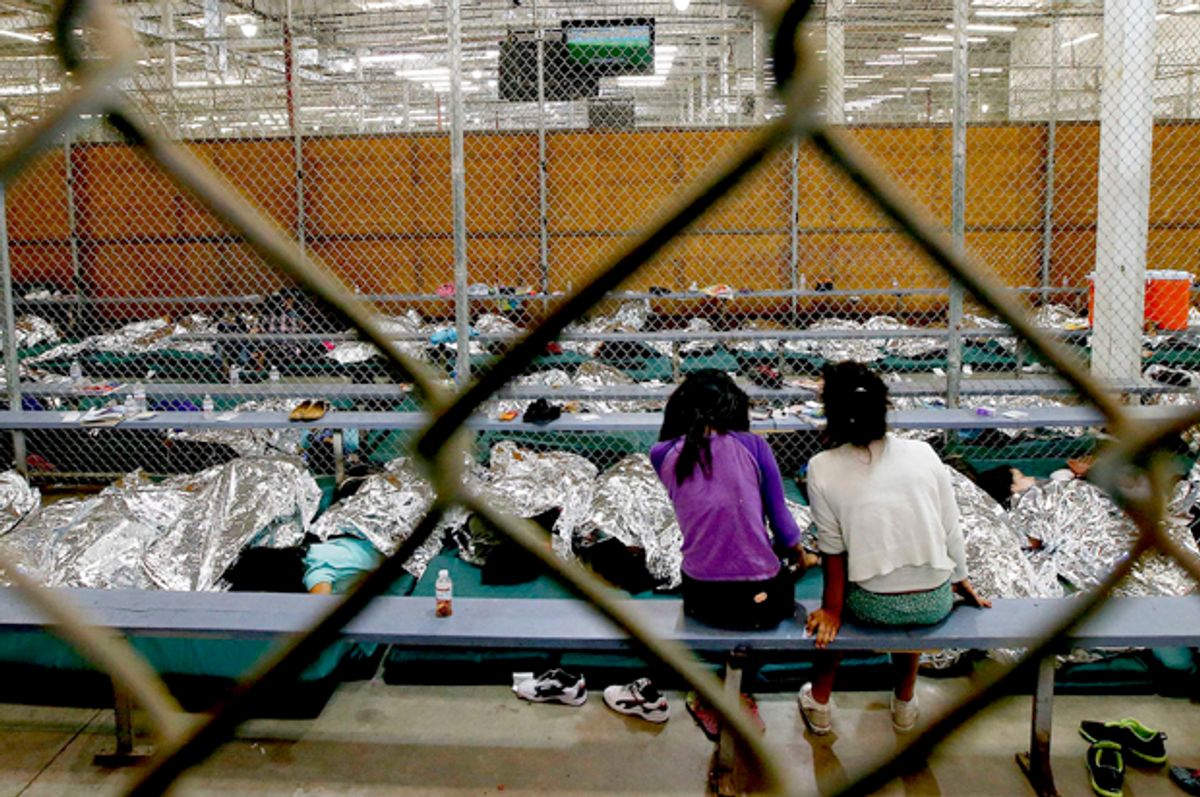 No matter what bone President Obama throws to undocumented migrants in the form of administrative relief in upcoming weeks, our policies of border militarization and deportation will continue to kill.

If you weren’t feeling shameful already, anti-immigrant protests (basically anti-human protests) in the United States have, mind-bogglingly, somehow turned into anti-children protests. And though you might want to hang your head in disgust, be careful, because before you lift your gaze again the government might have already sent armed soldiers to the borderlands to bar more children from finding the safety they’re seeking.

Meanwhile, Mexico, a country riddled with government-sponsored violence and anti-immigrant (again, anti-human) policies, recently announced, under certain pressure from the Obama administration, that they will prohibit undocumented Central American migrants from riding the train, commonly known as The Beast, north toward the United States. The move amounts to kicking the crutches away from an invalid trying to escape a rabid dog. I say invalid not because migrants escaping violence and abject poverty in Central America are weak, but because they are victimized 360 degrees by the vicious onslaught of neoliberal economic policies, brutal gangs, political corruption, failing justice systems and environmental destruction. And I say rabid dog because a foaming snarl is the kindest face either U.S. or Mexican governments are putting on for migrants these days. The New York Times editorial board recently asked what stance we should take concerning child migrants: “Do we spit on them, or give them blankets and beds?” Sadly, the question does not exaggerate the hostility with which a nation of 300 million is welcoming young children frightened for their lives.

These two political acts — the pending arrival of the National Guard to “protect” the U.S.-Mexico border, as well as the prohibition of migrants to board The Beast, amount not to bureaucratic ignorance or political hubris, but to crimes against humanity (technically defined as “particularly odious offenses in that they constitute a serious attack on human dignity or grave humiliation”) whose perpetrators, our supposed leaders, should be tried for in The Hague.

A recent headline in Mexico read: “The U.S. Has Great Compassion for Childhood Migrants; They Will Be Deported: Obama.”

A headline that would equally capture the hypocrisy of Mexico’s migration policy might read: “Mexico Seeks to Protect Central American Migrants: Rip Them Off the Back of One Beast and Feed Them Into the Jaws of Another.”

That second Beast is the hellish gauntlet of kidnapping, extortion, murder and rape that a poor undocumented migrant has to face to cross Mexico on the way to the U.S. Prohibiting migrants from riding on top of cargo trains, however dangerous they are, will leave them even more vulnerable than before, as well as have little effect, if any, in stopping migrants from fleeing the failing/conflagrating states of Central America.

The U.S. and Mexican governments have seemed to stop even bothering to posture toward compassionate migration policies, and have instead enacted anti-human legislation that is currently crushing the backs of tens of thousands of both children and adults alike. Last Friday night Congress doubled down their anti-human policy by voting to repeal the DACA program, which provided legal status and much-welcome/needed relief to young people who were brought to the country as children.

I recently spent a few days at a migrant shelter in Ixtepec, Oaxaca, in southern Mexico, to get a better idea of who are the migrants continuing to push through these increasingly hostile obstacles.

Talking to a huddle of migrants slumped in a spot of shade in the shelter, waiting for their clothes laid out on a bush to dry, a series of explosions rang out. Ixtepec, these days, at least, is a relatively safe city. Though there are certainly still assaults, migrants can generally walk the streets without fear of immigration authorities hassling them. Not sure if the explosions came from gunshots or firecrackers, I asked one of the migrants, whom I’ll call Eduardo. He said, confidently, that they were firecrackers. How do you know they’re not gunshots? I asked. Because gunshots sound different than firecrackers, Eduardo explained. Gunshots are a lot deeper, cracking the air so you can feel them as much as hear them. With firecrackers, meanwhile, you hear their distance instead of feel their bang.

Eduardo knew what he was talking about. He was from San Pedro Sula, Honduras, the city with the highest murder rate in the world. Living in San Pedro, Eduardo heard gunshots ring out almost every day. It was a city where, he explained to me, you get killed not for the money in your pocket, not even for offending a gang member, but merely for not being recognized. If you’re not from a neighborhood, he said, and the gangs don’t recognize you, they think you’re a threat, and they kill you. That’s why he was fleeing. He didn’t want to walk into the wrong part of town and get killed. He wanted a chance.

A Salvadoran man, Hector, who worked delivering eggs in San Salvador, told me that he wasn’t scared for his life in his hometown, but that it wasn’t much of a life to live. There the gangs had ground in the fear so deeply that they hardly needed to make a threat, collecting money extorting from anyone and everyone. From Hector’s meager paycheck, the gangs made him fork over 35 percent of his weekly earnings. He could afford food on the table for his wife and child, but there was no hope for sending his boy to school, and no hope for saving up to move out of his violent neighborhood where the gangs, like a nightmare version of the school bully, turned out his pockets every week. That was why he was migrating, he told me, for a better future for his young son.

Another Honduran, whom I’ll call Josue, started telling me about his own history of violence: He was also from San Pedro Sula, the same city Eduardo was escaping from. Josue had a complicated story about his brother-in-law and his drug habit. When Josue’s sister decided she wanted to leave her husband, the husband threatened that if she did so he would kill her brother, Josue. The sister held out for a while, but finally unable to bear the abuse any longer, she left. The next time Josue came to the neighborhood, his ex-brother-in-law put a nine-millimeter pistol up to his head. Josue, who was walking with a group of friends, told him that he was making a big mistake, that he didn’t want to pull the trigger, and that if he didn’t change his ways, he himself was probably going to get killed. It wasn’t a direct threat that Josue had made, but a number of bystanders heard it. And the prediction, that his ex-brother-in-law would be killed, given the incredible violence in San Pedro, wasn’t improbable.

A few days later, in an unrelated incident, Josue’s ex-brother-in-law was shot point-blank range in the face by a 12-gauge shotgun. When they finally hauled his body away, it was riddled with bullets, barely holding together in one piece. Some neighborhood gang members remembered Josue’s prediction and figured that he had committed the murder, promising revenge not only on Josue, but on his sister and his father as well. There was nothing for Josue to do but flee. He was 20 years old, a young man with no option but to leave his country.

Obama’s requested $3.7 billion spending bill to try to “solve” the border crisis, though unlikely to pass, would primarily do one thing: make it harder and more dangerous for Eduardo, Héctor and Josue to live a dignified life. If any of them do get caught crossing the border, the bill would speed their deportations back to violence-wracked cities where heavily armed, ruthless gangs are looking to kill them, extort them or just drive a fear so deep into their hearts that they can hardly think of anything but trying the journey north again.

A 15-year-old boy I met, whom I’ll call Miguel, escaped Honduras after he was raped by his stepfather. Traumatized, Miguel showed a marked nervousness around adult men, who make up the majority of migrants traveling by rail in Mexico. Not wanting to have to board the train anymore, but without money to pay a bus fare, Miguel went into town one night to try to prostitute himself to raise funds. Nobody at the shelter knows what happened to him that night. Nor has he opened up to the volunteers about his sexuality. Volunteers are currently trying to get him papers to travel safely through Mexico, and doing everything they can to keep him off the streets at night. If he ever does make it to the U.S. border, he might face a Border Patrol agent whose job it is to chase him through the desert and arrest him, or a screaming mob of Tea Partyers telling him he’s not welcomed to the country, or maybe even a soldier with a gun.

The numbers have proved that increased border militarization leads to more migrant deaths. When more children than ever are crossing the border in search of refuge and peace, sending troops to the border is effectively killing children. The governor of Maryland, Martin O’Malley, recently commented, “It is contrary to everything we stand for as a people to try to summarily send children back to death.” And yet that is exactly what we are doing with our politics, both in Mexico and in the U.S.

The first step in helping these people is to stop hurting them.

We need to end the drug war, we need to help rebuild the Central American states we played large parts in breaking down, and, meanwhile, we need to provide a place of peace and refuge for those who are displaced, starting with the children.

John Washington is a novelist/translator currently living in Mexico City. He is the co-translator of The Beast (Verso, 2013), by Salvadoran author Óscar Martinez.  Follow on twitter at https://twitter.com/EndDeportations