This is climate change: Ohio's water crisis was a man-made disaster

Industrial agriculture, invasive species and warming temperatures are all vital parts of this weekend's big story 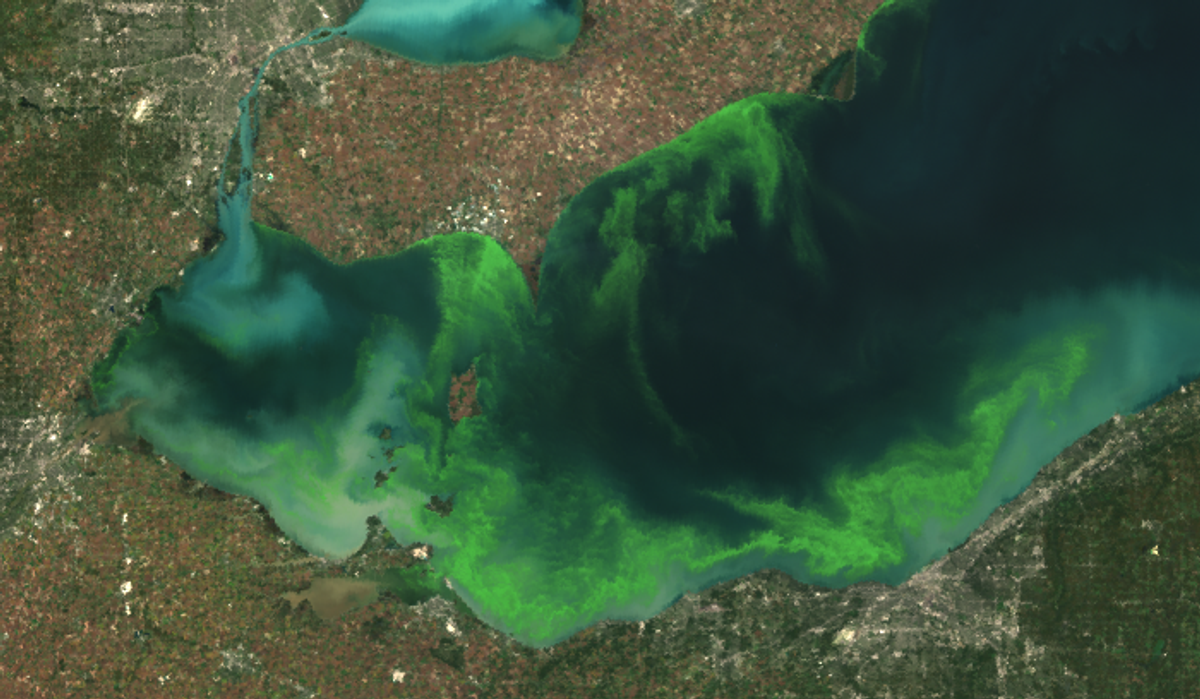 Over the weekend, 400,000 people in northwest Ohio were told that their tap water was no longer safe to drink, cook with or bathe in. Water at a treatment plant had tested positive for dangerously high levels of toxins. Residents were warned that microcystis, the bacteria behind the chaos, can cause skin rashes and burns, along with vomiting, diarrhea and liver problems. It's been known to kill pets and livestock. And boiling water, officials added, only makes the problem worse. Life came, temporarily, to something of a standstill until 9 a.m. Monday when, after extra, precautionary delays, Toledo Mayor D. Michael Collins finally declared the water safe again.

Welcome to life -- weird, chaotic, scary, disruptive -- in a changing climate. The direct cause of Ohio's water problems, according to city officials, was likely an algae bloom in Lake Erie. The cause of the algae bloom? In a word: Us.

The lake, the world's largest freshwater system, has been increasingly overwhelmed by an influx of phosphorus: runoff from industrial agriculture and from urban sewage treatment plants. Meanwhile, summer has been becoming hotter and longer, conditions that promote the algae's spread. An oft-cited study, published in 2013 in the journal Nature, found that those two factors combined are contributing to an increase in harmful algae blooms -- a problem, the researchers added, that's "only going to get worse.”

In Lake Erie's recent history, the worst actually occurred in 2011, when the bloom (picture above) set records and impacted more than half of the lakeshore. Similar events, the NOAA notes, commonly plagued the lake in the 1960s and '70s, until a ban on phosphorous in laundry detergents reduced harmful runoff. Over the past decade, they've returned, and have been steadily increasing. These days, the Guardian notes, fertilizer use in farming is by far the largest contributor of phosphorus to the lake. Climate change, which makes dry places drier (hence, California's drought) also makes wet places wetter -- heavier springtime rainfall in the region is also believed to be contributing to the problem by increasing runoff from farms and sewage systems. Oh, and we also accidentally introduced zebra mussels to the Great Lakes back in the 1980s; the invasive species, which have since taken over the waters, contribute to algal blooms as well by altering the composition of the water.

(It's not just Lake Erie at risk, as ClimateProgress notes: The EPA labels harmful algae blooms "a major environmental problem in all 50 states"; a recent report finds toxic algae in at least a third of 123,000 major U.S. lakes. Vox dug up a 2012 paper that labeled blooms around the world "one of the most serious health risks of the 21st century.")

Most of those factors have obvious, if difficult solutions. The amount of phosphorus allowed to contaminate Lake Erie needs to be reduced. Infrastructure improvements are needed to help sewer systems deal with heavier rainfalls without overflowing and further polluting waterways. Reducing our reliance on fossil fuels, important for many reasons, also counts here, because if global warming continues on its current course, summers in Toledo could be up to 10 degrees hotter by the end of the century.

"There's a systematic challenge we face here in the Great Lakes region that's much bigger than the current water crisis in Toledo," said Collin O'Mara, president and CEO of the National Wildlife Federation, emphasizing the role of climate change to reporters. "If we don't get our arms around it, we will see property values decline, tourism decline, and wildlife impacted, too. I encourage everyone to consider the broader issues."

What happened this weekend in Ohio can't be called a natural disaster -- the handprints of human activity are all over it. It also can't, in good faith, be said that climate change caused it -- no more than it can be said that it caused natural disasters like California's drought or last fall's deadly typhoon in the Philippines. But you'd better believe that climate change is an important part of all of those stories: As the U.N.'s Intergovernmental Panel on Climate Change concluded earlier this year, climate change is a "threat multiplier": it's takes existing problems, and it makes them worse. Miss that, and you're missing the whole story.