Thomas Friedman has no soul: The New York Times' quasi-journalistic Wall-E does it again 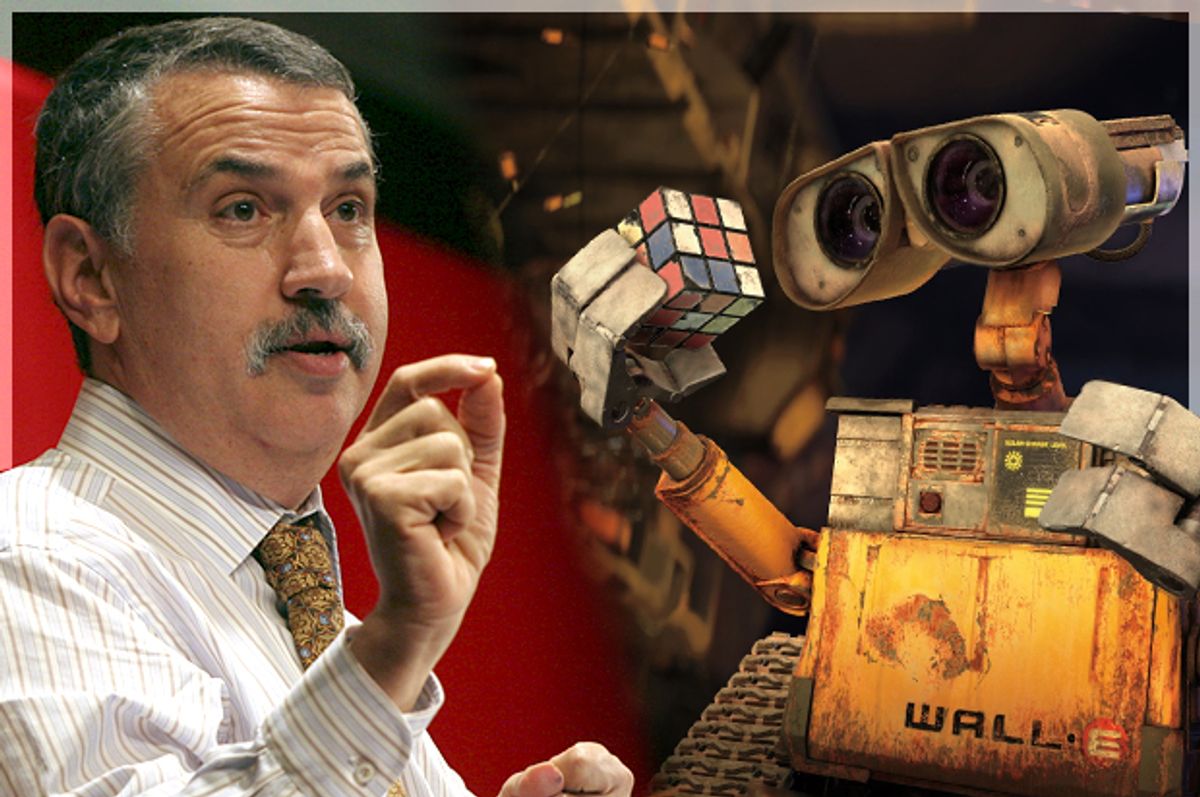 After our last disquisition on Tom Friedman we thought we were through with him for good. But the violations of decency have become too great, or our spirit has grown too weak. Whatever the cause, a soul cries out at last:  In the name of all that is decent and holy, will this man never stop?

The latest outrage is a column about Madagascar titled “Maybe in America,” and it goes beyond parody – and even beyond that entertaining automated Tom Friedman column generator someone created a while back – to give us a distillate of Friedman in his purest form.

Friedman has usurped the column generator’s role. In the globalized and digitized world he celebrates, he seems to have finally outsourced himself. After all, who but an offshored and cloud-based cybernetic columnist could have written these words?

“It’s not easy being a country anymore. There is no more Cold War to prop up, arm and finance frail states. More important, the combined pressures of the market (globalization and the speed with which investment can flow into countries doing the right things and out of those doing bad things), Moore’s Law (the steady rise in computing power that makes every good job today require more education) and Mother Nature (climate change, biodiversity loss, erosion and population growth) have all passed certain tipping points.

To which every sentient, flesh-and-blood creature on the globe can only respond: Say what?

No, really. How does one even begin to digest this lightly tossed salad of half-baked and julienned ideas? Let us begin with this sentence:

“It’s not easy being a country anymore."

Sweet Jesus. Thomas Friedman is now more capable of empathy toward a “country” – that is to say, toward an arbitrary product of armed conflict, geography, economy and law – than he is toward his fellow human beings. The proof of that resides in the remainder of his column, which laments the breeding habits of Madagascar’s citizens – yes, we're told there are far too many of them – and the resulting environmental damage, without once expressing direct concern for that nation’s impoverished inhabitants.

That’s decent descriptive writing (except for the dissonant and careless "mess"). And yet Friedman never describes even a single inhabitant in detail. Sure, he mentions one or two. They’re hastily sketched figurines, introduced to serve as avatars for favored Friedman ideas. But describe them, as living persons having human interactions? No.

Since Friedman doesn’t describe the people of Madagascar, we’ll do it for him: They’re poor. They are many other things, of course, since they exist in the full dimensionality of human experience. But they are very poor. In fact, the World Bank’s Poverty Profile for that nation explicitly says that “Madagascar is among the poorest countries in the world.” This is a fact Friedman mentions only in passing, without either the statistical or the descriptive detail that might heighten that stark reality for his readers.

The World Bank is hardly a bastion of bleeding-heart do-gooderism. And yet, unlike Friedman, the global lender readily notes that 70 percent of Madagascar’s people live in poverty – and that 59 percent are “extremely poor.” Nearly one infant in 10 dies before his or her first birthday. The impoverished majority suffers from high rates of malnutrition and often lacks access to safe drinking water.

Think it’s hard being a country nowadays? Try living in one.

Why is Madagascar so poor? Friedman’s mum on the topic, except for something about “Chinese merchants working with corrupt officials to illegally import everything …” (That should read “export,” since he’s writing from Madagascar.) Friedman ignores the role the French, and later the IMF and the World Bank, played in shaping the island’s current economic condition.

That condition, in which 90 percent of the population lives on $2 a day or less, can hardly be blamed on China. But that other “c” word – “colonialism” – is unlikely to pass Friedman’s lips.

“Nothing he does will be more important than preserving what is left of Madagascar’s pristine beaches, forests and plant and animal species (particularly its lemurs), among the most rare and diverse in the world.”

Like Friedman, we are gravely concerned about the environment. Like him, we worry about lost biodiversity and our endangered planetary future.  And we value lemurs, as we value all species. But ponder his priorities and weep. Nothing, in Friedman’s mind, will be more important for the new president. Not providing drinkable water, or ending starvation, or helping more babies live long enough to utter their first word.

“Parks and reserves have been set aside by the government,” he writes, “… but they will only be sustainable if they are supported by ecotourist lodges and guides who are drawn from local communities and incentivized to protect their natural capital.”

Ecotourism. In the midst of devastating poverty, the priority in Friedman’s mind is ecotourism. He continues (as you knew he would):

“But that takes a government able to expand protected areas, build proper roads (rural roads here have more potholes than pavement), crack down on illegal logging and provide credit to rural communities.”

It also takes a population that isn’t starving to death, one in which parents aren’t routinely cradling their children in their arms as the little ones draw their dying breaths. Such people are not as interested in the long-term prospects for ecotourism as they are in making a living in whichever way might present itself before the next infant dies.

Global wealth inequality is, in fact, a major challenge to environmental protection. The poverty of local peoples makes the preservation of environmental resources a luxury they feel they cannot afford, since such resources are typically either edible, drinkable or sellable. This is an understandable position, and it's why eco-policing an impoverished majority will always be a losing battle. The more efficient – and more just – approach is to eliminate the poverty that drives desperate people to despoil the land.

But addressing that means confronting certain economic truths – truths the Friedmans of the world prefer to paper over with feel-good nostrums about “involving communities in ecotourism.” Yes, such efforts are pleasant, and sometimes even laudable. But ecotourism can’t solve the problems of global poverty, any more than AirBnb and the so-called sharing economy can solve the problems of poverty and growing wealth inequality in Friedman's native United States.

Oh, right. He believes that too.

But, then, Friedman has a seemingly endless supply of Silicon Valley and Wall Street delusions like these from which to draw. If future anthropologists ever publish a treatise on “Myths and Superstitions of the Early 21st Century Global Elite,” we can be certain the work of Thomas Friedman will be prominently featured. He is both priest and acolyte in the cult of financialized globalization. That’s the creed whose adherents worship a techno-economic force that administers collective punishment or reward like a blind and vindictive (but ruthlessly efficient) deity.

Consider the first paragraph we quoted, the one where Friedman proclaims that  globalization involves “the speed with which investment can flow into countries doing the right things and out of those doing bad things.”

Goodness, in the words of Mae West, has nothing to do with it. That speedy stream often goes the other way, in fact, especially given the growing influence of the world’s financial sector. There is no relationship between virtue and capital flow, other than perhaps an inverse one, and to think otherwise is to reveal oneself to be a deeply neoliberal ideologue.

And what about “the steady rise in computing power that makes every good job today require more education”? Friedman seems to have overlooked the steady decline in union membership and worker bargaining power in his native land, a trend that has had a much more direct effect on wages there. Moore’s Law applies to computer chips, not human beings. And while automation will be a growing problem in the future, not everyone will need to be a computer scientist – nor will there be enough work to support a global population consisting solely of tourist guides and app designers.

What we will need are policies that provide for a fair economy, ones that promote job creation and stronger wages. But that agenda lacks the chic affect one can adopt by citing Moore’s Law, an old engineering saw that postulates that the speed of the microprocessors powering our computers will double every two years for the foreseeable future.

So will the bullshit, apparently.

If the eradication of wealth inequality isn’t Friedman’s global agenda, what is? The answer remains buried within his psyche, but his opening paragraph offers us a glimpse:

“I’ve been arguing that the big divide in the world these days is between the world of order and a growing world of disorder. If you’re keeping score at home, the world of disorder just added another country: Libya. America quietly folded up its embassy in Libya last week and left, leaving behind a tribal/militia war of all against all. Not good.”

Concludes Friedman, ominously: “There will be more of this.”

So entropy, not equality, is Friedman’s endgame. But the world does not divide itself as easily as he imagines. And Friedman seems blissfully unaware of the eminently unsavory philosophical resonances behind his Manichaean division of the globe into spheres of “order” and “disorder.” Which resonances are those? Cue up the Wagner on your Spotify app and ponder it awhile. We're not saying these overtones are intentional, but better care should be taken.

And then there’s that refrain:  “It’s not easy being a country anymore.”

Yes, it’s come to this. Tom Friedman has now been fully deployed as an empathetic and sycophantic sidekick to nonhuman entities. The objects of his solicitude and devotion include new technologies, trendy if vapid ideas – and now, even the anthropomorphized souls of sovereign and suffering nations. We fear that soon he'll be found on all fours amid a starving crowd in some distant oasis, weeping tender tears for an unpopular trade treaty or murmuring words of comfort to a rusty pair of traveler’s binoculars.

Tom Friedman seems incapable of growth or self-reflection. He's like some semi-autonomous robot, a quasi-journalistic Wall-E perpetually scouring the ruins of our world for raw material with which to fabricate exculpatory fables for distant and corpulent masters. And like the automatons of fiction, he will persevere. We see that now. He will never tire of this work. He will never stop. The verbiage will flow on and on, bleeding into the Betsiboka River, bleeding into Mahajanga Bay, bleeding into the Indian Ocean. Astronauts will see it from outer space.

We have been warned: There will be more of this.