The evidence keeps building that Texas covered up its execution of an innocent man. Oh well! Isn't he dreamy? 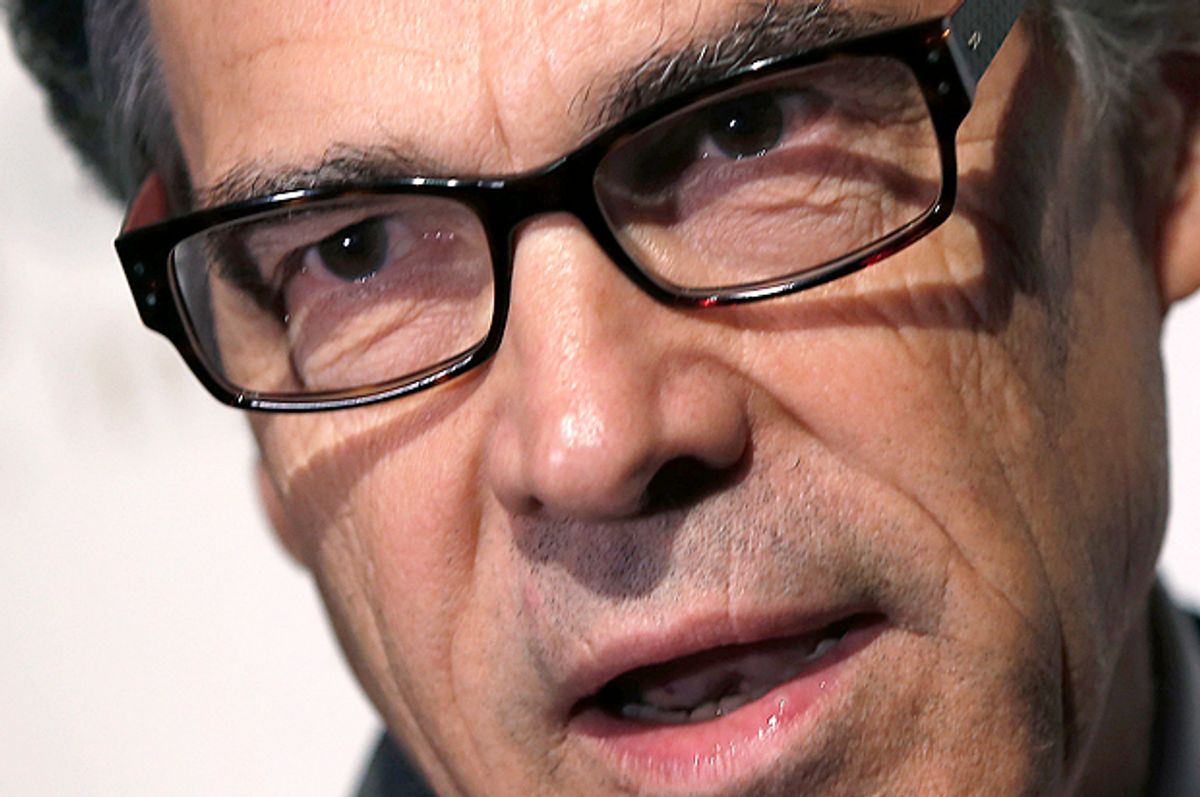 Rick Perry is just so ... adorable. And hardworking. And charming!

Did you know this? It's the gist of a big long profile of "The New Rick Perry" in National Journal, the latest in a series of Rick Perry Is Adorable pieces to have emerged as the longtime Texas governor mulls another presidential run. The last one didn't get very far, mostly because Perry hadn't prepared and was all drugged up following back surgery and also isn't a very bright guy. But the New Rick Perry is ready for the next sucker, according to this puff piece published in National Journal, which opens with a 10-million-word explanation for why Rick Perry now wears eyeglasses, and then offers credulous passage after passage. "The new Perry isn't just working harder than his 2012 incarnation. He's also seeking to occupy a different political space," the author, Michelle Cottle, writes. "Last time, Perry ran as a conservative firebrand. This time, with Cruz and others sucking up all the oxygen on the right, he is trying out a new message. Forget the wild-eyed cowboy squawking about how Texas might be forced to secede from the union. Today's Perry is pitching himself as a thoughtful, seasoned elder statesman." Sure he is.

And does Cottle mention how charming Rick Perry is?

• "One Perry asset that was largely obscured in 2012 is just how charming he can be one-on-one."

• "Whether or not you find him good-looking, it's tough not to at least find him personally charming."

• "You can tell that, even as he deploys his innate, somewhat free-wheeling charm, Perry is also mindful of the need to tread carefully."

He is, in sum, a dreamboat: "Looking especially presidential — gray suit, burnt-orange tie, and, at 64, still the best head of hair in politics — he bounced from topic to topic, but kept returning to a couple of overarching themes."

Around the same time that National Journal was publishing this press release from Rick Perry's political team, the Washington Post was publishing a piece of journalism regarding a case with which Perry is well familiar: the execution of Cameron Todd Willingham, who was convicted of burning his house down and murdering his three young daughters trapped inside, and ultimately put to death in 2004.

The Willingham case -- which is not mentioned once in Cottle's lengthy Perry profile -- has not aged well. Forensic experts have settled around the conclusion that the fire was not arson and more likely the result of an accident. When Perry was governor, he dismissed last-minute appeals to stay Willingham's execution. He's also fired members from and gutted the Texas Forensic Science Commission who've cast doubt and tried to hold hearings on the matter.

The case against Willingham relied not just on phony arson experts who didn't know what they were talking about, but also on testimony from an inmate who claimed that Willingham spontaneously confessed the crime to him in prison. The prosecutor, John Jackson, has for years denied that he offered the inmate witness, Johnny Webb, anything in return for his testimony. But new evidence in the Post story, in the form of letters between Webb, Jackson and others, shows pretty clearly that Jackson offered Webb a lot -- a reduced prison sentence and cash from a wealthy rancher friend -- and spent years trying to secure those things for him.

Newly uncovered letters and court files show that Jackson worked diligently to intercede for Webb after his testimony and to coordinate with the rancher, Charles S. Pearce Jr., to keep the mercurial informer in line.

“Mr. Pierce and I visit on a regular basis concerning your problems,” Jackson wrote to Webb in August 2000, eight years after the trial, when his former witness was threatening to recant. (Jackson misspelled the rancher’s last name.) “We worked for a long time on a number of different levels, including the Governor’s Office, to get you released early in the robbery case. . . . Please understand that I am not indifferent or insensitive to your difficulties.” [...]

Jackson’s campaign for Webb’s early release escalated in May 1996, after Webb reported that he continued to receive threats and demanded to be transferred to federal prison or the Navarro County Jail.

“Here the state offered me certain benefits in exchange for my testimony which resulted in sending a man to death row,” Webb wrote to Jackson. “Because I kept my end of the promise, the state is bound to uphold theirs until my release from incarceration.”

What we have here is further evidence that the Willingham trial was a joke and that the state, when led by Rick Perry, may well have executed an innocent man, something that Perry has exerted a lot of energy trying to cover up. This should be very bad for Rick Perry if he runs for president, again.

But in a Republican presidential primary, sadly, it probably won't be.

The Willingham stuff was never really damaged Perry when he ran in 2012. When the death penalty was brought up in one of Perry's first debates, the governor responded: "In the state of Texas, if you come into our state and you kill one of our children, you kill a police officer, you’re involved with another crime and you kill one of our citizens, you will face the ultimate justice in the state of Texas, and that is you will be executed." The applause was so raucous that moderator Brian Williams had a difficult time asking a follow-up.

None of Perry's rivals ever had to bother pressing the Willingham scandal during the rest of Perry's disastrous, short-lived campaign -- dispatching with Perry didn't require much else besides letting him talk. The last time a Perry rival did try to use Willingham against him, however, was in the 2012 Texas gubernatorial primary. The coverup at the Texas Forensic Science Commission was in the news. This is how Perry's challenger, Sen. Kay Bailey Hutchison, tried to attack Perry in a statement:

“As hard as Rick Perry’s office and his campaign may try to divert from the issue, this is not about one man or one case. The issue is Rick Perry’s heavy-handed politicization of a process and Commission established by the legislature to provide critical oversight. First, Rick Perry delayed the formation of the Texas Forensic Science Commission, then he tried to ensure it didn’t have funding and when all else failed, he fired everyone he could. The only thing Rick Perry’s actions have accomplished is giving liberals an argument to discredit the death penalty. Kay Bailey Hutchison is a steadfast supporter of the death penalty, voted to reinstate it when she served in the Texas House and believes we should never do anything to create a cloud of controversy over it with actions that look like a cover-up.”

You'll notice that Hutchison's campaign didn't hit Perry forthrightly for, well, presiding over the execution of an innocent man. It hit Perry for giving liberals an excuse to whine about the death penalty, as though that would be unwarranted.

Why did Hutchison's team dance around the issue? As we found out later, it was because her campaign had focus grouped various Willingham messages and found that the "killing an innocent man" thing somehow helped Perry among Republicans. Emphasis ours:

Veterans of Sen. Kay Bailey Hutchison’s unsuccessful 2010 primary challenge to Perry recalled being stunned at the way attacks bounced off the governor in a strongly conservative state gripped by tea party fever. Multiple former Hutchison advisers recalled asking a focus group about the charge that Perry may have presided over the execution of an innocent man — Cameron Todd Willingham — and got this response from a primary voter: “It takes balls to execute an innocent man.”

If Perry runs in 2016, who's to expect anything different in the primary campaign? He may have executed an innocent man, sure, but that was awesome. And besides, he's so charming. Have you heard that he's charming?