The man who brought America inside the minds of Einstein, Franklin and Jobs takes issue with modern-day tech hype 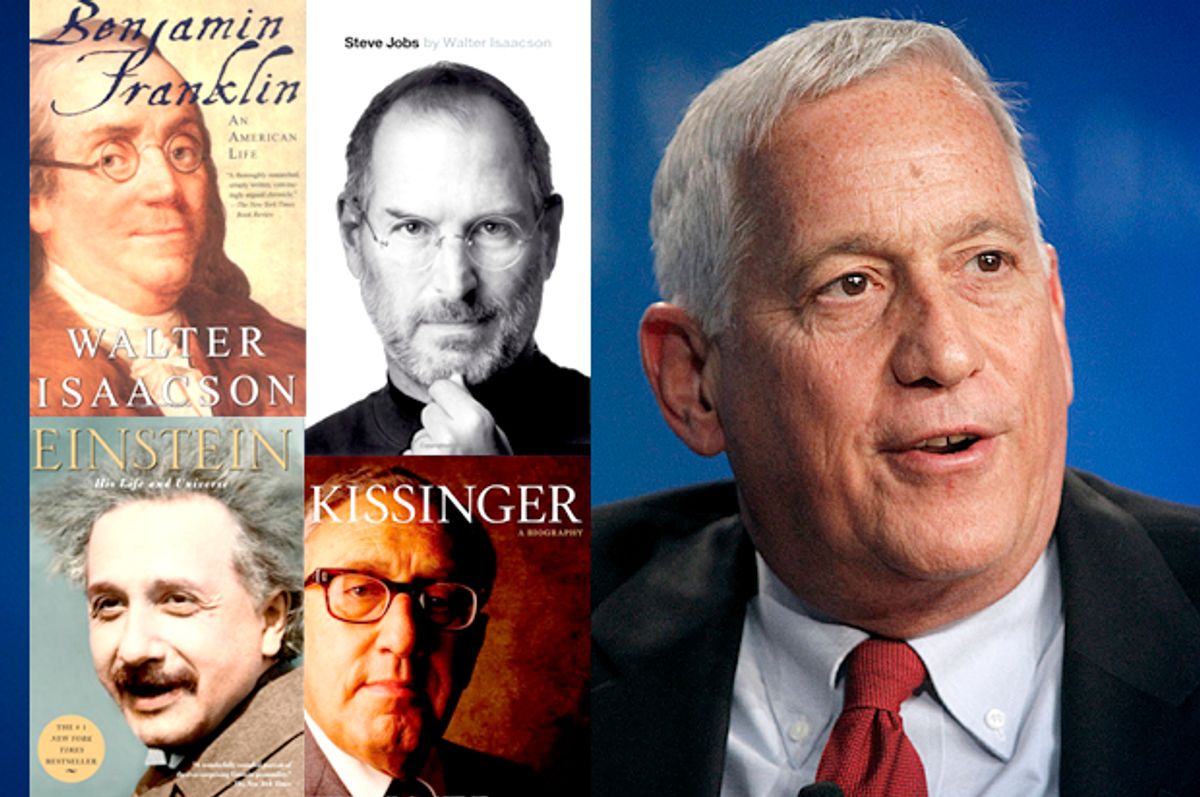 If anybody in America understands genius, it's Walter Isaacson.

The bestselling biographer has chronicled the lives of everyone from Benjamin Franklin and Albert Einstein to Henry Kissinger and (most recently) Steve Jobs. In the process, he has garnered a reputation as a writer deeply attuned to the idiosyncratic -- and sometimes megalomaniacal -- personalities and predilections of singularly brilliant men. But genius alone, as he would probably be the first to point out, actually isn't enough to change the world.

We live in a time when technology companies -- from Google and Apple to the burgeoning start-up community that's taken Silicon Valley by storm -- have staked a place at the center of the American culture. And the idea of innovation, how an idea translates from mind stuff into tangible reality, has consequently become shrouded in a mythology about genius and grit -- brainiacs with a golden idea holed up in a dingy garage, working in obscurity before taking the world by storm -- that is emotionally appealing but short on nuance. The truth of the matter, as Isaacson has pointed out, is that what makes for a genuine, world-changing innovation is much more complicated than a towering IQ. In reality, execution is everything.

Isaacson's new book, "The Innovators: How a Group of Hackers, Geniuses, and Geeks Created the Digital Revolution," slated for release in October, explores how disruptive change really comes to fruition. Salon spoke with him earlier this summer about the nature of innovation, and how it's often misunderstood. This interview has been edited for length and clarity.

First let’s start with something big: What do you think is the greatest issue facing our time?

Right now I think that inequality of opportunity. I think ever since the days of Benjamin Franklin the basic American philosophy – the basic American creed has been if you work hard and play by the rules you can be secure. And we’re losing that these days because of unequal education and because of unequal opportunities and inequalities in wealth.

And I would say that the most important element of that is creating better educational opportunities for all. I think that it used to be … well. I think that every kid should have a decent opportunity for a great education and we don’t have that at the moment.

I wanted to talk to you about how you define innovation because you have written about so many innovators. And the terms “innovation” and “innovator” are sort of the terms of our time. Everything is described in this way.

I think that the word “innovation” has become a buzzword and it’s been drained of much of its meaning because we overuse it.

For the past 12 years I’ve been working on a book about the people who actually invented the computer and the Internet. I put it aside to work on the Steve Jobs biography, but I went back to it, because I wanted to show how real innovators actually get something done.

So instead of trying to be philosophy or simple rules of innovation, I wanted to do it biographically to show you how people you may never have heard of, who invented the computer and Internet, actually came up with their ideas and executed them, because I think when we talk about innovation in the abstract, it loses its meaning.

Innovation comes from collaboration, it comes from teamwork, and it comes from being able to take visionary ideas and actually execute them with good engineering. And there’s no simple buzzword definition of innovation; I think it’s useful, as somebody who loves history, to just focus on real people and how they invented things, and that includes the computer, the Internet, but also the transistor, the microchip, search engines, and the World Wide Web. And there were real people who worked in teams and were able to execute on their ideas and I wanted to tell their stories, based on a dozen years of reporting what they did, instead of some abstract theory of innovation.

I began working on this book 12 years ago, mainly focused on the Internet, but after writing about Steve Jobs and interviewing people who’d been involved with the personal computer, I decided to make it a book about the intersection of digital networks and the personal computer, and how people in that field actually executed on their ideas. I’m not interested in how-to manuals about the philosophy of innovation. I’m interested in real people and how they actually succeeded or failed.

Like Ada Lovelace, who I've read that you feature prominently in your new book.

Yeah, Ada was the person who connected art to technology in the 1840s. Her father was the poet Lord Byron, her close friend was Charles Babbage, who invented the analytical engine, and she was able to understand how you could program a mechanical calculator to do more than just numbers. That it could weave patterns just like the punch cards that helped mechanical looms weave fabric, and that’s the first example in my next book of how real people went about connecting the arts and technology to new innovative things.

I start with her, but it goes all the way through the history of people we’ve never paid enough attention to because the people who invented the computer and the Internet were not lone inventors like an Edison or a Bell, in their labs saying, “Eureka!” They were teams of people who worked collaboratively, and so I think sometimes we underestimate … or sometimes we don’t fully appreciate the importance of collaborative creativity. So my book is not a theoretical book, but it’s just a history of the collaborations and teamwork that led to the computer, the Internet, the transistor, the microchip, Wikipedia, Google and other innovations.

In writing this book over the past 12 years, and in your other books on Albert Einstein and Steve Jobs and Ben Franklin, have you noticed any patterns or any similarities? Anything you start to pick up and think, “Oh well that’s very similar between these two, maybe that makes a good innovator”? You’ve mentioned the teams and the collaboration …

Yeah, there’s not one formula, which is fortunate for those of us that write biographies, otherwise you wouldn’t need a lot of biographies. Albert Einstein was much more of a loner, whereas Ben Franklin’s genius was bringing people together into teams. Steve Jobs' genius was applying creativity and beauty to technology. But the one thing they had in common is they were all imaginative. They all questioned the conventional way of doing things. And as Einstein once said, imagination is more important than knowledge. And that’s sort of been a theme of all of my books.