Give me doughy lovable Chris Pratt

Why is everyone obsessed with the "Guardians of the Galaxy" star when he's acting douchier than ever before? 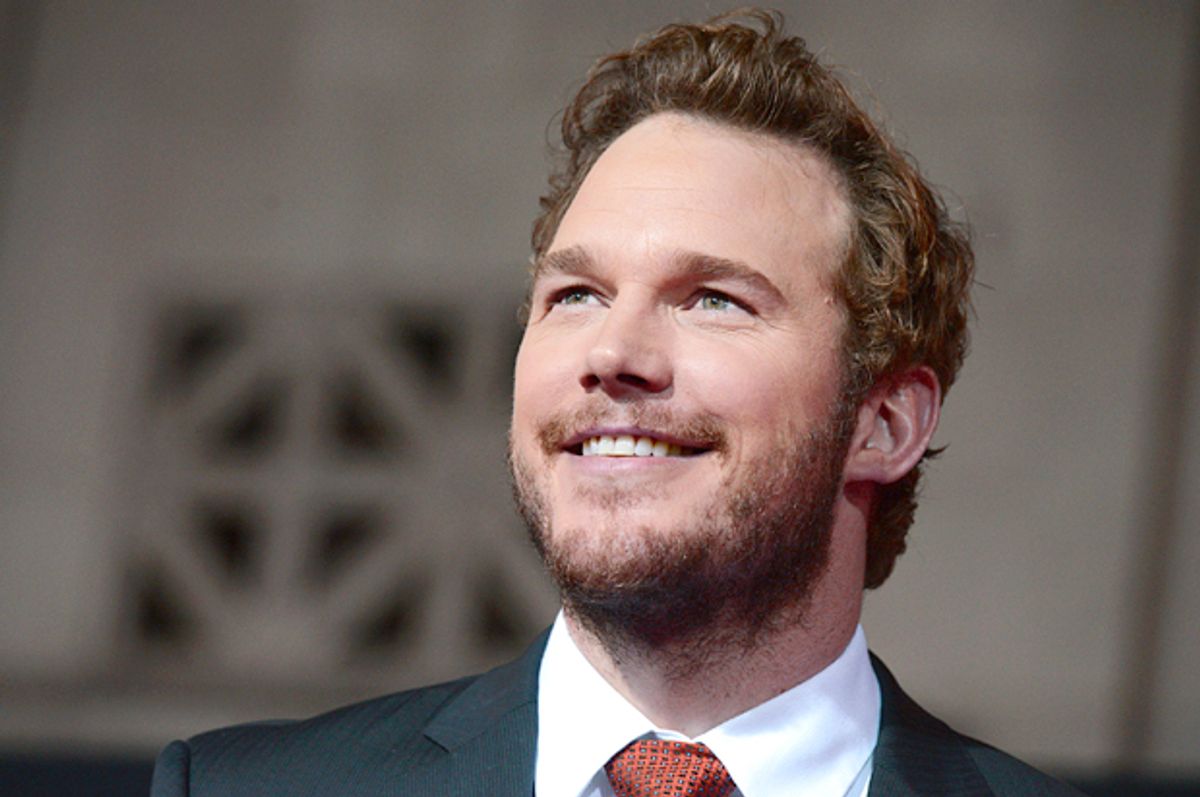 These days, everybody seems to love Chris Pratt. Recent headlines include “Chris Pratt on going from slob to film heartthrob” and “Chris Pratt goes from zero to hero.” Us Magazine reports that Pratt has “transformed from a lovable Parks and Recreation goofball to a bonafide, hunky male lead," and suggests that with his new "buff physique" Pratt "could be the new sexy A-Lister we’ve all been waiting for." A  Men’s Fitness cover story announces: “Today he is leaner, more muscular—even his face is chiseled.” Others have declared that "the formerly fat funnyman has rebuilt his body" and is "quickly becoming one of the silver screen's favorite leading men." Says another reporter, "It's hard to tell what's more astonishing: Chris Pratt's transformation from mid-level comedy actor to full-blown movie star, or the chiseled physique that's come with it."

All this for an actor who has starred on a critically acclaimed (if low-rated) sitcom for years and had meaty roles in such blockbusters as "Moneyball," "Zero Dark Thirty" and "Her." Yet he's only now inspiring bloggers to round up his most charming media appearances and wax poetic about his rapping abilities. Even Clickhole got in on the action. In case you hadn't heard: the 35-year-old replaced his beer gut with rock-hard abs for the new box office hit "Guardians of the Galaxy," and suddenly the salivating media seems to think they've just discovered him.

Sure, his meteoric rise is partly the result of an exceedingly well-oiled Hollywood P.R. machine plugging its leading man. But for those of us who were introduced to Pratt long ago through "Parks and Recreation," this is confusing. Oh, that guy? He's been charming for years! And here is the weird thing: While Pratt is ascending to the role of pop cultural darling, he's actually been acting douchier than ever before.

He posted this inexcusable Weiner-esque mirror selfie. Also, this one. It's the kind of narcissistic shenanigans that other -- dare we say female -- stars would be roundly derided for. Usually, when the media does this much emphatic fawning over a body it belongs to a woman, especially when extreme weight loss is involved. Of course, when it's a man, weight loss isn't enough; there has to be muscle gain too. In Pratt's case, his abs are literally making headlines (see: "Chris Pratt's New Abs-olutely Killer Body"). In fact, his abdominals have been referred to as -- and I quote -- “historic.” People magazine has dubbed him "the perfect guy" because "he can turn a beer belly into a six-pack on command.” Some have gone so far as to call him “the new Jennifer Lawrence," in other words, America's new sweetheart.What happened to the self-effacing jokester who paraded his beer gut in patriotic swim trunks, doing goofy leg stretches for the paparazzi?

In an interview with ABC, Pratt said of the "GotG" team, "They would send someone over to my house to measure me every week. They would send me prop guns ... I would take a picture with it, pose with the gun so they could see how it looked in my hand. Meanwhile, what they're secretly doing is, 'How fat is Chris, still?'" Recently, he wrote a Facebook post thanking Men's Fitness for putting him on the cover to promote the movie and, he added in parentheses, "to promote my new arm titties." The only way he can characterize the response to his new guns is to compare them to a female body part! In his case, it's a startlingly accurate analogy: he's courting the sort of body-fascination usually reserved for Kim K's derriere.

Of course, Americans can't resist a good before-and-after. Hollywood producers know it and are more than willing to exploit that for ticket sales. I detect something else at play, though, and it's straight-male fantasy. On "Parks and Recreation," Pratt's character, Andy Dwyer, is the embodiment of the beer-drinking, video-game-playing aimless masculinity that has become the subject of so much hand-wringing in recent years. Pratt's physical transformation from couch potato to superhero is the fairy tale for our time (and it's exactly what dudes who are into Marvel want to see). I can't speak for all women, of course, but I would take the beer belly over those shirtless selfies any day.