Yes, the Tea Party Senate candidate went down -- but, once again, the incumbent only won by mimicking the Tea Party 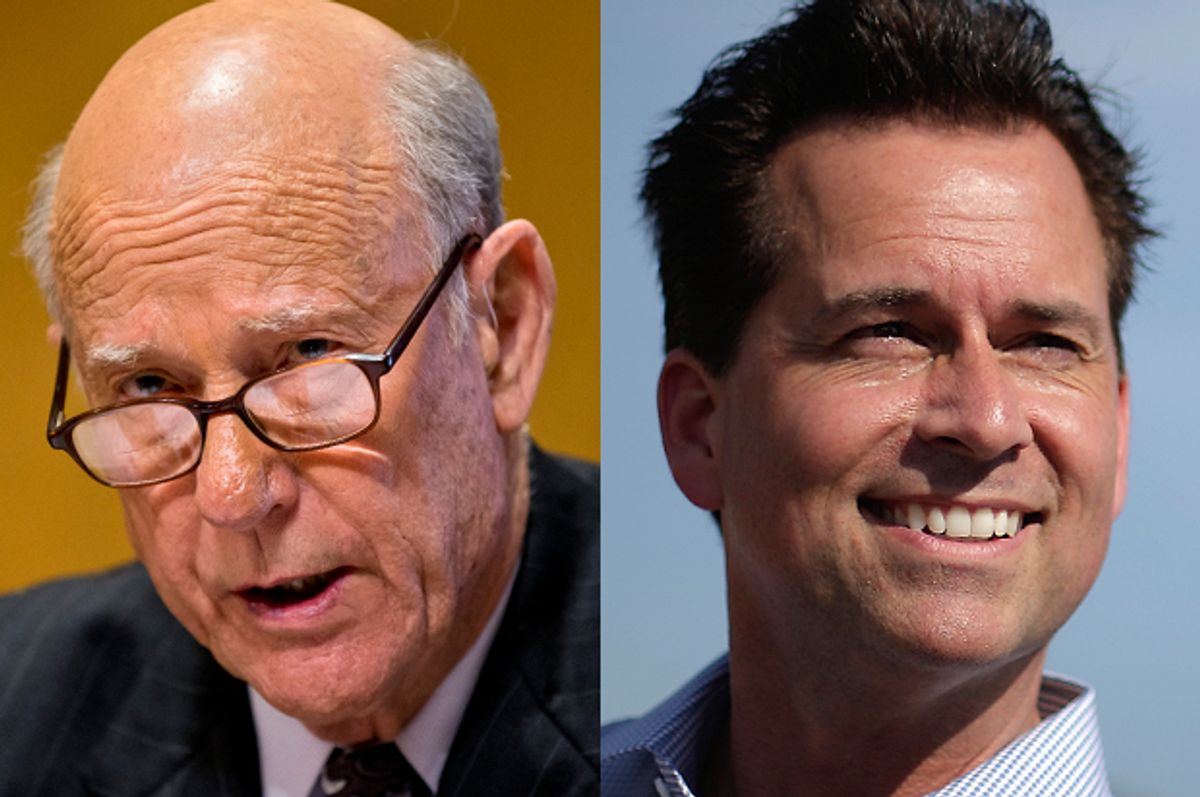 It's been a little while since we last checked in on the GOP Senate primary season's "Tea Party vs. Establishment" narrative meter. Is the Tea Party Stronger Than Ever This week, or has the Establishment Buried the Tea Party Forever? After last night's primary in Kansas, in which incumbent Sen. Pat Roberts defeated 43-year-old radiologist Milton Wolf,  the needle is pointing pretty much where it's been all year: The Establishment Has Defeated the Tea Party By Adopting the Tea Party Ethos and Platform Entirely So It Doesn't Really Matter.

The Kansas primary was another instance in which there was little policy or ideological daylight between the "Establishment" candidate and the "Tea Party" candidate -- they were both exploring new frontiers approaching the edge of the right-wing universe. Again, this was largely a turf war between Washington-based proxy groups, in which NRSC was doing battle with the Tea Party Patriots and so forth.

There are two things that every story about Milton Wolf mentions: first, that he's a second cousin of Barack Obama. So nuts! Ha ha... ehh. The second is that he posted X-rays of gunshot victims online and then made fun of them with people in the comments. Which is not the most ethical behavior for a medical professional? This was the "best" one:

“One of my all-time favorites," Wolf posted to the Facebook picture. "From my residency days there was a pretty active 'knife and gun club' at Truman Medical Center. What kind of gun blows somebody's head completely off? I've got to get one of those.”

Facebook friend Angie Rosini responded, “Ya know, the cool thing is, is that this dude walked away from this unscathed.”

Wolf: “It reminds (me) of the scene from 'Terminator 2' when they shoot the liquid metal terminator guy in the face at close range and it kind of splits him open temporarily almost like a flower blooming. We all find beauty in different things."

So that was the dirt on Milton Wolf. And it was pretty good dirt! What about Pat Roberts? Well: There have been a couple of gaffes. It was revealed that he rents out his home in Kansas and stays with donors when he's in the state. He also made a verbal miscue of sorts when he said in a radio interview earlier this summer, "Every time I get an opponent — I mean, every time I get a chance, I’m home." Otherwise? He was attacked for being friends with former Kansas governor and Health and Human Services secretary Kathleen Sebelius, even though he called on her to resign and hates Obamacare and so forth. He has a 93 percent voting record by the Heritage Foundation's score, although he used to rail against "fringe" elements of the party. Scraping even further at the bottom of the barrel ... well, he's also like 543 years old and has been in Congress since forever. To some people that might mean, oh great, so he has seniority and will be able to deliver goodies for our state if Republicans retake the Senate. But to real conservative true patriot Tea Partyers, who reject pork and other special favors because they just think it goes to welfare for minorities they are our most honorable, selfless citizens, that means he has to go!

"There are virtually no policy differences between the two candidates," National Journal wrote in its attempt to figure out why the Tea Party hated Roberts enough to give him a scare. "And that has left both the campaigns and their allies grasping for attack material." And here's what the Tea Party groups backing Wolf had to say about their latest failure to propel a Senate candidate over the line this cycle:

Some of the groups backing Wolf concede that their efforts are as much about keeping incumbents looking over their shoulders as they are about helping the Kansas radiologist. Although they'd love to see their candidate in Washington, they give the impression that actually replacing Roberts isn't such a huge priority—admittedly a convenient position given that Wolf hasn't caught fire.

"In a general sense, we like to think this year we shifted the narrative, shaped the debate," said Tea Party Patriots spokesman Kevin Broughton, whose group is running ads for Wolf.

Sure, as National Journal writes, this is a "convenient position" for these groups after another one of their candidates lost. But they're right, too. The Tea Party challengers, while not successful, have kept the debate and incumbents' voting records far to the right of where they might otherwise be in Texas, Kentucky, South Carolina, Mississippi and now Kansas. Roberts' victory is another case of the "Establishment" candidate winning by sucking up all the "Tea Party" oxygen.