Wikipedia admins claim no owns the copyright to a pic snapped by a macacque. Next: Rise of the Planet of the Apes 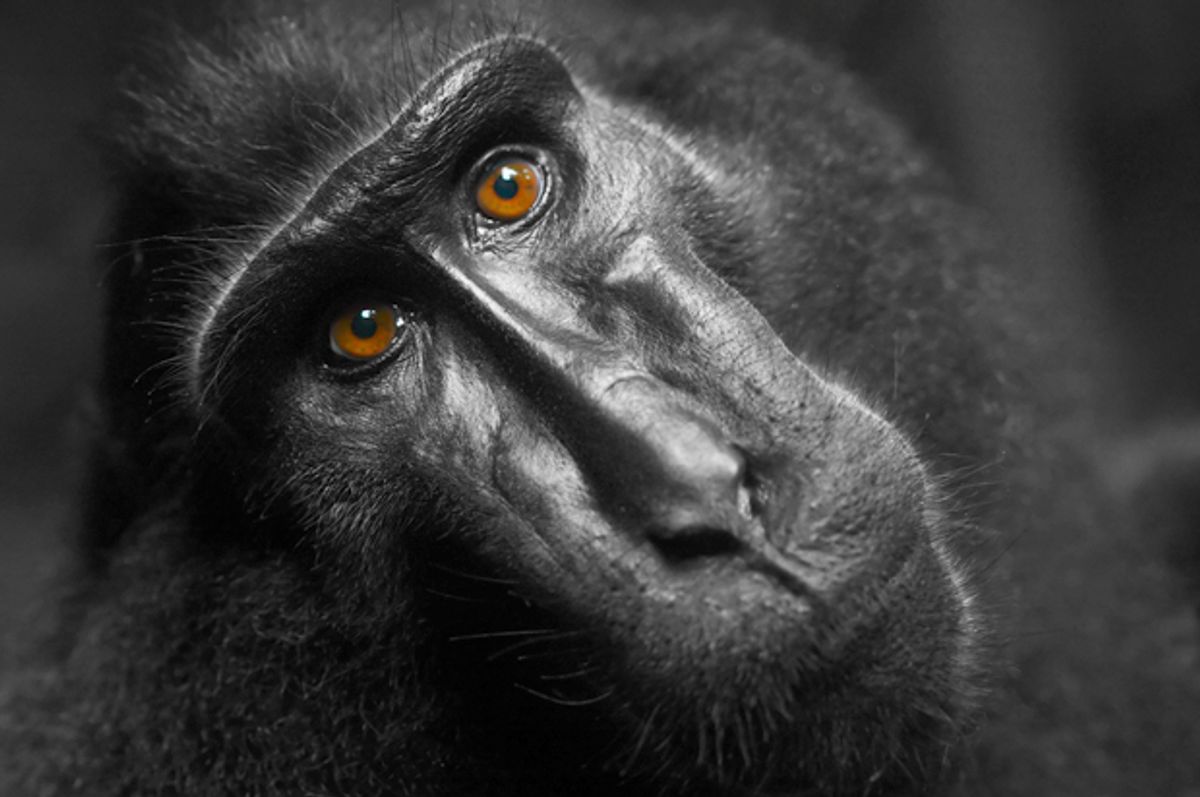 A photo of a different macaque monkey, taken by a human. (Dudarev Mikhail via Shutterstock)
--

This story has been updated and corrected.

Who knew that Wikipedia was a hotbed of cutting-edge advocacy for animal rights?

Because that's one conclusion that can be drawn from reports from the U.K. press that Wikipedia administrators are refusing to take down a selfie snapped by a black macaque monkey, on the grounds that the animal owns the copyright, because the animal took the picture.

The selfie at issue happened in Indonesia, after the macacque grabbed photographer David Slater's camera and started snapping hundreds of pics.

Slater is furious at Wikipedia, reports the Daily Mirror.

He said: "They have denied my request to take off their site.

"It makes me very angry, I'm a professional photographer - it costs me over £2,000 to do the trip. It's my livelihood.

Any artist whose livelihood is under assault from today's cavalier attitudes toward copyright can empathize with Slater. But there are some fascinating legal issues to ponder here. Because it is apparently true -- at least in some legal jurisdictions -- that the person who takes the picture is the person who owns the copyright, no matter who owns the camera.

The natural objection to this line of reasoning is obvious: Monkeys are not people!

But, what if they are? Or, more precisely, what if we aren't far from the day when monkeys finally win their right to have their day in court?

In April, the New York Times published a fascinating profile of Steven Wise, a lawyer who is fighting for the rights of imprisoned chimpanzees to file writs of habeas corpus. Wise's organization, the Nonhuman Rights Project, has yet to win any cases in court, but appears to be laying some solid groundwork for future chimpanzee liberation.

Along with chimps, the Nh.R.P. plans to file similar lawsuits on behalf of other members of the great ape family (bonobos, orangutans and gorillas) as well as dolphins, orcas, belugas, elephants and African gray parrots — all beings with higher-order cognitive abilities. Chimps were chosen as the first clients because of the abundance of research on their cognitive sophistication, and the fact that, at present, there are sanctuaries lined up to take in the plaintiffs should they win their freedom.

Anyone who ever felt sympathy for the plight of Curious George, tricked and kidnapped by the Man in a Yellow Hat, forcibly extracted from his jungle home, and sentenced to a life of servitude in the United States, is bound to feel similarly torn by the conditions faced by one of Wise's plaintiffs, Tommy, a former circus chimp who now lives in a dank cage on a compound in upstate New York.

A rancid milk-musk odor wafted forth and with it the sight of an adult chimpanzee, crouched inside a small steel-mesh cell. Some plastic toys and bits of soiled bedding were strewn behind him. The only visible light emanated from a small portable TV on a stand outside his bars, tuned to what appeared to be a nature show.

Wise's argument in favor of legal rights for Tommy is predicated on Tommy's ability to think for himself and act autonomously. How much of a jump is there, really, from Tommy's right not to be imprisoned, and a black macaque's ownership of the copyright to her selfie?

Of course, it would not do to underestimate the implications of giving all primates some measure of intellectual property rights. Stephen Colbert interviewed Steven Wise a while back about his crusade, and delivered a prescient warning:

"And what your desire for Tommy does to our legal system and the standing of mankind and our primacy in our vision of the universe, is just detritus, is just wreckage on the way to release one chimp."

To which Wise replied: " We can extend justice to wherever there should be justice."