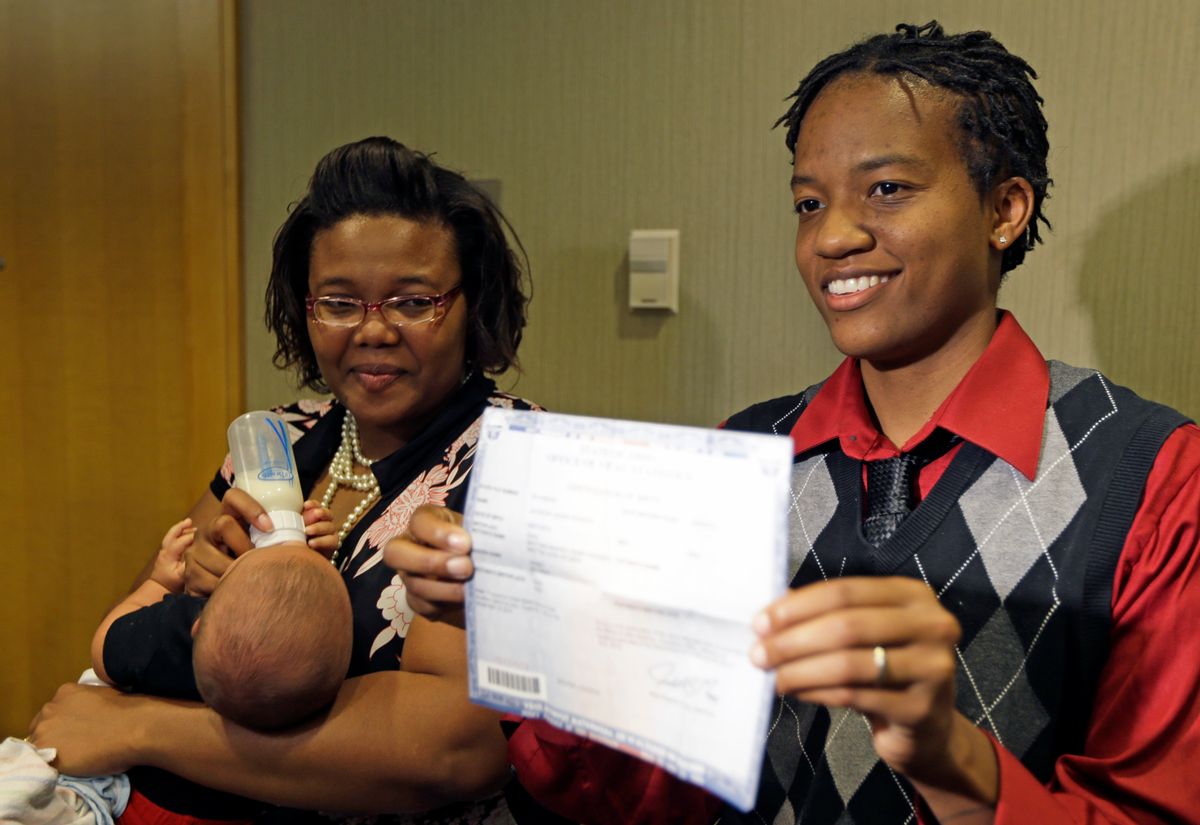 Kelly Noe, right, stands with her partner Kelly McCracken, as Noe holds a birth certificate for their daughter that has both of their names on it, Wednesday, Aug. 6, 2014, in Cincinnati. The couple are plaintiffs in the Ohio gay marriage case heard Wednesday in Cincinnati. A three judge panel of the 6th U.S. Circuit Court of Appeals heard arguments in six gay marriage fights from four states, Kentucky, Michigan, Ohio and Tennessee. (AP Photo/Al Behrman) (AP)
--

The Cincinnati-based 6th U.S. Circuit Court of Appeals heard arguments Wednesday on six gay marriage fights from Ohio, Michigan, Kentucky and Tennessee on Wednesday, setting the stage for one ruling. Each case deals with whether statewide gay marriage bans violate the Constitution. A look at them:

Kentucky has two cases, including a lawsuit filed by three couples last year seeking to have their marriages recognized by the state.

Plaintiff's attorney Laura Landenwich told the judges that Kentucky's law doesn't have a rational purpose and discriminates against same-sex couples. Waiting for voters to change the law is not an option, Landenwich said.

"There is a limit to the democratic process," Landenwich said. "The purpose of the Bill of Rights is to protect the minority from the will of the majority in a democratic society."

"Kentucky didn't take away any right that had already been given," Latherow said.

In July, a federal judge agreed with the couples, striking down the state's ban on recognizing out-of-state marriages. That ruling is on hold pending appeal.

In the other case, the same judge also struck down Kentucky's ban on issuing marriage licenses to same-sex couples. That ruling is also on hold.

Michigan's gay marriage fight began when a lesbian couple sued to change a state law that bars them from jointly adopting their three children.

The state's solicitor general, Aaron Lindstrom, said that any change in the state's ban on same-sex marriage should come through the political process.

"The most basic right we have as a people is to decide public policy questions on our own," he said.

Fundamental constitutional rights shouldn't be decided in popular votes, countered attorney Carole Stanyar, who represents the plaintiffs in that case.

"The Michigan marriage amendment gutted the democratic process," she said.

Ohio's two cases involve rights for gay and lesbian couples at the beginning of life and at the end. One case involves two gay men whose spouses were dying. They sued to win the right to be listed as the surviving spouses on their husbands' death certificates and for their spouses to be listed as having been married.

Cincinnati civil rights attorney Al Gerhardstein said the state's refusal to recognize out-of-state gay marriages violates the dignity of same-sex couples and amounts to unique discrimination, since Ohio has historically recognized marriages in other states that wouldn't be legal in Ohio, such as between cousins or involving minors.

Eric Murphy, Ohio's state solicitor, said that the state has traditionally defined marriage as between a man and a woman and that same-sex marriage is too new to be considered a deeply rooted, fundamental right.

A federal judge ruled in their favor. In a separate lawsuit, three lesbian couples in Ohio and one gay couple living in New York sued to have both spouses listed on their children's birth certificates. One woman in each Ohio couple was pregnant and gave birth this summer, while the New York couple adopted an Ohio child.

In a ruling, Ohio was ordered to list both spouses of each couple on their children's birth certificates. The judge also issued a broader ruling in the case, ordering Ohio to recognize all gay marriages performed legally in other states. That's on hold pending appeal.

Tennessee's case applies to the marriages of three same-sex couples who sued to be recognized on their children's birth certificates.

Tennessee Associate Solicitor Joseph Whalen told the judges that the state's law doesn't discriminate because it bars recognition of any marriage not recognized by state law, rather than singling out same-sex couples. Instead, Whalen said, Tennessee's law ensures that children are born into a stable family environment.

Plaintiff's attorney Bill Harbison said when the law was enacted in 2006, gays and lesbians weren't stepping up for their rights. That has since changed, but Tennessee hasn't, he said.

"It's as if Tennessee wants to wall itself off from the reality that gay and lesbian people are marrying," Harbison said.

In March, a federal judge in Tennessee issued an injunction against the state from enforcing the gay marriage ban against the three couples.

The lawsuit does not challenge laws barring same-sex marriage in Tennessee, only those that prohibit recognizing such marriages performed in other states.