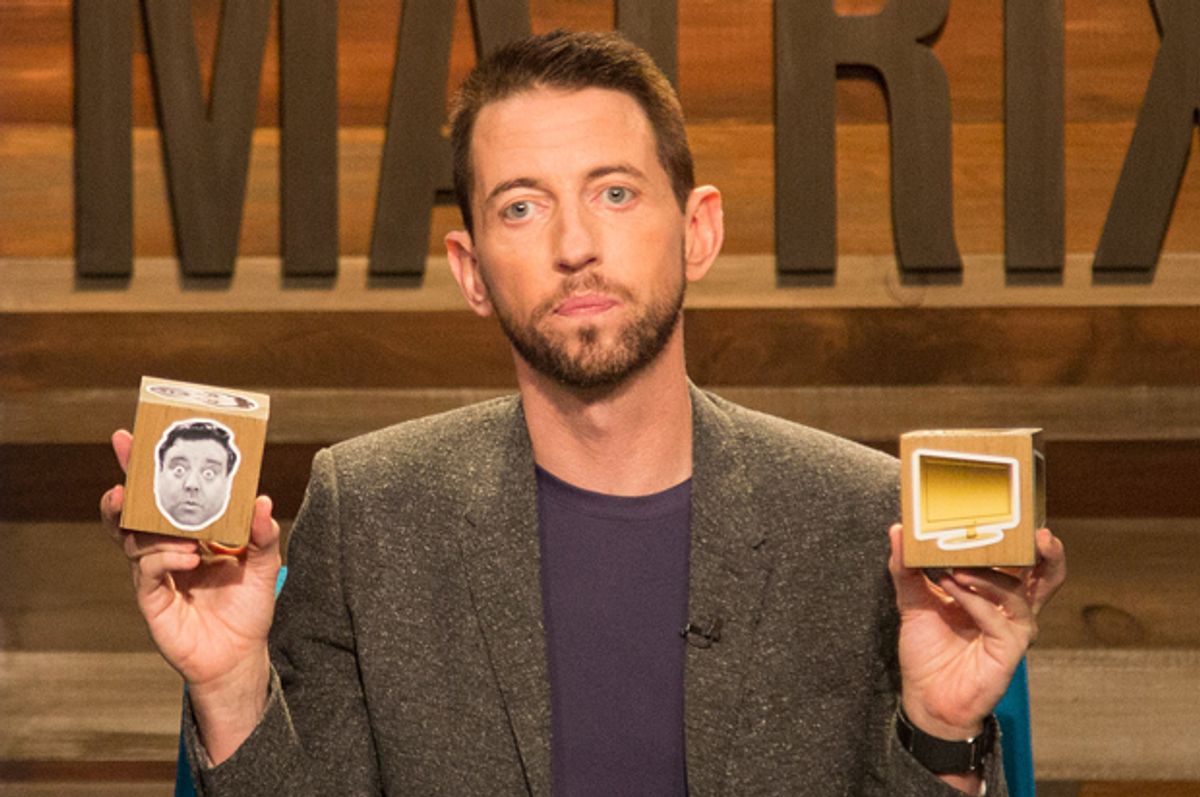 It's a bad sign when the first 20 seconds of your comedy show invoke the ghost of George Orwell. And yet that's exactly what happens in the third episode of SundanceTV's "The Approval Matrix," in which host Neal Brennan declares that "A case could be made that modern society is even worse" than the novel "1984." The episode's theme is "political correctness"; Brennan hectors young audience members for needing "trigger warnings and participation trophies." He later suggests that Donald Sterling was railroaded for acts that ultimately weren't a big deal and outright says that Sterling's girlfriend V. Stiviano "looks like a transsexual."

How did New York magazine's ingenious back-page feature end up here? The now-biweekly staple, which slots cultural happenings on axes from "Highbrow" to "Lowbrow" and from "Brilliant" to "Despicable," at its best evinces a very specific point of view, one that comments on how we sort through torrents of information and what surprising juxtapositions we uncover once we treat every reference point as equal. An opera may be snooty, but it can still be far less enjoyable than whatever "brilliant" piece of celebrity gossip comes down the pike.

"The Approval Matrix," which premieres on Monday, keeps the matrix (represented with blocks placed on a coffee-table grid) but chucks the fun. Each episode brings in a new panel and coheres around a single theme, and the tone is less excited at how much fun it is to contrast wildly divergent subjects than weary with whatever it is Brennan contemptuously forces himself to talk about. The political correctness episode is a low point -- rehashing old controversies that, even when they actually happened, generated more heat than light. The way Brennan consistently refers to people earnestly offended by Donald Sterling as "hall monitors" is both off-tone for an airy, light magazine feature, and pretty lowbrow despicable.

"The Approval Matrix" doesn't just miss the magazine's tone -- it veers in a wildly other direction, not least because of its untimeliness. One episode revolves around the groundbreaking idea that reality TV and social media have changed what it means to be famous, a conversation that was played out five years ago. And the pilot, on "The Golden Age of TV," features a discussion of where the 2012 controversy over diversity on "Girls" fits along the axes. Not that these issues aren't worth discussing, but ... are we really going to redo a two-year-old conversation about race and privilege here? On a cable show where issues are decided by putting blocks on a grid? With an all-white panel?

Three episodes in, it's fair to say that "The Approval Matrix" doesn't know what it wants to be; the magazine feature is so ineffable that a previous attempt to adapt it for TV, on Bravo in 2011, lasted a single episode. The second episode features a minutes-long disquisition from Jason Biggs on how annoying it is when his many fans confront him in public.

In the absence of an organizing principle, Brennan's personality dominates so much that the show can't really be said to be about a magazine feature. It's about Brennan, the sort of guy who sees himself as a radical truth-teller who's able to cut through all the rhetoric. In reality, he's joking about Punky Brewster getting raped (really!) or talking about forced "integration" on TV. The show feels like something from the culture-war 1990s, when battling against "political correctness" was an easy way to seem "with it." By now, though, it just feels tired. I was excited for a TV show that had some fun with pop culture -- but Brennan just seems angry. If this were a magazine, I'd unsubscribe.